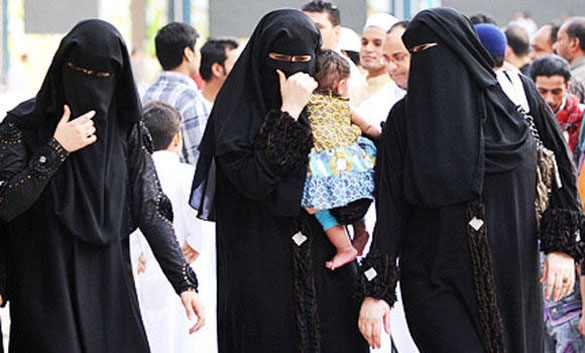 A surprising new category of expatriates wanting to leave the Kingdom have been turning up over the past few days at the Jeddah fingerprinting center to record their details — the dependent wives of expatriate workers.

These women are now following their husbands who are heading home after failing to rectify their status.

There are also women who are leaving their husbands behind in the Kingdom and hoping to return later.

Their husbands had arrived in Saudi Arabia on single-status contracts and had brought them over on either visit, Umrah or Haj visas.

They had broken the law by staying in the country.

Many of these women, from Sri Lanka, Pakistan and India, arrived with their children at the center in Rehab district.

None of them wanted to talk about why they waited until the last moment to sort their paperwork but it is clear that they tried and failed to rectify their status.

Others seemed to be going home for financial and family reasons.

There were wives of all ages at the center.

They waited for hours in the long queues while their children played nearby.

Many of the children were uncomfortable and cried because of the long waiting hours.

Most of these women had their original passports and did not approach their consulates and missions for the documents.

Muslim women must remove any face coverings to verify their identity to Western Australian police during a traffic stop, a new law says.

Previously, police didn't have the legal power to require women to show their faces if they refused on religious or cultural grounds. The only exception was during an investigation of serious offenses, Australia's ABC reported.

That was until the case of Carnita Matthews.

Matthews, a Sydney woman who wears a full Niqab, won her appeal against a six-month jail sentence for falsely accusing a policeman of trying to forcibly remove her face covering during a traffic stop in June 2010, News.com. au writes.

In quashing the sentence, the magistrate said he was unable to confirm whether Matthews had made the accusation. Why? Police had been unable to see the face of the woman who made the complaint.

An outcry followed with the public demanding the government create laws to prevent this from happening again.

According to AAP, the State's parliament passed the legislation Thursday after consulting with the Muslim and Sikh communities.

"Initially, the legislation stated police would be able to require someone to remove their headwear for the purposes of identification," acting Police Minister John Day said.

"However, following consultation with the Muslim and Sikh communities, the government agreed to change the word headwear to face covering."

Those who refuse will face penalties ranging from a $220 fine to 12 months in jail.

Shop owners are reluctant to report incidents of theft carried out by women for fear of attracting attention to other violations.

Owners often sacrifice taking legal action and restore their own properties after such a crime has been committed.

The emergence of regulated female gangs has recently surfaced after many were employed as shop assistants.

Muhammad Alwi, the CEO of a renowned mall in Jeddah, said they cannot count on thieves’ promises that they won’t enter the premises again since women’s faces are often hidden by a thick veil, he explained.

A female director of a shop at another mall lamented the fact that store owners refrain from reporting incidents involving women. “They fear getting caught for other offenses,” she said.

There is a great deal of discussion about 9/11, yet an important question is often overlooked: What have Muslim women been doing since 9/11 to promote peace and justice?

It’s a question few think to ask because according to our popular stereotypes Muslim women are either too in thrall to dangerous narratives of extremism or too downtrodden and subordinated to play an active role as agents for peace.

As curator for the International Museum of Women’s global exhibition, Muslima: Muslim Women’s Art & Voices, I’ve come to a very different view. In fact, I’ve come to realize that Muslim women are an unsung, secret resource in what you might term a global jihad for peace and justice.

While curating the Muslima exhibition, I’ve had the opportunity to meet hundreds of Muslim women leaders, writers, and artists from around the world. The diversity among these women is breathtaking: different languages, cultures, artistic expressions, different spectrums of faith. Yet I’ve discovered that the one passion that animates each woman beyond all other is the work she’s been doing over the past decade to create more tolerance and equality in her country through creative and often brave endeavors. For example, Egyptian graffiti artist SuzeeintheCity is using the walls of her city as a canvas to express her yearning for peace and self-expression. Graffiti art may not seem on the surface to be a form of serious resistance, but “when you live under a police state of constant oppression and fear,” Suzee in the City tells Muslima in an interview, “it’s only natural that the walls are completely bare and if there’s any art it’s government sanctioned and sponsored … [such as] support for Mubarak and his family.”

Add to this that the total adult literacy rate in Egypt is a mere 66 percent, making visual dissemination of information more effective than text, and the message of SuzeeintheCity and other street artists featured in Muslima becomes clear: In the face of their government’s escalating policing on freedom and rights, these resilient activists refuse to be bullied into silence.

Another woman who refuses to be silenced is Alka Sadat. Living in Afghanistan, where the Taliban once ruled and all forms of media were banned TV, magazines, newspapers, anything with images of people she bravely works as an award-winning documentary filmmaker.

When I spoke to her for Muslima, she admitted that whenever “I walk down the street I’m always afraid that someone may try to kill me.”

The Taliban and the government have tried to assassinate the subject of her latest documentary, Maria Bashir. The film, Half Value Life, chronicles the daily struggles of Bashir, who is the country’s only female prosecutor general. Working in Herat, one of the country’s most corrupt cities, Bashir has taken on the mission of educating women of their legal and Islamic rights to equality. Empowered by their knowledge, women are filing police reports in record numbers against male abusers.

When I asked Bashir why she puts her own life in danger to save other women’s lives, she told me that justice can only be reached when women are “aware of their rights… I tell them that if they work in the government of Afghanistan, they can have a significant role in the rule of law, and specifically justice for women.”

“The fact is that women understand and are key to confronting extremism because it is too often they who are the victims of it.”

Alka Sadat echoes Bashir’s sentiments, explaining that equality of gender rights will bring greater human rights to Afghanistan, which will result in peace. “If we have peace, it means more people can get an education and learn about women’s rights,” she says.

Why are Sadat and Bashir so convinced that greater justice for women will lead to greater peace? In a place like Afghanistan, the treatment of women can be a great litmus test for rising ideologies. With both the upcoming 2014 elections as well as the withdrawal of U.S. troops, the danger that the Taliban could return to power is a threat to not only the women in Afghanistan but to peace everywhere.

The fact is that women understand and are key to confronting extremism because it is too often they who are the victims of it.

Dalia Mogahed, the former executive director of the Gallup Center for Muslim Studies agrees that women are key to countering extremism, right at its very source. She says that when we listen more carefully to terrorists, what “we hear beneath the religious veneer is a fundamentally political, not religious, argument. From the Boston bombers to the gruesome murder of a British soldier in Woolwich, terrorists justify their violence by citing modern grievances not medieval exegesis.” Not only do terrorists groups like Al Qaeda represent fringe elements, Mogahed explains that Muslims are in fact “Al Qaeda’s number one victims.” Al Qaeda exploits young men’s “anger at oftentimes legitimate grievances, to recruit them into a life of crime.”

The best way to prevent this? “Women,” Mogahed says, “as mothers, teachers, scholars and community leaders play a vital role” in educating young Muslims to have a strong understanding that the Islam of the Quran is in opposition to the ideology of Al Qaeda.

Twelve years on from 9/11, as we commemorate our nation’s loss, let’s also set aside our stereotypes of Muslims and especially Muslim women to imagine the potential of a global jihad for peace. Far from being passive, Muslim women artists, community leaders, mothers are bravely leading the charge.