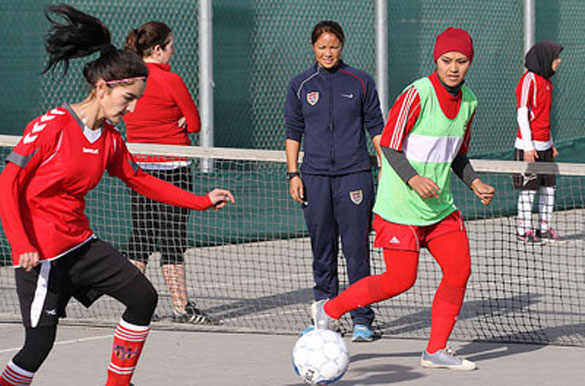 •  Protect our children from rapists

•  Children in limbo after Saudi father cons mother and flees

•  Tanzanian Legislator: Prostitution Shames the Nation, It Must Be Banned

•  Arabic learning: Where have all the men gone?

BISHKEK – The outlawed extremist group Hizb ut-Tahrir (HT) is actively coercing Kyrgyz women to carry out its radical agenda, putting them, their children and families at risk, according to authorities.

Because the recruitment of Kyrgyz women into HT is increasing, he said, authorities are now being forced to deal with the problem. It's a worrying trend and has a negative effect on the families of those recruited and on society as a whole.

The average female extremist is between 25 and 30 and lacks higher education, he said.

Women are being targeted, in part, because they are at an economic disadvantage to most men, Jeenbekov said, adding that the extremists typically lure women into the organisation by offering material support or other incentives.

After the recruited women are trapped, HT forces them to repay their debt by making financial contributions to the organisation, he said. If they can't make donations, they have to recruit new members.

Most female HT members are arrested for participation in extremist activities related to distribution of propaganda, he said. The women themselves prepare material, take it from the internet, download videos about terrorism and then hold meetings to spread the ideology to others.

A 2012 study of female extremism in southern Kyrgyzstan revealed that the majority of women involved with such extremist activities are typically unemployed and have several children, Tazhikan Shabdanova, programme director at the NGO For International Tolerance, told Central Asia Online.

Their involvement is "motivated by financial self-interest… and other forms of indirect financial assistance (help with debts and medical bills, distribution of food, and prize drawings)," she said.

HT targets women because, once indoctrinated, they become the most effective propagandists and recruiters, who almost always escape punishment, said Vladimir Shkolny, a lecturer in international relations at Kyrgyz-Russian Slavic University who specialises in studying destructive and totalitarian cults.

Women's accepted social role in Kyrgyzstan, in part, is to blame, he said. The extremists consider women better candidates to recruit because they can move freely throughout the republic, with authorities less likely to stop them for questioning, Shkolny said.

The MVD is keenly aware of the problem and is trying to reverse the trend. "Our directorate is constantly working to inform the public. We hold regular meetings... in villages, regions and towns," Jeenbekov said.

"We explain to them what the differences are between traditional Islamic beliefs and the banned destructive ones. We tell them what acts are criminal," he said. "The public is now well informed in this respect."

In addition, the government has devised various programmes to prevent women from falling victim to HT and other extremist organisations. "We are attracting women into [non-extremist] religious associations. This will allow women to work with other women, conducting preventative work such as holding meetings and conversations... as well as providing psychological support," Jeenbekov said.

A schoolgirl who secretly converted to Islam left home to live with an older man after being forced to marry him over the phone, it was claimed today.

The 15-year-old, whose British father is a Christian, is set to give evidence against seven men arrested in Mulhouse, eastern France.

All are accused of removing a child from her parents' care while running a sinister online dating site for Muslim converts.

After being introduced to young girls on the internet, men who subscribed to the site were allowed to wed them over the phone.

In the case of the teenager, who cannot be named for legal reasons, she completed her marriage vows and then immediately left home to live with him.

Detectives believe she was forced to convert to Islam in secret, along with three female friends aged 17, 18 and 19.

The girl's father informed local prosecutor Herve Robin after his daughter started wearing a burka and expressing 'extreme Islamist views', according to prosecutors.

'She had converted without her parents' knowledge after browsing social network sites on the internet,' said a source close to the case. 'Her father, who is British, was deeply shocked when he found out what had happened.'

Mr Robin confirmed that the schoolgirl was forced to marry the unnamed Muslim man, who is 28, 'over the phone'.

It was on May 6 that the girl's father first called police to tell them that his daughter had run away.

Using a signal from the 28-year-old man's mobile phone, police were able to trace him to an address in Valence, some 300 miles from the girl's home in Mulhouse.

When police raided the property they found the man living with his new teenage 'wife'.

She told investigating officers that it was her second 'marriage' on the site, and that her 'first husband' had denounced and rejected her.

The girl is now back in the care of her parents, while assisting police and prosecutors with their enquiries.

Her convert 'husband' has, meanwhile, been remanded in custody, along with four of the seven other suspects who all face prison sentences if found guilty.

Redad Rabih, a spokesman for the Muslim regional council in Mulhouse, said: 'Islam and the Muslim community had nothing to do with these despicable practices.'

He added that such internet sites, together with the abuse of young girls, made a 'mockery' of Islam.

LAGOS: Nigerian police on Wednesday said they had found six pregnant teenage girls in a raid on a house and arrested three people suspected of planning to sell their babies.

It was the second so-called baby-factory uncovered in a week in the west African nation.

"We acted on intelligence information and raided the house in Enugu (city) where we met six girls, under 17 and all pregnant, and freed them," police spokesman Ebere Amaraizu in southeastern Enugu state said.

He said two men and a woman believed to be operating a child trafficking ring were arrested during the raid on Monday and were cooperating with police.

Amaraizu said the girls had been "lured into the house with a promise of some money after" delivering a child.

"Investigation will unravel the details. We have to know how they came about the pregnancy and where they came from," he said.

Monday's raid came five days after police in nearby Imo State freed 17 pregnant girls and 11 small children from a home in the town of Umuaka.

The girls, aged between 14 and 17, told police that they had been impregnated by a 23-year-old man who is currently in custody. The owner of the building is on the run.

Nigerian police have uncovered a series of alleged baby factories in recent years, notably in the southeastern part of the country, but the intended buyers of the children have not been established.

Human trafficking, including the selling of children, is the third most common crime in Nigeria behind fraud and drug trafficking, the United Nations Educational, Scientific and Cultural Organization ( Unesco) has said.

Protect our children from rapists

THE alleged rapist: a 40-year- old restaurant manager, the victim a 13-year-old girl.

According to The Star and the Sabah Daily Express on May 8, the man was applying for the withdrawal of the rape charge before the Sessions Court in Kota Kinabalu as he is going to marry the girl.

Shockingly, the Deputy Public Prosecutor had not objected to the case being withdrawn, pending the marriage approval before the Syariah Court.

Is this the way our society treats underage girls where an alleged rapist may be allowed to escape jail sentence by promising marriage?

Should parents be allowed to marry off their girl-child for reasons such as poverty, culture or tradition?

Surely, laws like the Child Act 2001 and the Penal Code are legislated to protect our vulnerable children and the Government has a duty to protect them and ensure that justice is served.

When rape happens to a Muslim child, should she be treated differently from a non-Muslim girl?

Last October, Datuk Seri Nazri Abdul Aziz, the Minister in the Prime Minister’s Office, made strong statements about amending criminal laws so that mandatory jail terms will be imposed on those found guilty of statutory rape to address the high incidence of rape involving underage girls and to protect them against such vulnerability.

The Government must take action beyond talk to stop alleged rapists and paedophiles manipulating religion and culture to escape jail sentences.

In the Sabah case, since the permission to marry is allegedly pending before the Syariah Court, the issue is whether the Syarie judge should allow a man charged with the serious crime of rape to marry the victim?

Secondly, how would a girl-child who is only 13 years old said to be “ready for marriage”?

It is well documented that underage girls who are married off are more likely to face domestic violence and sexual abuse, and that there is an increased risk of death in childbirth for young brides.

At the end of the day when a child needs protection and justice, laws and institutions have failed when a marriage certificate is used to legitimise sex with children.

What happens to society when the promise of marriage is a means to escape prosecution for statutory rape?

Can we expect an alleged rapist to treat his victim-wife with decency and respect, worse still if she is a child?

The Attorney-General’s Chambers and the Syariah Court should exercise their good judgment and discretion to prevent such deplorable acts from continuing and preventing abusers from manipulating the justice system.

The Joint Action Group for Gender Equality (JAG) unequivocally calls for the following:

That the Syarie judge reject the marriage application for the 13-year-old girl, due to her inability to give a valid consent or that she is mentally unfit for marriage;

The Public Prosecutor to reconsider allowing the withdrawal of rape charges merely due to marriage, based on the existing clear facts of statutory rape, taking note of the huge age gap and the power differentials between the accused and the child;

The Convention on the Elimination of All Forms of Discrimination Against Women (CEDAW) prohibits all child marriages and betrothals. As Malaysia has acceded to CEDAW, the Government must take action to ensure all Malaysian laws comply with this principle; and

Immediate protection, counselling, support and assistance be provided to the victim and her family by the relevant authorities. The Child Protector should be using the full powers of the Child Act 2001 to intervene in the best interest of the child.

Laws and practices that are harmful to children’s well-being must be challenged and rectified.

We cannot allow our children to be sexually assaulted and yet do nothing to stop it. Our children need protection and we have a duty and obligation to protect them at all costs.

on behalf of Joint Action Group for Gender Equality (JAG)