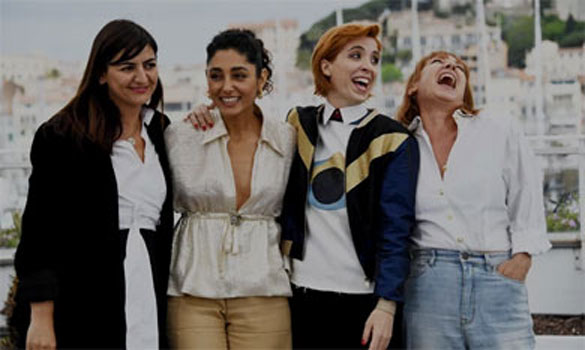 French film ‘Girls of the Sun’ team during a photo call at the 71st edition of the Cannes Film Festival in Cannes, southern France. (AFP)

CANNES, France: A harrowing film about Kurdish women fighters taking on Daesh terrorists sparked a furious row between critics at the Cannes film festival on Sunday — with some being accused of misogyny.

“Girls of the Sun,” which follows a platoon of Yazidi women battling the extremists who had enslaved them and their children, was premiered at the same time as one person was killed and four others wounded in a knife attack in Paris claimed by Daesh.

The movie, with Iranian star Golshifteh Farahani as a lawyer who picks up an AK47 to lead the Sun Brigade of survivors, is set in Kurdistan in the days leading up to the Nov. 13 Paris terror attacks, in which 130 people died.

The premiere followed a historic protest on the Cannes red carpet by Hollywood stars and female filmmakers demanding equal pay and an end to sexism.

But as the curtain came down, a shouting match erupted at a nearby screening for critics.

A small number who had booed the film were shouted down by others, who accused them of disrespecting the film’s female director and cast.

“It’s not about you, dude. Not your time to talk,” one said.

The divide was equally stark in the first reviews published Sunday, with the French magazine Telerama calling the war film “naive and inconsequential,” while others said it was a “disservice to a noble cause.”

But IndieWire’s David Ehrlich said it was impossible not to be moved by it and called it a “surefire Palme (d’Or) contender,” referring to the festival’s top prize.

He conceded that there “was a little too much paprika on the sandwich where none would have done nice, but (French director) Eva Husson is one hell of a filmmaker.”

French Producer Claudine Nougaret Depardon took to Twitter to condemn the “misogynous and condescending attitude to this beautiful and courageous film.”

She said: “Let’s fight to demand the early retirement for these (male) critics.”

The Guardian’s Peter Bradshaw also rallied to its defense, hailing it as a rousing “feminist war movie: Impassioned, suspenseful, angry.”

While admitting that some might find it naive and “unsophisticated.... for me it is heartfelt, forthright and muscular.”

But several French critics excoriated Husson’s handling of the story, arguing that some of the women characters were paper thin.

The Hollywood Reporter was also critical of its “narrative histrionics and a tear-jerking score worthy of a Walt Disney movie.”

But it praised Husson for “shining a light on an important and terrifying story that made headlines a few years ago but has since been forgotten by many of us.”

Speaking at the opening ceremony, ZERUJ Mall CEO Zehra Özkaymak denied reports that men were banned from entering the mall.

“Some speculations about a ban on men entering were made on social media. This is not true. Everybody is invited to the mall. We have created an atmosphere to enjoy for all the family,” Özkaymak said.

“I would like to thank my dear friends and store owners, women entrepreneurs who have come to this path by believing in us and trusting us, starting small-scale production in their homes five years ago,” she added.

Özkaymak also suggested that the mall could become an “apple of the eye” among many the Middle East countries.

A group of families and survivors of victims of a Tehran-Yasuj plane crash gathered in front of the Crisis Management HQ in Tehran on Sunday, May 13, 2018, demanding to receive the bodies of their loved ones. Yasuj is the capital of Kohgilouyeh and Boyerahmad Province in southwestern Iran.

The families had previously held a similar gathering in the same place on April 21, 2018, in protest to official delay in searching and finding the bodies and determining the reason for the crash after two months.

All 66 passengers and crew onboard this Iranian commercial flight belonging to Aseman Air died after the plane crashed on Sunday, February 18, 2018, into Mount Dena, (in the south of the country); the plane was 20 years old.

On the same day, families of those arrested during the protests all across Khuzistan Province, including a large number of women who are the mothers and wives of the prisoners, held a protest gathering outside the Revolutionary Court of Ahwaz in Kianpars and demanded to be informed of the fate of their loved ones.

On Saturday, May 12, 2018, in Tehran, a group of women and men plundered by the IRGC-backed Caspian Credit Institute gathered in protest outside the court for financial and banking crimes.

On the same day, a group of young women and men studying at Ferdowsi University of Mashhad, gathered on campus to protest against a deduction in educational years. Mashhad is the second largest city of Iran and capital of Khorassan Razavi Province in Northeast of Iran.

On Friday, May 11, 2018, a group of land owners including women and men held a protest in Hashtgerd, in Alborz Province (central Iran), against confiscation of their lands by government officials, demanding to have their lands returned as soon as possible.

The government conducts and will carry out projects to empower Turkish women whose rights and access to employment are often overlooked in male-dominated society.

In his party's manifesto ahead of the June 24 elections, President Recep Tayyip Erdoğan has pledged to end "every tradition of the age of ignorance targeting women." The Ministry of Family and Social Justice already works to empower women with projects to improve gender equality for women, which have lagged behind men in every field, courtesy of a patriarchal mindset.

The ministry's projects cover everything from increasing female employment to the fight against underage, forced marriages. One ambition for the government is to take the schooling rate for girls from 91.2 percent to 100 percent. Through a string of campaigns, girls and uneducated women will be encouraged to enroll in schools and literacy classes. The government will increase monitoring of families not enrolling their daughters in schools and will maintain monthly allowances for low-income families for every child in school. Girls' schooling rate is especially low in rural, impoverished areas often due to economic reasons where girls join the agricultural labor force at an early age.

Increasing the women's workforce is another primary concern for the government. It managed to bring it to 33.6 percent last year, from 23.3 percent in 2005, through a set of incentives for working women, from longer maternity leaves to financial support for daycare needs for working mothers, as well as payments to grandparents caring for their grandchildren with working parents. The government set the bar higher to increase the employment rate to at least to 41 percent in the near future and decrease illegal labor by women to at least 30 percent. As for female entrepreneurs, the government plans to extend loans to more women willing to set up their own business. Women are already provided up to TL 50,000 ($11,588) for loans.

Women will also have a greater say in politics with the lofty ambition of increasing the rate of female lawmakers in Parliament to above 14.73 percent. The government also plans to install more women in local administrations, university administrations and in the public sector in general.

CAIRO - 13 May 2018: Canadian projects in Egypt seek providing support to Egyptian women in the field of entrepreneurship through capitalizing on advanced and modern technological means, said Canada's Ambassador to Egypt Jess Dutton on Sunday.

The current contributions of the women in entrepreneurship represent 21 percent, while men account for 40 percent, the ambassador added.

"The embassy, in cooperation with its partners like the National Council for Women, is working on removing all hindrances crippling women's progress in the entrepreneurship domain," ambassador Dutton said while addressing a symposium held by the Egyptian Center For Economic Studies (ECES).

He pointed out to launching a number of programs, in cooperation with authorities concerned, to back entrepreneurship and offer financial support with a view to boosting equality between men and women.

In 2016, a group of veiled women marched on the main jail in Sana’a, Yemen’s capital. Their message to the Houthi rebels who had taken over the city was simple: we want to know what has happened to our sons and husbands — who had been seized — and we want an end to torture and executions.

Since then, the Mothers of Abductees have continued to protest. They meet almost daily in hotels and offices in Sana’a, in shattered provincial cities including Aden, and here in Marib, near the operational base of the ousted regime and its forces.

Three heavily veiled women meet us in Marib. They are leading networkers and organisers, sometimes marching, at other times working back channels to the Houthis to find out where they are holding the men and what they plan to do with them.

Both sides in the civil war accuse the other of human rights abuses involving civilians. Allies of the government have also been accused of indiscriminate aerial bombing. In 2016, a funeral was hit in Sana’a, causing more than 100 casualties. Last month the Saudi air force was accused of hitting a wedding party in Saada, killing 20 guests.

The women we meet produce precise statistics, laid out in Arabic and English in their annual report for 2016 and 2017. It is chilling. To date, 5,646 families have lost at least one male, kidnapped, tortured or killed by the Houthi justice system, which they say is illegal by international standards.

“This is my son Mohammed,” says Mariam Abdullak. “He was arrested for writing an article on Facebook against Houthi doctrine. He is now facing execution, along with 40 others. You have to understand that they are targeting writers, journalists and doctors even — anyone with a qualification.”

Her friend, Hasa Abdullak, claims the methods of torture are brutal, pointing at gruesome pictures in the report. “They use boiling water, and some they even turn like a chicken roasting on a spit. It is all completely illegal. The prisoners have no rights. Sometimes they are deprived of food.”

“This is my son Mohammed,” says Mariam Abdullak. “He was arrested for writing an article on Facebook against Houthi doctrine. He is now facing execution, along with 40 others. You have to understand that they are targeting writers, journalists and doctors even — anyone with a qualification.”

Her friend, Hasa Abdullak, claims the methods of torture are brutal, pointing at gruesome pictures in the report. “They use boiling water, and some they even turn like a chicken roasting on a spit. It is all completely illegal. The prisoners have no rights. Sometimes they are deprived of food.”

Yemen, men do not appear at the protests or conferences, but small boys often attend with their mothers.

The Houthi regime in Sana’a has a media arm — advised by Lebanon’s Hezbollah — which has proclaimed support for human and civil rights.

But the Mothers of Abductees say they have no dialogue with the authorities. They have 142 registered cases of torture, of which 19 led to death, they say. “They have methods like tying a left hand to a right leg and making the prisoner stand for hours in that position. They tie others up by the wrists and then hang them on a door or gate.”

The women we meet grow more animated as they talk. At first they said it was better to be anonymous, then all three give their full family name.

They are media savvy, using the internet as a main tool — not easy in Yemen — but seem frustrated at the lack of international attention.

“We need to take our voice to the world,” says Sabbah Hamid, handing me the tor