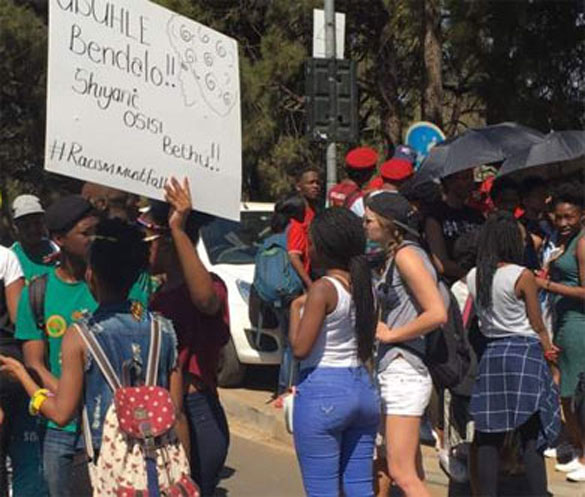 This one reads in Zulu: "Natural beauty. Leave our sisters alone”:

New Delhi: In the last eight years Aheda Zanetti the Sydney based inventor of Burkini has sold over 700,000 swimsuits.

Interestingly and ironically 45% buyers of her Burkini label Ahiida are non-Muslim women.

“This is about choice. The Burkini stands for freedom, flexibility and confidence, it does not stand for misery, torture and terror” said Zanetti in interview with Sydney Morning Herald.

Following the highly controversial Burkini ban in France which has been stayed by the highest court for the while Aheda Zanetti said that she received messages from her customers of various ideological leanings slamming the ban in one voice. A non-Muslim customer messaged from Warwick, Queensland saying that “It is just a swimsuit for heaven’s sake.” Another woman from US said that she is a skin cancer survivor who cannot go out in the sun in a regular swimsuit.

Zanetti says that people often mail her to know if the Islamic community would be offended if they (non-Muslims) don a Burkini swimsuit.

The news of Burkini ban in France has had an unanticipated effect. In the aftermath of ban Zanetti experienced such a surge in the demand for Burkini that her brand Ahiida has been compelled to change courier companies to enable faster delivery to Europe.

“Every time anyone says something bad about the Burkini, I get enquires and sales out of It.” says Zanetti.

She believes that Burkini has allowed many women to venture into sports and beach experiences which they would have avoided in absence of Burkini due to of health, body or religious concerns.

Speaking of Muslim-Burkini relationship she said that garment is a symbol of empowerment and female choice.  She added that Muslim women are more powerful than people think they are. “We choose to be modest’ said Zanetti.

Initially older Muslim women were hesitant in accepting the Burkini.

In 2007, Ahiida was asked to design Burkinis for the surf lifesavers, which Zanetti refers to as strongly symbolic of inclusion and integration.

The popularity of Burkini among non-Muslim women indicates that women like modest dress by nature, no wonder Islam is the fastest growing religion in Europe and majority of new converts are women especially.

New Delhi: A Muslim woman, who was divorced by her husband through a phone call from Dubai, has challenged the Muslim practices of polygamy, triple Talaq (Talaq-e-Bidat) and Nikah Halala, leading the Supreme Court to seek response from the Centre on her plea on Friday.

Like most Jersey girls, Sara and Sondos Elnakib loved to go to the Shore. As observant Muslims, they covered up as much as possible, improvising with yoga pants and long-sleeve shirts.

It was never ideal, so the advent of the Burkini — generally covering all but face, hands and feet — was welcome as it provided modesty in a comfortable garment made of swimsuit material.

#StopRacismAtPretoriaGirlsHigh trending on social media topic on Monday, after videos and photographs of pupils protesting at the school one of the pupils sporting an afro‚ went viral over the weekend.

PARIS: A restaurateur in a Paris suburb who apparently refused to serve two Muslim women sparked anger in France and called for protest, a media report said.

A video, widely shared on social media, showed the restaurateur telling the hijab-wearing women: "Terrorists are Muslims and all Muslims are terrorists," BBC reported on Sunday

The incident took place at Le Cenacle restaurant in Tremblay-en-France on Saturday.

Over 100 female cadets of the Afghan National Army (ANA) completed their education in Turkey and returned to Afghanistan today.

He was speaking during a ceremony to mark the graduation of the female army cadets and said the role of women in army is vital and the 109 female officers will start serving with the army in specific posts.

BERLIN — German federal prosecutors have indicted a teenage girl on charges of attempted murder and supporting a terrorist organization.