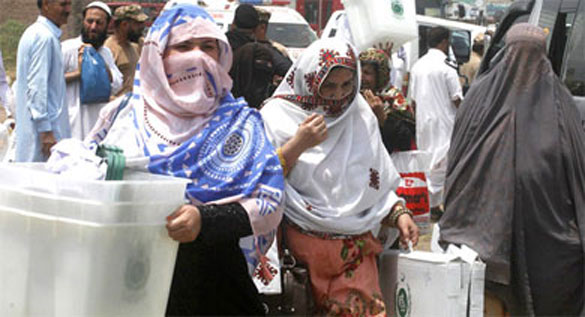 •  In A First, Women Contesting Elections in Pakistan’s Tribal Areas

•  Battle for Change Far From Over for Women in New Sudan

A female suicide bomber killed nine people - including two policemen - and wounded 30 others in Pakistan’s restive northwest Sunday in an attack claimed by the Taliban, officials said.

The attack happened at the entrance of a hospital in Kotlan Saidan village on the outskirts of the northwestern city of Dera Ismail Khan.

District police chief Salim Riaz told AFP that police were helping move the bodies of two of their colleagues - who had been shot dead by militants on Saturday - when the suicide bomber struck.

Another local police official, Malik Habib, confirmed the attack and casualty figures and said officers later recovered the mutilated head of the bomber.

Pakistan has seen an improvement in security in recent years, but low-level attacks are still carried out with devastating regularity - often targeting security forces in the northwest and the tribal regions bordering Afghanistan.

In A First, Women Contesting Elections in Pakistan’s Tribal Areas

Polling was held for the first time in Pakistan’s tribal areas, now merged in Khyber Pakhtunkhwa (KP), to elect 16 members of this provincial assembly on Saturday.

In the 16 constituencies up for grabs, almost all contestants were men. But two women are also in the race.

CCTV cameras were installed at several polling stations. Females also exercise their right of franchise in certain constituencies. Strict security measures were put in place. Army troops were deployed in a significant number. No violence was reported and polls closed at 5:00 pm without any disturbances, officials said.

The Election Commission of Pakistan (ECP) set up 1,897 polling stations across the region. Of them, 554 were declared highly sensitive and 461 sensitive.

A total of 2.80 million residents, including 1.67 million men and 1.13 million women, exercised their right to vote.

The seven remote districts along the border with Afghanistan were once a focal point in the global war on terror but were brought under the control of Pakistani authorities after the passage of legislation last year.

People in many districts lined up outside polling stations to cast their votes. The ECP finalised arrangements for elections and handed over the relevant materials to the polling staff in their respective areas.

While claiming to have adopted foolproof security for the polls, the government said as many as 34,497 security personnel were deployed across the tribal areas. They included personnel of the Pakistan Army, police, Frontier Corps, Levies and Khasadar Force.

Two women candidates, including Naheed Afridi of the ANP and Malasa of the JI, were in the run for PK-106 Khyber-I and PK-109 Kurram-II respectively.

Five seats reserved for women and non-Muslims will be filled through proportional representation of seats won by a political party.

Eight candidates are in the run for four seats reserved for women, while there are three contestants for a seat reserved for non-Muslims.

While all polling stations were established in the respective constituencies, certain stations of PK-110 Orakzai and PK-112 North Waziristan-II were set up in the adjoining settled districts for internally displaced persons.

Twenty-three polling stations have been established in Kohat for Mamuzai tribe, 23 in Hangu for Alikhel and Mulakhel tribes of Orakzai Agency, and 13 in Bannu for IDPs of PK-112 North Waziristan.

The ECP notified the deployment of the personnel of armed forces and civil armed forces outside every polling station and both outside and inside the highly sensitive polling stations from July 18th to July 21 for helping it conduct elections in a free, fair and transparent manner.

It assigned magisterial powers to the presiding officers and designated officer in charge of armed forces and civil armed forces for entire duration of their deployment in respect of offences under Elections Act’s Section 169 (personation) and Section 171 (capturing of polling station or polling booth).

Battle for Change Far From Over for Women in New Sudan

KHARTOUM: She may have spent 40 days in jail for demonstrating against president Omar Al-Bashir who has since been toppled but activist Amani Osmane says the battle for women’s rights in Sudan is far from over.

Women have been at the forefront of the revolt which led to Bashir’s overthrow by the military on April 11 after three decades of iron-fisted rule.

Osmane, who is also a lawyer, was detained on the evening of January 12 and escorted to “the fridge,” a grim room where interrogations are paired with extreme cold.

“There are no windows, nothing, just air conditioning at full blast and the lights on 24/7,” she told AFP.

The fridge is part of a detention center run by the all-powerful National Intelligence and Security Service (NISS) in a building on the Blue Nile that runs through Khartoum.

Dozens of activists and political opponents of Bashir’s regime have passed through what NISS agents cynically refer to as “the hotel.”

Osmane, who spent 40 days behind bars after a frigid seven hours of questioning, said she was arrested “contrary to all laws... because I stand up for women in a country where they have no rights.”

Another activist, Salwa Mohamed, 21, took part each day in protests at a camp outside the army headquarters in central Khartoum that became the epicenter of the anti-Bashir revolt.

Her aim was “to have the voice of women heard” in a Muslim country where she “cannot go out alone, study abroad or dress the way I want.”

Student Alaa Salah emerged as a singing symbol of the protest movement after a picture of her in a white robe leading chanting crowds from atop a car went viral on social media.

Portraits of Salah — dubbed “Kandaka,” or Nubian queen, online — have sprouted on murals across Khartoum, paying tribute to the prominent role played by women in the revolt.

Unrest which has gripped Sudan since bread riots in December that led to the anti-Bashir uprising left scores dead.

Doctors linked to the protest movement say that 246 people have been killed since the nationwide uprising erupted, including 127 people on June 3 when armed men raided the protest camp in Khartoum.

On Wednesday, protesters and the generals who took over from Bashir finally inked a deal that aims to install a civilian administration, a key demand of demonstrators since his fall three months ago.

The accord stipulates that a new transitional ruling body be established, comprised of six civilians and five military representatives.

A general will head the ruling body during the first 21 months of a transition, followed by a civilian for the remaining 18 months, according to the framework agreement.

“We will no longer wait for our rights, we will fight to obtain them,” said Osmane, stressing that women wanted 40 percent of seats in parliament.

Amira Altijani, a professor of English at the all-female Ahfad University in Omdurman, Khartoum’s twin city, said: “This movement is an opportunity for women to have their voice heard.”

“But a new Sudan is rising, with a civilian government that will allow equality,” she said.

RIYADH — Noura Al-Dousary was not sure of the success of her experiment but decided to go on with it no matter what the consequences. She was determined to break the monopoly of men over the laundry shops; so about four months ago she established her own shop in Riyadh which has so far proved to be successful.

She said the shop is entirely manned by Saudi women who are giving a different touch to the laundry of men and women clothes.

Noura said she employed seven young Saudi women and trained them on washing and ironing of the clothes.

"I wanted to empower women in the field of trade to help achieve the goals and objectives of the Vision 2030," she said.

She said she had carefully studied the project before venturing to make it a reality adding that her project was not only for economic gains but also for a societal objective.

Noura said the women proved to be good in laundry and she was able to attract a large number of customers in a short time.