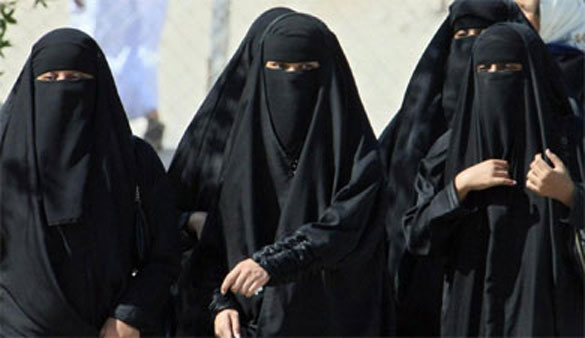 Under Saudi law all women must have a male guardian who gives them permission to study, travel abroad or marry AFP

Sex education has become imperative in the world today with mass exposure to sex on almost every media on any platform.

The topic still remains a taboo in many countries, especially those with a Muslim majority. In Egypt, one of the countries with a conservative Muslim majority, but with a population that aims to be progressively liberal to keep up with the world – much like Bangladesh – a female doctor has taken to YouTube to provide sex education.

Dr Alyaa Gad, the Egyptian-born, Switzerland-based, social worker has been working with Afham.tv, a YouTube channel, to promote sex education in Arabic.

She makes the videos in Arabic so that anyone in Egypt and the Arabic-speaking countries will understand them and benefit. Dr Gad’s gallant challenge to the norm has ruffled feathers and allayed many troubled teens.

In a country where sex is a taboo subject, her actions are a definitive mark of progress. She helps young men and women understand the changes they go through puberty, the function and importance of protection during sex, and sexual hygiene among others.

Since her lessons are only available on the internet, they do not reach people living in rural areas or weak internet coverage. Since then, she has contacted several NGOs and social health workers who carry the video on their phones or laptops to show to the people with no internet connections.

Her courageous and creative manner of promoting education has earned acclaims and threats almost equally from the Arab nations.

Alyaa Gad’s initiative aims to provide the native speakers of a local region with sex education in a way that is accessible and understandable by all. She recently received an accreditation from YouTube for reaching 200,000 plus subscribers. This only goes on to show how much traction her initiative has gained since the launch.

A Saudi man has been jailed for a year after he called for an end to the ultra-conservative Islamic kingdom's male guardianship system.

The unnamed man was also fined 30,000 riyals (£6,500) after being convicted of "inciting to end guardianship of women", the daily Okaz newspaper reported.

He was arrested while putting up posters inside mosques which called for the government to abolish strict rules giving men control over women.

The man admitted to pinning up posters in several mosques and said he solely launched an "awareness campaign" after finding some "female relatives were facing injustice at the hands of their families," the daily newspaper said, according to the Agence France Presse news agency.

Saudi law states that all women must have a male guardian, typically a husband, father or brother, who gives them permission to study, travel abroad or marry.

A Human Rights Watch report on male guardianship, published in July, found "a woman's life is controlled by a man from birth until death" in Saudi Arabia, as their ability to pursue a career or make life decisions is restricted.

Despite limited reforms in 2009 and 2013 to reduce male control over women, which included no longer requiring permission for women to work and making domestic abuse illegal, the report found the system remains largely in place.

The report led to a social media campaign, with women across Saudi Arabia calling for an end to the guardianship system.

Others took to Twitter, using the hashtag #TogetherToEndMaleGuardianship and an Arabic translation, to show their support and demand social reform.

The court claimed the defendant had launched the Twitter campaign.

In September, more than 14,500 women signed a petition calling for an end to the system and leading women's rights campaigner Aziza al-Yousef delivered the petition to the royal court.

Under increasing pressure from women’s rights activists, the Saudi government agreed to get rid of male guardianship in 2009 and again in 2013, but the system remains mostly intact.

Video of the incident shows three women launching a fiery rant against the male over the alleged racial slur, which they said was made in front of their nine-year-old nephew.

The clip, which was uploaded to social media site Youtube, shows the man attempting to shield his face from view after the females threatened to “name and shame” him for his behaviour.

It starts with one of the women yelling: “What do you want to say?,” after the man, who they claimed was drunk, reportedly muttered the racial remark as he was walking past them.

Having worked themselves into a frenzy, the male tells the outraged women to “calm down” as he starts swearing before trying to take the phone filming the scenes away from the group.

Are you on crack? You can't even speak English properly,” they shouted.

"You're not even educated, we're more educated than you."

Trying to calm the increasingly hostile situation a blonde woman, believed to be at the Hull shopping centre with the man, apologises to the upset group.

She told the women: "You two need to walk away and button it, just walk away, you're making it worse."

The incident is believed to have happened on December 28.

Uploading the footage to Youtube, one of the women wrote: "Me and my two sisters were walking with my nine-year-old nephew yesterday in Hull city centre at around 3.30pm when a drunken man gave us a dirty look and called us a f****** p***” in front of everyone!

"None of the bystanders did anything. This guy was pushing and coming at us to hit us!

"His wife apologised and tried to stop this."

It was a relatively cool evening after what had been a sunny day by the standards of otherwise moderate weather in a leafy neighborhood of Islamabad. I was in town after quite a few years and was expecting my friend to pick me up, but he failed to show up because there was some sort of a transport strike in the federal capital and he had to go pick her sister who was stuck on her way home from university.

I somehow managed my way to the friend’s home thanks to the newly-launched Metro Bus. But such uncertainty is the hallmark of public transport in the capital, especially when it comes to female commuters who already have very limited options in terms of commuting to their places of work on a daily basis.

Next day I met Hira Batool Rizvi, a young entrepreneur who has started a ride-sharing platform to ease off the burden of commuting for working women, providing them with safer and cheaper alternative — SheKab.

We sat at an upmarket restaurant amid the high-rise buildings housing head offices of multinational companies in the commercial hub of the city.

“Women working in offices around here pay around Rs25-35,000 per month just to commute between their office and home,” she said after our formal introductions, coming directly to the point, adding that “in most cases this sum amounts to more than 50 per cent of their total salary”.

A new service in Islamabad is empowering women drivers who cater exclusively to women clients as men, it believes, manage their commute conveniently. Really?

“I was also among these women till a few years back, but upon returning from the United States last year after completing my scholarship, I decided to launch a ride-sharing platform for women in Islamabad.”

Hira shared that the initial idea was derived from ride-sharing services like Uber and B&B in the US. “But considering the demographics and security situation of the country, we could not just initiate a service involving random drivers. So we devised a proper diligence and background check mechanism to screen the drivers,” said Hira.

Following the screening, the drivers were given proper training and were informed about the incentives and profits they can achieve by signing up with the service.

“Unlike other such initiatives which relied on newly commissioned fleet of cars/rickshaws and drivers, we commissioned the on-street taxi drivers who were already active to and from the capital and were well aware of the locations,” explained Hira.

“This made our initiative more practical and also didn’t make it a specific target; a win-win situation for both the drivers and commuters.”

In a span of few months, the service has expanded to around a hundred listed commuters and a fleet of about a couple of dozen cars, of which a few are driven by women drivers.

“Our main vision is to empower women drivers and to make our commuters with their own cars confident enough to share ride with others,” said Hira with a touch of activism in her voice.

A computer engineer by profession, Hira has developed an online portal through which women who need to share a ride can approach the company. There she maintains a list of commuters, and guides them through the services provided by company.

As our discussion came to an end, I bid farewell to her and came out of the cafe which was still bustling with activity as it was lunch time in the offices. It was hot even today and I had to look for a taxi as SheKab doesn’t share ride with men. I wondered why, and was told that it was relatively convenient for men to manage their commute.

“Only if they say so,” I thought while paying a hefty sum for travelling just a few kilo metres in a taxi.

JERUSALEM - A Palestinian woman was shot and wounded Friday after approaching an Israeli security checkpoint near Jerusalem with a knife, Israeli police said.

The woman approached the crossing point in Qalandia, between Jerusalem and the occupied West Bank, in a lane designated for vehicles despite repeated calls from guards to stop, a statement said.

She was wounded when security forces opened fire, police spokesman Micky Rosenfeld said. Police said she was 35 and from Issawiya, a neighbourhood in east Jerusalem.

A spokeswoman for the Israeli hospital she was taken to described her condition as “serious”.

She was left for around an hour after the attack on the ground before receiving treatment, an AFP photographer at the checkpoint said. Israel public radio said forces checked her for explosives before allowing her to be transported to hospital.

Since October 2015, 246 Palestinians, 36 Israelis, two Americans, a Jordanian, an Eritrean and a Sudanese have been killed in a wave of violence, according to an AFP count.

Most of the Palestinians killed were carrying out knife, gun or car-ramming attacks, according to Israeli authorities.

Others were shot dead during protests or clashes, while some died in Israeli air strikes on the Gaza Strip.