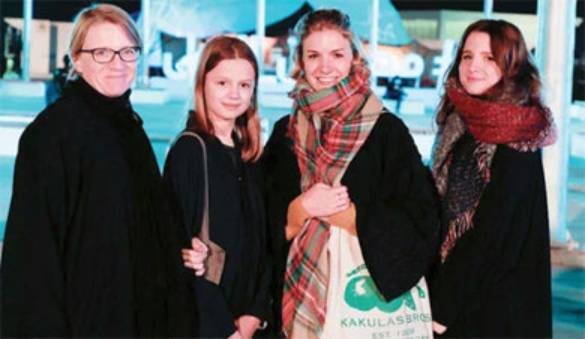 •  Most Saudi Women Marry In Their Early 20s

A primary school that controversially banned pupils from wearing hijabs appears to have backed down after the chair of governors announced his resignation following complaints from parents.

St Stephen’s primary school in Newham, east London, hit the headlines at the weekend after the Sunday Times reported it had banned Muslim girls under the age of eight from wearing headscarves, to the delight of campaigners who argued it enforces religious conformity on children.

That decision, along with curbs on children fasting on school days during Ramadan, upset many parents, who said they had not been consulted.

On Friday, the school’s chair of governors, Arif Qawi, said he was stepping down, telling colleagues in an email: “I wish the school continued success and am truly sorry that my actions have caused any harm to the reputation of the fantastic school.”

Qawi’s comments regarding “Islamisation” posted on social media attracted sustained criticism, while parents complained that they first heard about the ban through the media rather than the school.

The website for St Stephen’s posted a note on Friday, headlined as a uniform policy update, that read: “Having spoken to our school community we now have a deeper understanding of the matter and have decided to reverse our position with immediate effect.” The note was later amended to read: “The school has taken the decision to make the changes to this policy with immediate effect and this follows on from conversations with our school community. We will work with out school community to continue to review this policy going forward in the best interests of our children.”

Miqdaad Versi, the assistant secretary general of the Muslim Council of Britain, said his organisation welcomed Qawi’s resignation because of his “appalling” statements in support of the ban.

“This decision on religious symbols did not appear to target adherents of other faiths and appears to have been made without consulting the parents or community,” Versi said. “Yet serious questions remain unanswered as to the school leadership’s attitude towards Muslims, which are potentially discriminatory.

“It is deeply disappointing that a primary school with such a reputation has acted in this way. We hope that future decisions are made carefully and with full consultation with local communities.”

Amina Lone, an activist who has lobbied the government to bar hijabs in schools for young girls, was disappointed by the school’s U-turn: “A result of clicktivism in all its polarised glory. So much for choice and individual liberty. Terribly sad day for a secular democracy,” Lone wrote on Twitter.

Earlier this week, a group of Newham councillors criticised the school’s decision for creating a “toxic atmosphere” and called for the hijab ban to be reversed.

“It is troubling that the school has decided on a course of action that has clearly divided them from the very community they look to serve,” the councillors said in a statement.

The Department for Education’s policy is for individual schools to set their own uniform policies.

The Sunday Times had previously claimed that St Stephen’s was the best primary school in England last year, based on its outstanding key stage two test results. But the DfE’s performance tables show that a small number of other primaries achieved better results.

The school did not respond to attempts to contact it.

The club will enjoy the legal personality and full capacity to carry out legal acts necessary to achieve its objectives, and will work under the supervision of the Sharjah Women’s Sports Foundation.

The decree further stipulates that the club shall be based in the Emirate of Sharjah and can open branches in the emirate beyond following a decision by Director of Sharjah Women’s Sports Foundation.

According to the Decree, the Sharjah Sports Club for Women shall be managed by a board of directors whose president and members are to be appointed by a decision of the Director of Sharjah Women’s Sports Foundation.

RIYADH: Three women left Paris and headed toward Riyadh, where their mother works, and together they visited the second King Abdul Aziz Camel Festival in Riyadh’s southern Sayahdah district of Al-Dahnaa (120 km east of Riyadh).

Arab News spoke to Marie, who brought her daughters to the heritage village in search of an enriching adventure filled with knowledge, and she described everything she saw at the village as “awesome and amazing.”

Marie said several visits are required for touring and exploring the village and said that “the way Bedouin life was depicted is beautiful and reflects great attention to detail.”

One of her daughters suggested jokingly that they wished to see more camels in the village.

As she took photos, Marie said she would visit the village again to relive the experience, especially during winter, which is perfect for land trips.

“I am sharing everything I see here with my friends through social media because the village is worth being paid a visit,” she said.

Marie’s daughters enjoyed riding the camels and strolling across the park of Ta’aleel. They described the ride as a “unique, unexpected adventure, especially with the camels walking beautifully after each other in an organized manner.”

A number of Gonabadi dervishes staged a protest outside the governorate of Ko-Ar in Fars Province, southern Iran, on January 14, 2018, against arbitrary arrests of dervishes in various cities without presenting any reasons.

The State Security Force responded to this gathering by beating the protesters with batons. They also used tear gas and arrested a number of the participants. A pregnant woman, Raheleh Merrikh, was among those wounded because of the beatings.

Another woman, Fatemeh Soltani, a dervish from the central Iranian city of Yazd, has also been arrested in recent incidents.

Most Saudi women marry in their early 20s

DATA from the Saudi General Authority for statistics revealed important figures that reflect a number of demographic, social and economic characteristics in the Kingdom.

One of the interesting results of the survey was the fact that majority of Saudi men prefer to get married at the age of 25.3 years, while the average age of Saudi women marrying for the first time was 20.4 years old.

The results showed that Saudi women who were married at an early age (currently married, divorcees or widows) – and those who were married for the first time before the age of 20 - amounted to 46 percent.

According to statistics, out of every 100 Saudi women who were married, there were 46 women who married before the age of 20 years.

On the other hand, the survey brought to light that by the time a Saudi woman turned 32, her chances of marriage became very slim. This category of Saudi women who were aged 32 and unmarried, amounted to 2.95 percent.

In light of this figure, according to statistics, the proportion of those who were unmarried amounted to 10.3 percent.

This means that out of 10 females aged 15 and more who had never married, there was one girl who reached the age of 32 years and was unmarried.

SAUDI ARABIA is participating in five events with five clubs, namely United Basketball, the Green Jeddah Table Tennis, Saudi Arabia Fencing Federation Academy, Prince Nora University’s Athletics Club and one other, yet to be named, which will take part in the karate competition.

Sixty-nine clubs from 17 Arab countries have so far registered to compete in the fourth edition of the Arab Women Sports Tournament (AWST), with more expected to sign up before the 11-day event begins on Feb. 2 at 10 venues across Sharjah, according to organziers.The Supreme Organizing Committee (SOC) of AWST 2018 has confirmed that the UAE, Saudi Arabia, Jordan, Kuwait, Bahrain, Oman, Morocco, Algeria, Lebanon, Palestine, Sudan, Egypt, Libya, Iraq, Yemen, Somalia and Djibouti will all be participating.

Themed ‘The World is Your Court, Together Victorious’, the tournament, organized by the Sharjah Women’s Sports Foundation (SWSF), will be held under the patronage of Her Highness Sheikha Jawahar Bint Mohammed Al Qasmi, wife of the Ruler of Sharjah and chairperson of the Supreme Council for Family Affairs (SCFA) and chairperson of SWSF.

The clubs will compete in AWST’s nine sports: basketball, volleyball, table tennis, fencing, archery, shooting, athletics, show jumping, and karate – which will be held for the first time – flying the flags for their countries in world class international arenas across the emirate.

Nada Askar Al Naqbi, deputy head of AWST’s SOC, head of its Executive Committee and director General of SWSF, said: “We are extremely pleased with the response to AWST 2018, which has demonstrated the tournament’s leading status as a pan-Arab sporting event for women, attracting not just the highest number of athletes and clubs from the Arab world, but the highest quality. And we are expecting even more entries, which will add further to AWST’s presence on a worldwide sporting platform.”

Al Naqbi pointed out that the increasing number of participants also reflects the success of promotional tours and media campaigns carried out by AWST’s SOC in Saudi Arabia, Morocco and Jordan under the directives of Sheikha Jawaher.

With the most comprehensive field of athletes, the UAE is taking part in each of the tournament’s nine disciplines represented by Sharjah Sports Club.

Yemen will be represented in the tournament with the Girls Sports Club, which will take part in shooting, karate and archery, while Palestine will participate with two clubs, Al Wasl Volleyball Club and Al Wusta Archery Club.

In 2016, Dr. Sheikh Sultan Bin Mohammed Al Qasimi, Supreme Council Member and Ruler of Sharjah, issued an Emiri decree establishing SWSF as a corporate body enjoying financial independence with full capacity to carry out the necessary legation transactions to achieve its goals. Sheikha Jawaher is the chairperson of the SWSF, assisted by an advisory committee consisting of highly qualified members with vast experience in the foundation’s areas of work.

Men and women cheated by state-backed financial institutes staged protests on January 17 and 18, in the Iranian capital.

On Wednesday, January 17, 2018, people cheated by Samenol Hojaj institute staged a gathering outside its building on Karim Khan Avenue in Tehran to demand their stolen deposits. For over three years, the IRGC has swindled people through this company.

Also on Thursday, January 18, 2018, a large group of women and men plundered by Caspian institute gathered outside its office in Tehran’s Saadatabad district to protest the stealing of their money and property. They chanted slogans against government-backed thieves and pelted eggs at the company’s doors and windows.

Clients cheated by Caspian have been staging protests since July 23, 2018.