Doubts over Saudi Order Said To Ease Control on Women 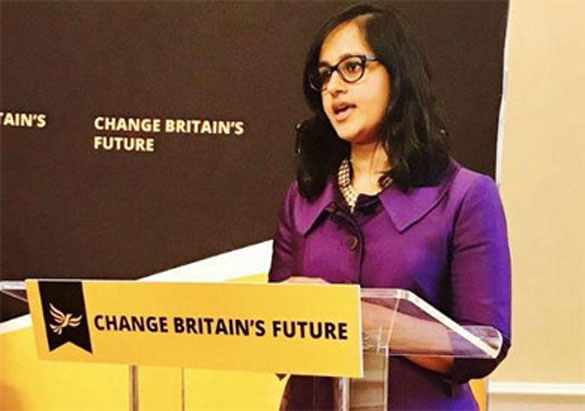 A British-Pakistani politician, Amna Ahmad, is hoping to make it to the parliament

Doubts over Saudi Order Said To Ease Control on Women

RIYADH - Saudi women no longer need a man’s consent to carry out certain activities, local media reported on Friday, but activists said the royal order does not go far enough.

Saudi Arabia has some of the world’s tightest restrictions on women, and is the only country where they are not allowed to drive.

Under the guardianship system a male family member, normally the father, husband or brother, must grant permission for a woman’s study, travel and other activities.

But the Arab News said a royal decree issued by King Salman ordered that women are no longer required to obtain a guardian’s consent for official services “unless there is a legal basis for this request” under Islamic law.

Government agencies were advised of this directive, the report said.

Other Saudi media including the Sabq online newspaper, which is close to authorities, have carried similar reports.

Sahar Hassan Nasief, a women’s rights activist in the Red Sea city of Jeddah, welcomed royal attention to the issue but said it remained unclear what will change under the decree.

Nassima al-Sadah, an activist in the Gulf coast city of Qatif, said she does not think the government is about to end guardianship. “Maybe they will just reduce it,” she said.

Last year thousands of people signed a petition calling for an end to guardianship.

Activists say that even female prisoners have to be received by the guardian upon their release, meaning some have to languish in jail or a shelter beyond their sentences if the man does not want to accept them.

Although the government no longer requires guardian permission for women to work, Human Rights Watch said in an earlier report that many employers still demand guardian consent in order to hire a woman. Some hospitals also require a guardian’s approval before carrying out medical procedures, it said.

Activists say that if they have open-minded male family members, getting their consent is not a problem.

Islamabad: The Election Commission of Pakistan (ECP) and National Database & Registration Authority (NADRA) on Friday signed a memo under which the latter will provide its services to the former by issuing maximum identity cards to women voters, leading the next general election 2018.

Later, the NADRA chairman met with the Chief Election Commissioner of Pakistan Justice Sardar Muhammad Raza at the ECP Secretariat.

The chief election commissioner highlighted the gap of 12.17 million between men and women registered voters and stressed that the NADRA take special initiatives to increase registration of women enabling the ECP to register woman voters to bridge the gap. The NADRA chairman said that the registration body was taking initiatives to issue national identity cards to women and showed his commitment to decrease the gap.

The chief election commissioner showed satisfaction over the services of NADRA, being provided to the ECP.

RABAT, Morocco: A former radical preacher is the unlikely instigator of a debate on a topic long seen as off-limits in Muslim-majority Morocco: women’s inheritance rights.

The country’s Islamic family laws allocate female heirs half the amount men receive on the death of a relative.

Abdelwahab Rafiki, a former hard-line cleric who served time in jail following jihadist bombings in Casablanca, says it is time that changed.

“I invite... religious scholars, sociologists and human rights actors to open a dialogue, primarily in order to uphold justice,” he said.

Rafiki, also known as Abou Hafs, was one of around 100 male writers, journalists and artists who published a book in April called “Men defend equality in inheritance.”

He also appeared on a prime-time television show on the popular 2M channel, arguing that the social roles of men and women had changed since the early days of Islam, meaning it was time for a debate on inheritance rules.

Since his TV appearance, he said, “I have been threatened with death and excommunicated, but I also received many messages of support.”

The 43-year-old was once regarded as a leader of the Salafist-jihadist movement in Morocco.

He was among 8,000 people arrested after jihadist bombings in Casablanca in 2003 killed 45 people.

Sentenced to 30 years in prison, he was pardoned in 2012. Last year he stood for election to parliament representing Istiqlal, a conservative nationalist party.

His efforts to spark a debate on inheritance have won him plaudits from the liberal media and condemnation from his former peers.

“Thanks to 2M and Abou Hafs, a new step has been taken in Morocco: equality between men and women in matters of inheritance can now be raised in the public sphere,” local site Medias 24 said.

Weekly magazine TelQuel said he had begun “dismantling one by one the dogmas of radical Islam.”

But Abou Hafs has also received anonymous death threats on social media and been expelled from a national organization for religious scholars.

He has been denounced by the likes of Mohamed Fizazi and Hassan Kettani, preachers who were also jailed and later pardoned after the Casablanca attacks.

“He didn’t just turn his coat inside out, he tore it up,” Fizazi said.

Kettani said inheritance rules were not just a “red line” but an “impassable wall.”

Islamic scholars argue that the Qur'an allocates women half the inheritance given to male heirs because men are responsible for protecting women and providing for them.

They say the rules were a major improvement on women’s rights in pre-Islamic Arabia.

But Abou Hafs argues that the issue is open to “ijtihad” — the process of interpretation by religious scholars.

“The issue of inheritance must be consistent with evolutions in society” in order to “protect” Islam, he told AFP.

It is not the first time the subject has triggered controversy.

In 2015 Morocco’s official National Council of Human Rights (CNDH) called for women to be guaranteed the same inheritance rights as men, arguing that “unequal inheritance legislation” made women more vulnerable to poverty.

Outraged conservatives rejected any debate on the issue and the ruling Justice and Development Party (PJD) slammed the organization for its “irresponsible recommendation.”

But Nouzha Skalli, a former women’s rights minister, said the lines are moving.

“Until recently, the question was taboo — you couldn’t even debate the subject,” she said.

“As soon as you said the word ‘inheritance’ you were accused of blasphemy. Today, the debate can be held openly.”

“The time has come to break the taboo, which hides major injustices against women,” she said. “The Qur'an says that God is against injustice.”

PESHAWAR -  The women legislators of Pakistan Muslim League-Nawaz (PML-N) on Friday staged a walk out from the provincial assembly after Deputy Speaker Dr Meher Taj Roghani did not allow them to present their resolution against provincial minister Shah Farman for passing “derogatory remarks” against a woman legislator in the House.

In her speech, Tahirkheli said that she had assured the protesting women legislators that the matter would be taken up in the House. She said that as both concerned parties including the minister and woman legislator are absent from the house, the matter should be deferred till the presence of both parties in the house.

Dr Roghani announced that the matter of the resolution of women legislator against the minister may be decided on coming Monday.

Meanwhile, discontent in the ranks of the PTI legislators surfaced again on the floor of the provincial assembly when the former leader of disband forward block Qurban Ali Khan complained of injustice with him in connection with the development schemes in his electoral constituency.

Talking on a point of order, he said that all members of the house are getting development funds under the heads of electrification and other schemes, but he had been denied this right. He said that in his constituency non-elected people have been tasked for execution of development schemes, which is sheer injustice with him.

He said that he had already talked to Khyber-Pakhtunkhwa Local Government Secretary and now he is using the elected house for raising voice against the injustice and if justice was not provided then he will use other forums including media and will also move the judiciary.

Disposing of the matter, the deputy speaker said that the matter is of high importance and asked the mover to raise it in the house either through adjournment motion or calling attention notice. Later the house was adjourned till 3pmon coming Monday.

LONDON: A British-Pakistani politician is hoping to make it to the parliament in the elections scheduled for June 8 to counter the hard Brexit agenda of the Conservative party.

Amna Ahmad, who was born in Lahore and moved to South London as a child, has made her mark in national politics by articulating her views on behalf of Liberal Democrats, Britain’s third-largest party. She has been selected to run as the Lib Dem Parliamentary candidate for Sutton & Cheam which is considered a safe Lib Dem seat. But for Amna there is nothing for granted and every vote has to be fought for.

“I campaign everyday from 8AM to 11PM and try my best to win this election for my party... [I want] to serve the local communities and to speak on behalf of those whose voices have been drowned out,” she told Geo News in an exclusive interview.

When asked how she ended up in Liberal Democrats when most ethnic minorities have traditionally voted for the Labour party, she replied: “The Labour Party take us for granted. They think that we are in their pocket and that we are for them, they take us for granted. I think we need to look at the policies of all parties and see whether they represent you or not—and today Liberal Democrats represent our communities better. In Sutton and Cheam where I am standing, for Lib Dems there are no safe seats but we have a big opportunity, we have the local council, we used to have the Lib Dem MP. We have a good opportunity there.”

Recalling how she opposed the Iraq war and campaigned against, Anam said that she joined the Liberal Democrats mainly for this reason and also to be able to speak up for others and against injustice.

“Before this, of course, there was a lot of prejudice and fear because of terrorism internationally..and also because of this fear that Muslims are coming in. In Britain, the Muslim community has shown time and again that actually we are very proud of secular, liberal British values, that we are part of this community. I think we have shown that over and over again that we are in a position to fight other forms of prejudice. Islamophobia is very dangerous and I find it very frightening. If I am elected I will fight against it.”

Amna Ahmad said that her Pakistani background is a source of strength of her and she takes pride in being of Pakistani descent.

The parliamentary hopeful said that there is a lot Britain can learn from Pakistani cultural values. “For me, Britain can learn a lot from Pakistani culture, it’ s the community that I am so proud of. We hold our community very close. We never let our the elderly on their own. They are looked after and these are the values that are so important and actually very British values in many ways. And these are some of the things that I bring and Liberal Democrats stand for these values.”

She has said that she saw troubles within her family while growing up in South London and have had to deal with authorities at a very young age which gave her lot of confidence.

Amna said that Theresa May and her party cannot be trusted with the hard Brexit and it was important to oppose them. She said that it will be a foolish mistake to give May a blank cheque.