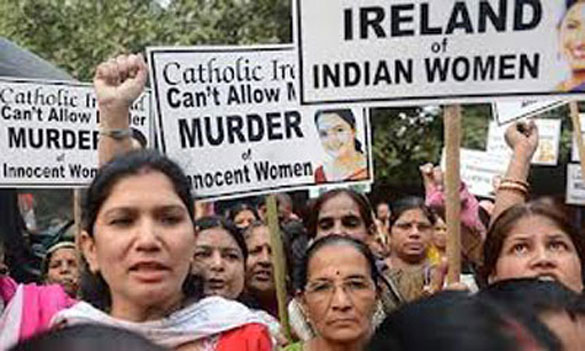 •  Hundreds of Irish Women Forced To Come To Britain for Abortions

•  Gulf Female Journalists Forum to Kick Off In Kuwait Today

•  Indonesia: Parents of Street Kids Will Be Jailed

Photo: Hundreds of Irish Women Forced To Come To Britain for Abortions

BRITISH-based Muslim extremists want the schoolgirl shot by the Taliban to face a possible death sentence.

The radicals will head to the Pakistani capital of Islamabad to link up with hardliners for a demonstration urging a fatwa against Malala Yousafzai.

The 15-year-old campaigner was shot in the head after she called for girls to have the right to attend school.

UK-based Islamist Anjem Choudary has led the anger aimed at Malala who is recovering at Queen Elizabeth Hospital in Birmingham.

Zealots claim she is an apostate, or traitor, to Islam because she wrote an online diary for BBC Urdu slamming the Taliban for denying girls the right to education.

The conference billed as “Sharia4Pakistan” is due to be held at Lal Masjid (mosque) in Islamabad on November 30 and will feature a video address from al-Muhajiroun founder Omar Bakri Mohammed, titled “Declaration of Fatwa on Malala Yousafzai”.

The punishment for apostasy, or regressing from Islam, can under certain reading of Islamic law mean a death sentence.

East London-based Choudary told us: “There is no covenant of security in Pakistan for non-Muslims. If someone apostasies (renounces) Islam they become like the non-Muslims.

“They no longer have any form of protection. What we say very clearly is any non-Muslims in Muslim countries need to leave because they are at risk.

“And those people who are apostates (like Malala) and want to stand with the enemy against Muslims, they are naturally the first people that are going to be targeted.

“If someone apostatises like this woman did by allying with the Americans and saying her favourite person is (Barack) Obama and that she does not want the Sharia or hijab and wants to live under a secular state, she has put herself in a very precarious situation.

“It is no surprise what happened to her in Pakistan.

“Malala is mature islamically, she is not immature, and she has reached that period we say is adulthood.”

Meanwhile Omar Bakri Mohammed, 54, formerly based in the UK and now hiding in Lebanon, told the Daily Star Sunday: “The only solution is the implementation of the Sharia. She (Malala) should face justice in an Islamic court.

“We are going to renew the Fatwa against the man-made law and systems in Pakistan – this is why women like this young girl are rejecting Islam. The system is not being implemented properly.”

But last night one leading moderate Muslim figure described the plan as “ludicrous” and a “stunt”.

Dr Taj Hargey, imam of the Oxford Islamic Congregation and director of the Muslim Education Centre of Oxford, said: “The fatwa is just a religious opinion it does not carry any legal weight – certainly not in this country. This is a totally ludicrous religious opinion by a bunch of ultra-radical religious extremists.

“This is just another stunt by the self-styled religious cleric Anjem Choudary.

“He should be focusing on what Muslims can do to become better integrated rather than being a rabble-rouser and a troublemaker.

“Thinking Muslims should all contribute to a one-way ticket for these people to leave this country, leave the British passport at Heathrow and go on to Wahabi land or Sharia land and stay there forever.

“This brave girl is not a heretic or apostate. For her to be deemed outside the faith because she wants to be educated is totally beyond the pale.”