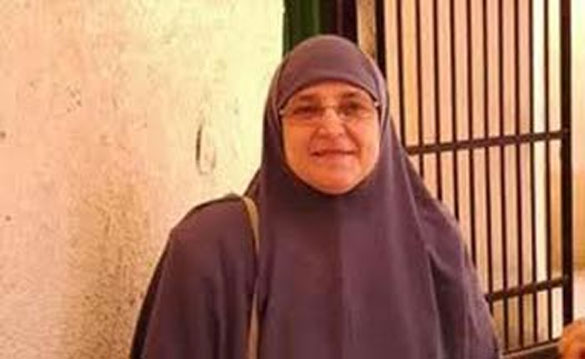 •  What Morsi Means for Women, Israel and the U.S

A British man, returning to the United Kingdom refused to allow a Muslim woman civil servant to check his passport.

“I don’t want to be seen by that,” Anthony Holt, 65, was quoted by local British news sources as saying of the woman, who wears a hijab

Holt has been fined 145 British pounds and ordered to pay another 100 for compensation over the anti-Muslim tirade and abuse directed at the customs official.

According to his lawyer, the 65-year-old had become upset up after reading an article in the Daily Mail about the “victimization of Christianity” on a flight into Manchester.

At immigration, the retired consultant then refused be checked through by Sayima Mohammed.

As Mohammed burst into tears, her colleagues refused to check Holt’s passport and ordered him to calm down.

When police arrived, Holt turned his attention to a police officer, saying: “That’s Islam. I’m not going to that. This is my country.”

During a police interview Holt claimed the abuse was not “personal.”

He said: “The problem I have is with Islam as a whole. It’s threat to the British population and the British way of life. I wanted to take a stand.”

But Muslims in the UK are concerned that Holt is simply a result of the anti-Islamic rhetoric being spouted by conservative newspapers and tabloids in the country that are fomenting anti-Muslim sentiment across the country.

Even before they seized full control of the Malian city of Gao this week, Islamist militants imposed sharia law on the town's residents.

Fall spoke to the head of the school, Amadou Sidi Toure:

Fall says that he noticed the classes are segregated. Toure says, “That is because the Islamists demanded that boys not be seated next to girls.”

The schools in Gao were shut down in April when the Tuareg separatist group MNLA and Islamist group Ansar Dine seized control of northern Mali. However, Toure and other teachers organized an informal school for students trying to get their high school diploma or trade certificates.

Fall noted that, while most women in Gao are wearing Islamic headscarves, the director of Gao's pedagogic training center, Toure Oulematou Maiga, does not.

Maiga says, “I am almost veiled!” and laughs. She adds, “It is our tradition to wear the veil on our shoulders.” Fall says, “But the Islamists want you to wear it over your head, baring only your eyes.” Maiga replies, “Yes, but I don't, because I prefer it this way, and I have never had any problem.”

Fall spoke to several students at the school who said they do not mind being segregated. One girl, Siatou Toure, said she does not mind wearing a veil either, although, she adds, she feels forced to wear it.

As noted in an earlier report, Fall found that some residents of Gao have defied efforts by Ansar Dine and the al-Qaida-linked group MUJAO (The Unity Movement for Jihad in West Africa) to enforce their strict form of sharia, or Islamic law. It remains to be seen whether that defiance will continue now that the MUJAO group has driven the MNLA out of Gao.

CAIRO: Naglaa Ali Mahmoud wears an Islamic head covering that drapes down to her knees, did not attend college and never took her husband's last name, because that is a Western convention that few Egyptians follow. She also refuses the title of first lady, in favour of simply Um Ahmed, a nickname that identifies her as the mother of Ahmed, her eldest son.

Egypt has a new leader, Mohamed Morsi, the first president to hail from the Muslim Brotherhood. And it also has Mahmoud, 50, whose profile is so ordinary by contemporary Egyptian standards as to make her elevation extraordinary.

With her image as a traditionalist everywoman, Mahmoud symbolizes the dividing line in the culture war that has made unity an elusive goal since the ouster of Hosni Mubarak. For some, she represents the democratic change that the revolution promised. But to some in the westernized elite, she stands for a backwardness and provincialism that they fear from the Islamists of the Muslim Brotherhood.

"I can't call her a first lady under any circumstances," said Ahmed Salah, 29, a banker. "She can't be an image for the 'ladies' of Egypt."

Her image has become the subject of a rancorous debate on websites and in newspapers. A column in the newspaper El Fagr asked: How could she receive world leaders and still adhere to her traditional Islamic standards of modesty?

What Morsi Means for Women, Israel and the U.S

For the first time in Egypt's existence, Mohammed Morsi has become not only the country's first freely elected president, but also the first Islamic head of state in an Arab country.

It's a joyous moment as Egyptians take to the streets to celebrate, but the work to restore democracy is far from over as a tug-of-war for power has just begun between the newly elected president and Egypt's ruling military.

Even though Morsi is president, the Egyptian military still holds all meaningful power including wanting a say in how Egypt's next constitution is written.

But as the situation remains fluid, issues like the treatment of women will serve as a barometer for success. Morsi has promised equal rights for all women, even announcing that he will be selecting a woman as his vice president.

According to Momtaz Khaan, a Board Member of the Muslim Canadian Congress, the Canadian Islamic landscape is changing in the country from one of borderline extremism to modernity, conformity and acceptance.

(Ahlul Bayt News Agency) - We have interviewed Momtaz Khaan, a Board Member of the Muslim Canadian Congress to further discuss the issue.

The following is a rough transcription of the interview.

Q. Can you tell us in a few words what the mandate of the Muslim Canadian Congress is? What does it stand for and what does it hope to achieve?

A. In a brief mandated-nutshell, we are a grassroot organization aimed at bettering Islam, its image and helping bridge the gap of misunderstanding between the Muslim community in the country with the wider one. Islam, as we all know, is a religion with peace at its essence filled with chapters explaining to the world how to cohabitate with everyone in harmony.

We hope to bring this message to the rest of the world in a time when the religion is in the spotlight for all the wrong reasons. Muslims are as much a part of the social fabric as any other group, demographic or even ethnicity that comprises this nation.

Q. Your group’s article regarding "The Canadian Islamic Landscape” recently came in the newspaper. Can you describe it in more detail?

A. As I said in the description, the perception of Islam following the attacks on New York City on September 11th was marred in an almost permanent manner. Following that event, people discredited any sort of endeavor undertaken by Muslim groups to help change that image. Unfortunately, the response was a little negative as society wasn’t very responsive or accepting of these efforts.

SRINAGAR: The body of a young lady doctor with her throat slit was recovered here, while a 13-year-old girl allegedly committed suicide by hanging herself in Shopian district, police said.

The 26-year-old doctor posted at Handwara sub-district hospital was found dead inside the bathroom of her house at Iqbal colony near Shaliteng this afternoon, Station House Officer of Parimpora Police Station Inspector Mohiuddin told PTI.

He said preliminary investigations suggested that the doctor had apparently committed suicide by cutting her throat with a sharp edged weapon.

"She was reportedly perturbed after her engagement was broken recently. We are further investigating the case", the officer said, adding, the doctor was alone in her home when she took the extreme step.

In another incident, a 13-year-old girl hanged herself at her Shopian residence in south Kashmir, a police spokesman said.

The girl was found by her relatives hanging inside a room and was rushed to Shopian district hospital where she breathed her last, the spokesman said.

The motive behind the suicide was not known immediately.

KARACHI: Sharmeen Obaid-Chinoy, Pakistan’s first Oscar-winning documentary filmmaker was mired in controversy when one of the victims whose narrative was recorded in her documentary “Saving Face,” accused Chinoy of not fulfilling her commitment of providing financial compensation.

Rukhsana, who hails from Muqzaffargarh, filed a case against Chinoy in the Multan sessions court. She claimed that Chinoy offered her compensation and benefits which motivated her to appear in the film, but once the documentary was released, the director did not fulfil her commitment.

She alleged that Chinoy promised her a five-Marla (126 square-metre) house, Rs3,000,000 and plastic surgery in compensation for her role in the film. Rukhsana also claimed to have been thrown out of her house for working in the movie and is forced to live a nomadic life with her children.

Chinoy, however, denies all the allegations and spoke out against Rukhsana’s claims on social media website Twitter.

ISLAMABAD: Leading from the front, like the previous years, the girls shone again by bagging two of the top three positions in this year’s Federal Board of Intermediate and Secondary Education’s (FBISE’s) Secondary School Certificate (SSC) Part-II annual examination. The results were announced on Thursday. The exam pass rate remained at 81.34 percent.

A total of 64,676 students appeared in the examination held in March, April and 52,326 have been declared as pass while 11,980 were declared fail. Some 349 more did not appear in the examination. Federal Minister of Technical Education Sheikh Waqas Akram along with FBISE Chairperson Dr Shaheen Khan inaugurated the SSC Part II results.

In Science Group, Arooj Mustafa of Jinnah Education System, Taxila, stood first. She secured 1,024 marks out of a total of 1,050. Moeez Rehman of Islamabad Model College for Boys G10/4 came second by securing 1,022 marks while Sana Shahid of Garrison Academy for Girls, Lahore got third position with 1,020 marks.

HAIFA, Israel — Estee Lieber was in a bit of a tizzy as she emerged from under the blow-dryer for the final walk-through on Thursday evening. “I don’t like it straight,” she complained, wearing a triple strand of pearls and her sash, while waiting to put on her velvety black dress slit up the side. “I’m not modern. In my eyes it’s not beautiful.”

This was the first beauty pageant for Ms. Lieber, 74, who was born in Poland in 1937, was 5 when her father was killed by the Nazis in Germany, and 6 when her mother faced the same fate. It was the first time down the runway for all 14 finalists, in what was billed as the first-ever pageant of Holocaust survivors.

They wore sensible shoes, and no swimsuits. Personal stories counted as much as poise.

“I had a long struggle against death, I almost died in the concentration camp,” Mania Herman, 79, told the audience of about 500. “I came to Israel in 1951. I studied, I worked, I made a family. I wrote three books about the Holocaust.”

But this pageant was of greater consequence than to serve up a feel-good moment. It tapped into a core conflict that bedevils this society, where most everyone agrees on the need to keep the memory of the Holocaust central and alive, but not everyone agrees on how.

Some criticized the celebration for trivializing a tragedy, a reminder that in Israel the Holocaust is both omnipresent and ever-contentious.