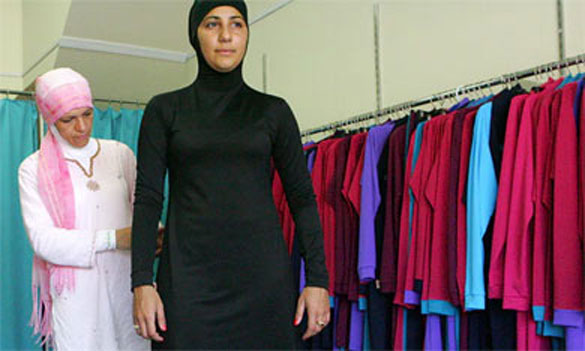 •  Muslim Women Say They Were Harassed In West Rogers Park

London (dpa) - Muslim women are the most disadvantaged group in Britain‘s job market, facing a "triple penalty" because of their gender, race and religion, lawmakers said on Thursday.

Experts told the lawmakers that "the most significant of these penalties was religion" in causing greater inequality in employment for Muslim women than other groups, a parliamentary Women and Equalities Committee reported.

About 65 per cent of Muslim women are economically inactive, double the general rate for women in Britain, the report said, adding that the reasons for the gap are "varied and complex."

"They include: discrimination and Islamophobia, stereotyping, pressure from traditional families, a lack of tailored advice around higher education choices, and insufficient role models across education and employment," according to the report.

Maria Miller, the chair of the committee, said the lawmakers "heard evidence that stereotypical views of Muslim women can act as a barrier to work."

"The data suggests that in communities these patterns are shifting across generations, but we remain concerned that this shift is happening too slowly and that not all Muslim women are being treated equally," Miller said in a statement.

Miller said some Muslims were reluctant to speak to the lawmakers because they feared their inquiry could be part of the government‘s counter-extremism programme, which was "cited as a significant source of tension" by several witnesses.

CANNES, France — The mayor of Cannes has banned the wearing of Burqinis — full-body swimsuits — on the beaches of the French Riviera resort famous for its annual film festival, officials said Thursday.

Mayor David Lisnard signed off on the ruling that “access to beaches and for swimming is banned to anyone who does not have (bathing apparel) which respects good customs and secularism,” which is a founding principle of the French republic.

“Beachwear which ostentatiously displays religious affiliation, when France and places of worship are currently the target of terrorist attacks, is liable to create risks of disrupting public order which it is necessary to prevent,” it says.

Thierry Migoule, head of municipal services for the town, sought to clarify the ruling’s intent.

“We are not talking about banning the wearing of religious symbols on the beach… but ostentatious clothing which refers to an allegiance to terrorist movements which are at war with us,” he said.

On July 14 the nearby Riviera city of Nice was the target of an attack claimed by the so-called Islamic State group which killed 85 people, when a truck plowed into seafront crowds celebrating the French national holiday.

On July 26 a priest was killed in his church in northwestern France by two attackers who had proclaimed their allegiance to Islamic State.

Islamic dress is a hot-button issue in France, where the full-face veil is banned in public places. But there is no ban on wearing religious symbols or clothing.

Migoule said that no burqini had been seen on any beach in Cannes since the ruling was signed into force on July 28 by Lisnard, a member of the center-right Les Republicains party.

Earlier this week, a waterpark in nearby Marseille cancelled plans to host a private event for Muslim women wearing burqinis after they sparked outrage, including from politicians on both the right and left.

MUSLIM WOMEN SAY THEY WERE HARASSED IN WEST ROGERS PARK

Suzanne Damra said a woman targeted her and her mother because they are Muslim and wearing hijabs. They said the woman yelled, spit, and harassed them while they were walking to Damra's car around 6:15 a.m.

Once inside their car, Damra started recording on her phone. The video provided by Damra shows a woman trying to open both car doors on the passenger's side, and then tugging at the side mirror.

While Damra and her mother screamed at the attacker, the woman can be heard on the video yelling: "**** you, ISIS! **** you, ISIS!"

Damra said the woman has been harassing and calling her names for about a month, but she said she didn't think anything of it until it turned physical.

"To Donald Trump is to leave the Muslim people in America alone, leave us alone," Zahdan said.

Both women decided to speak out Thursday because they're worried other Muslims might be attacked as well. They hope citizens will step forward when seeing harassment first-hand.

At this point, no arrests have been made. Chicago Police said they are investigating this alleged crime as a simple assault.

The Chicago police pulled off her religious garb, arrested her and later strip-searched her.

A Muslim woman is suing the city of Chicago and six officers who falsely singled her out as a potential terrorist on July 4, 2015, as she left a subway station wearing a headscarf, face veil and carrying a backpack.

Itemid Al-Matar's federal lawsuit filed on Friday says officers pulled off her religious garb, arrested her and later strip-searched her. The 32-year-old was acquitted of obstructing justice. The Council on American-Islamic Relations says "blatant xenophobia, Islamophobia and racial profiling" motivated the arrest.

A public police report says officers "were on high alert of terrorist activity" on the national holiday and that Al-Matar was exhibiting "suspicious behaviour." The CPD declined to comment but said in a statement that police "strive to treat all individuals with the highest levels of dignity of respect."

Kadiza Sultana was one of the three schoolgirls who left London join ISIS. She was believed to have been killed by a Russian air strike.

One of three schoolgirls who left London in February 2015 to join the Islamic State militant group has died, her family lawyer told Reuters on Thursday.

Attorney Tasnime Akunjee said the family of Kadiza Sultana learned of her death in Raqqa, Syria, a few weeks ago.

She was believed to have been killed by a Russian air strike in Raqqa, ITV News reported earlier on Thursday.

Sultana was making plans to return to Britain and her family was communicating with her to discuss her possible escape from Raqqa, according to an interview published by ITV with Sultana's sister, which includes recordings of purported phone calls between the sisters.

The British Home Office and British Interior Ministry could not be reached immediately for a comment.