• From Aladdin to Ms. Marvel, The Significance of Iranian and Pakistani Women Representation 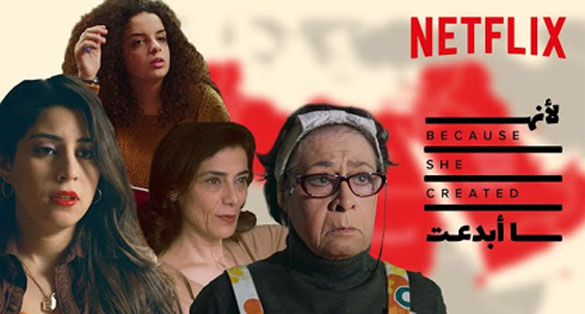 “While these stories are distinctly and authentically Arab, the themes will resonate with women across the world, uniting women from all walks of life through beautiful and poignant series and film,” explained the world leading streaming platform in a press release.

Netflix launched the Because She Created platform last year as a virtual panel discussion hosting Arab women filmmakers to talk about the evolving role of women in the Arab film industry, hosting a talk by Hend Sabry at last Cairo International Film Festival.

All the films, which are new on Netflix, have been available worldwide since Thursday. 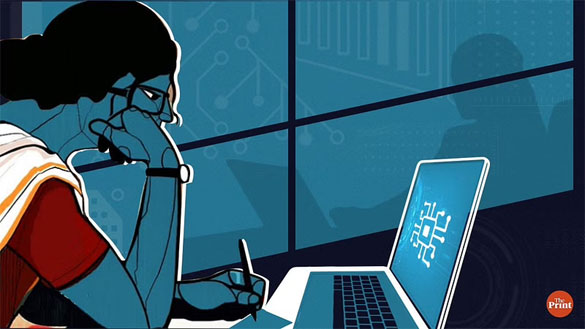 New Delhi: It’s generally assumed that economic development and women’s participation in the labour force go hand in hand. However, a World Bank study has found that the relationship is more complex in South Asia — particularly in India — than previously thought.

Published in April this year in the World Bank’s South Asia Economic Focus, Spring 2022, the study, titled ‘Reshaping Norms: a New Way Forward’, found that economic development corresponded with a rise in women’s participation in the workforce in some South Asian countries like Pakistan and Bangladesh, but only up to a point in India.

The study took into consideration Gross Domestic Product (GDP) based on purchasing power parity (PPP) from 1985 to 2019. PPP is the rate at which one country’s currency would have to be converted into another’s to buy the same amount of goods and services.

It found that female labour force participation (FLFP) — the percentage of women currently employed or unemployed actively looking for work — varies from country to country in South Asia. The study also found that in India, FLFP fell after per capita income surpassed $3,500.

The South Asian countries included in this particular analysis of the study were India, Sri Lanka, Bangladesh, Bhutan, Nepal, Pakistan, and the Maldives.

“India saw a weak but positive relationship between FLFP and GDP per capita growth at levels of development roughly below US$3,500 per capita and declines beyond this point,” the report said.

The study also notes that in South Asian countries, there was no positive correlation between an increase in female education levels and a decline in fertility levels on the one hand, and women’s participation in the labour force on the other hand. (Positive correlation means when one metric increases, the other also increases in a similar proportion.)

However, while the report cites trends in India’s FLFP with respect to economic growth, it gives no clear reason for these. Maurizio Bussolo, lead economist at the World Bank’s South Asia office and lead author of the study’s chapter on gender, told ThePrint in an email that India’s conservative social norms could explain at least a part of the phenomenon.

“[In our report] We highlight that the potential failure of economic growth to bring increases in FLFP may be linked to restrictive social norms that act as barriers to women’s engagement in the labour market,” Bussolo said.

“Female employment only rises when earnings are sufficiently high [in order] to compensate for the loss of male honour,” she told ThePrint. “Given jobless growth, female employment remains low.”

The study says that there’s generally a U-shaped relationship between per capita incomes (measured in terms of PPP) and FLFP. That is, as economic development occurs or as per capita incomes rise from lower levels, women’s participation in the labour force declines up to a point and rises thereafter.

The study claims that when a country is largely agrarian, women’s participation in agriculture and allied activities is higher. However, as a country industrialises and as the need to have more working hands go down, this participation declines, largely due to societal biases against women working in manufacturing units.

The curve rises again at higher-income levels as a result of growth in the service sector coupled with higher education levels among women and a lower fertility rate (that is, the number of children born alive to women of that age during the year as a proportion of the average annual population of women of the same age).

The study, however, shows that the growth trajectory isn’t uniform across South Asian countries. For instance, in Sri Lanka and Nepal, the FLFP has barely changed despite economic development. In Bangladesh, Bhutan, Pakistan, and the Maldives, a rise in per capita income corresponds with a rise in FLFP. India, too, saw a similar corresponding rise but only until it reached a per capita income of $3,500, the study shows.

Evans told ThePrint that although both Bangladesh and Pakistan have low female employment, “an additional constraint in India may be labour regulation, which suppresses job-creation in the formal economy”.

“It traps families in precarity, reinforces reliance on kinship, and encourages jati-endogamy (the custom of marrying within one’s caste),” she told ThePrint via email. “Moreover, employers frequently subcontract to home-based workers in order to artificially reduce the size of their firm and circumvent labour regulations. This kind of informal ‘gig’ work keeps many women trapped by family surveillance and control.”

The study also observes while almost all developing countries show a positive correlation between female education and FLFP that is “almost causal”, South Asia doesn’t exhibit this trend.

“In South Asia, however, primary and secondary school enrolment rates have improved dramatically over time and have either converged or gotten very close to the levels in more developed regions, without commensurate improvements in FLFP”, the report said

It made similar observations for declining fertility rates that have been driven by improvements in female education, increases in the age of marriage, and declines in child mortality rates.

“In general, a decline in fertility tends to raise FLFP, as the opportunity cost of women’s time falls. However, most countries in South Asia have experienced a significant reduction in the number of children that an average woman has in her lifetime, with fertility rates now around the replacement level,” the report said.

Bussolo told ThePrint that the effect of conservative social norms in India was so strong that at the current level of its per capita income, India’s female labour participation at work should have been higher.

“Indeed, using data for India and other countries, we show two things. First, attitudes (a proxy for social norms) towards gender roles have not improved in the last decades, and a growing majority of people in countries like India believe that ‘men have more rights to jobs than women’,” he said

“Second, we show that, when it is possible to measure them, conservative social norms account for a significant share of the FLFP deficit, i.e. for the fact that, at its level of development, India should have a higher FLFP rate,” he added.

From Aladdin to Ms. Marvel, The Significance of Iranian and Pakistani Women Representation

Disney has misrepresented many cultures and stories during its tenure. Though none so much as Iranian and Pakistani representation. ThoughtCo. details common stereotypes that clump together Central Asian and Middle Eastern cultures under the umbrella of ‘Arab’. A common stereotype is that they are terrorists or barbaric. In the animated version of Aladdin, many of these harmful depictions run rampant. Yet, as Disney set to make amends with their problematic past, the live-action rendition of Aladdin and the MCU Disney+ series, Ms. Marvel depict Iranian and Pakistani people in a more positive light.

A positive depiction of Iranian women is through Princess Jasmine, particularly in the shift in the clothing she wears in the live-action film. A second way Jasmine is significant in the depiction of Iranian women is how she advocates for herself and her people. Iran’s neighbor to the southwest, Pakistan, is marvelously depicted in Ms. Marvel. Kamala Khan and her family are depicted as joyful people who want to celebrate her brother’s wedding. Of course, the most important part of Ms. Marvel is how the series tackles the terrorist stereotype head on.

When Aladdin premiered in the early 1990s, it was remarkable for little Iranian and Arab girls to see a tan woman with dark hair on the screen being represented as outspoken and fierce like tigers. Yet, the difference between her outfit and the concubines in the film is a thin facial veil on the concubines. When Disney announced the live-action remake, they had actors from across the Middle East and Central Asia like Nasim Pedrad, who is from Iran, and Mena Massoud who is Egyptian. A natural progression was the fashion in the film, particularly Jasmine’s. Cheetah-Adventures breaks down street fashion in Iran and two aspects of Iranian fashion can be found in Aladdin. First, Iranian fashion, and other forms of art, play with color rather brilliantly. Most of Jasmine’s outfits have vibrant colorings and lots of gold and jewels — she is a princess, after all. Another classic element of Iranian fashion is for women to wear a manteau, or a body veil, which can be opened or closed that overlays pants or a skirt and a top. Jasmine wears a magenta closed manteau over teal pants, a nod to the original mint green outfit from the animated classic, when she meets with Prince Anders.

As intricate and beautiful as the Iranian-inspired fashion is in director Guy Ritchie’s Aladdin, one aspect of the story overshadows the fashion: the patriarchy. The film does not exaggerate Jafar telling Jasmine to be silent and let the men lead. While Iranian women led the Iranian Revolution in the early 1980s, the changes have been minimal over the past 40 years. Iranian law uses population planning as their excuse to make decisions over women’s bodies. Women have the capacity to be political powerhouses as exemplified by Jasmine becoming Sultan. Jasmine reminds the audience that the power of “no” can become overwhelming when the laws attempt to orchestrate your every move, but that doesn’t stop her. One massive difference between animated and live-action Jasmine is that she doesn’t just want to escape the palace walls, she wants to bulldoze the entire system because her people are suffering. That’s why Jasmine is a feminist icon and an empowering woman Disney character. Her position as Sultan shows the audience that despite outdated laws and beliefs, an individual is more than their labels.