The first woman filmmaker in the United Arab Emirates, Nayla Al Khaja is teaming with Oscar-winning music composer AR Rahman for her upcoming feature film Baab. The film is written by Al Khaja and Masoud Amralla Al Ali. As per Variety’s report, Baab follows the story of Wahida, who is unable to make sense of her twin sister's mysterious death and is plagued by a haunting rhythm in her ears. She discovers hidden cassette tapes and her relentless pursuit of the truth begins to untangle unresolved grief taking her deep into the mountains to delve into the complexities of the human soul.

Speaking about the film, AR Rahman told Variety, “I'm delighted to be working with Nayla on her feature film Baab, she's a passionate and promising filmmaker and an important creative voice within the Gulf region. The script is enigmatic, thought-provoking and promises to be both visually and emotionally engaging for universal audiences. I'm looking forward to the journey."

Meanwhile, filmmaker Nayla Al Khaja said, "My grandmother came from the mountains, they have never been captured in a feature before, the sheer access to the indigenous people of Ras Al Khaimah and the soulful script is an untold story that I am eager to tell. With A.R. Rahman on board, we will live a very immersive journey that is authentic, haunting and real.” Al Khaja is known for her shorts such as Malal and The Road to Fulfilment. She is making her feature debut with Three, which is scheduled to go into production later this year.

The team will begin shooting in March 2023 in the northern Emirate of Ras Al Khaimah, which will provide the film's backdrop of dramatic vistas of the Jais mountains.

Rahman recently set up the Firdaus Studio as part of Expo 2020 Dubai and mentored the Firdaus Orchestra, an all-woman ensemble of 50 musicians from 23 Arab countries. 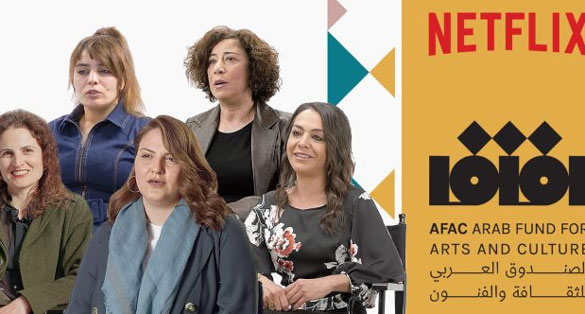 JEDDAH — In cooperation with the Arab Fund for Culture and Arts (AFAC), Netflix announced the names of the five Arab directors and producers who received a one-time cash grant to support their films.

Launched in 2021, the Netflix Fund for Creative Equity aims to create more opportunities for talents in underrepresented communities within the entertainment sector and to bridge the skills gap by providing training programs.

In the Arab world, the Fund offers a grant of up to $250,000 aiming to provide financial support to Arab women directors.

Nuha El-Tayeb, Director of Content Acquisition for the Middle East and Turkey at Netflix, said: “The Arab world has a long-standing history of women in entertainment, and we’ve had incredible successes and firsts from the region that we’re all very proud of. But in order to give more people a chance to see their lives reflected on screen, we need more women behind and in front of the camera. The Fund for Creative Equity helps the industry as a whole to have a much more dynamic, interesting, multidimensional representation of women and this is one step in the journey to enabling more women to tell their stories and have new audiences discover their work.”

AFAC offers annually two grant programs to support filmmakers in the fields of documentaries and feature films. Netflix selected five women AFAC grantees for the year 2021 to receive support for their individual projects.

Rima Mismar, Executive Director of AFAC, stated: "More and more Arab women filmmakers are creating moving images that have the power to shed light on the realities of the region. This second collaboration with Neftlix, this time to support women in the field of cinema, complements perfectly AFAC's mission to promote diversity of voices and narratives.”

The film "White Lie" by Moroccan director and producer Asmae El Moudir was selected in the non-fiction category. While Lebanese producers Diala Kachmar (From the Other Shore), Jana Wehbe (The Day Vladimir Died) and Tania Khoury (Manity) presented three exceptional novels. Also, Tunisian director and producer Sarra Abidiwill now have the opportunity to present her novel (My Name is Clara) on screen.

Over the years, Netflix has been keen to obtain exceptional business licenses for women creators and steadily working more with Arab storytellers to highlight their experiences.

Investing in the Netflix Fund for Creative Equity is another way to amplify the voice of women while bringing fresh and original content to audiences across the region.

RIYADH — Saudi Arabia will participate in the third Gulf Games hosted by Kuwait on May 22 with more than 250 male and female players in 17 different games.

First arrivals to Kuwait, the women's futsal team arrived on Wednesday to launch their participation in the tournament against the Bahraini national team at 5:00 p.m. next Sunday.

It is noteworthy that Saudi Arabia topped the general rankings of the Dammam games in 2015 with 115 medals, 57 of which were gold, 35 silver and 23 bronze, the UAE came second with a total of 73 various medals, Qatar was third with 59 medals, Bahrain fourth with 43 medals, and Oman fifth with 29 medals.

In the 2011 Manama Games, Kuwait topped the rankings with 41 medals, Qatar came second with 27 medals, Bahrain was third with 23 medals, the UAE fourth with 26 medals, Saudi Arabia fifth with 32 medals, and Oman sixth with 14 medals.

She defeated Indian archer Bhajan Kaur 6-2 in the final match of women’s recurve.

Khargone (Madhya Pradesh): Scores of Muslim women from different localities in the town rushed to Khargone superintendent of police office and submitted a memorandum demanding justice to their kin who were arrested in connection with the riots erupted on April 10.

Muslim women took to the streets and reached the SP office raising slogans where they met ASP Neeraj Chaurasia. They accused local police of taking one-sided action against their kin and arrested them without proper identification.

According to reports, police so far arrested 182 people in 72 FIRs registered after violence reported in the town following the stone pelting incident that occurred during the Ram Navami procession.

One of the women, Ujma Sheikh claimed that police arrested children aged 10 to 12 years during night without identification. Not only kids but also arrested many of the senior citizens. Cops misbehaved with the women as well, she claimed

Meanwhile, ASP Neeraj Chaurasia rubbished all the allegations levelled on the cops and said that police did not arrest anyone without proper identification. If anyone found innocent who was picked up by the police then he would be released.

Khargone Kotwali police arrested the accused brandishing a sword on the superintendent of police Siddharth Choudhary during Ram Navami clashes erupted on April 10. The accused has been identified as Irfan. SP Choudhary who assumed charge on Wednesday confirmed Irfan's arrest.

Irfan had an allegation of attacking people with a sword during the Khargone violence and arson in Sanjay Nagar area.He was also produced before the court.

RIYADH: California-based women-centric training platform for MENA computer science engineers, Manara, raised $3 million in a pre-seed funding round that was led by Stripe.

Founded in 2021 by Iliana Montauk and Laila Abudahi, the company offers computer science training to anyone who is qualified for it without paying any tuition fees but committing to 10 percent of their salary in the first two years of employment.

The startup will use its funds to launch self-service products for interview practice, networking, and mentorship as well as grow from 60 to 6,000 engineers per year, according to TechCrunch.

The company has seen 86 percent of its trained engineers receiving job offers in just five months of graduating with others seeing a 300 percent increase in pay after training.