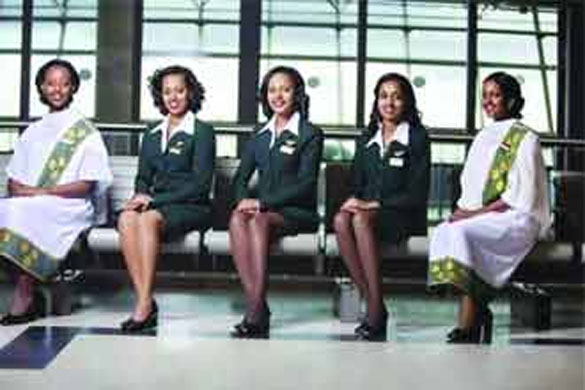 Photo: Ethiopian Airlines, the leading, fastest growing and most profitable airline in Africa, operated an all-women functioned flight on November on the Addis Ababa–Bangkok route.

•  Afghanistan celebrates the graduation of 470 policewomen

•  ‘The Tainted Veil’: Muslim Women Confront the Power and Legacy of the Hijab

95% Saudi women got AIDS from their hubbies

JEDDAH — About 80 Saudi women were diagnosed with AIDS in 2014, Sanaa Filimban, AIDS program director in the Ministry of Health, has said. “It was a shock to many women. Most of them did not ever leave the Kingdom and 95 percent of the patients contracted the disease from their husbands through sex,” he said.

The ministry participated in the International AIDS Day, celebrated every year on Dec. 1, by raising awareness of the disease through workshops and lectures.

Filimban said the ministry has set up 48 centers for AIDs checkups and consultancy in the Kingdom. Out of them, 36 will be stationary and 12 mobile, he said.

She added that confidentiality of the patients is paramount in AIDs centers.

“We deal with the women by giving them numbers. We don’t call them nor record their names to protect their privacy. Only their doctor knows their names for administrative reasons,” said Filimban. She added there are 21,761 AIDs patients in the Kingdom.

She also said the Kingdom recorded its first AIDs patient in 1984. “Statistics show that 3 percent of the recorded patients are children and the rate of contracting AIDs through breastfeeding from an infected mother is also 3 percent. There is one Saudi woman with AIDs for every four Saudi men with AIDs. Saudi patients aged 15 to 49 constitute 81 percent of the total number,” said Filimban.

She added only 2 percent of the patients contracted the disease by taking drugs through syringes.

“AIDs is usually transferred through men and women during unprotected sex. In developing countries where most people have protected sex, homosexual sex is the most common way of contracting the disease,” said Filimban.

She added there are other ways of contracting the disease mainly by using infected equipment such toothbrushes, razors, tattoo tools. Patients can also contract the disease by going through an organ implant surgery in which the organ implanted was infected with AIDs.

Meanwhile, Prof. Tawfiq Bin Ahmed Khoja, director general of the Executive Board of GCC Health Ministers, said the rate of HIV cases among GCC citizens ranges between 0.15 and 1.95 for every 100,000 people. “This is the lowest rate in the Arab region,” he pointed out.

Khoja said the number of HIV cases among GCC citizens increased in recent years as a result of unhealthy lifestyle followed by some groups of people and lack of knowledge about the dangerous impact of the disease.

“Increasing foreign travel, important social transformations in major cities, rising use of drugs through injection and presence of a large number of expatriates from different countries are other reasons for the growing HIV cases in the GCC,” he added.

Khoja said health ministries in the member countries have taken a series of measures to contain the contagious disease, including stoppage of blood import, increasing public awareness through the spread of moral and religious values and explaining methods to protect against the virus. “We also provide HIV-positive patients mental and social care,” Khoja said.

Ethiopian Airlines, the leading, fastest growing and most profitable airline in Africa, operated an all-women functioned flight on November on the Addis Ababa–Bangkok route.

This historic flight was aimed at crystalizing Ethiopian corporate conviction of “Women Empowesrment for a Sustainable Growth,” and it was the first of its kind in the airlines’ 70 years of service.

This historical flight was operated by an all female crew led by female flight deck crewmembers and senior female executives onboard that flight. On ground, flight preparations were also conducted by females only, such as a cabin operations, airport operations, flight dispatcher, load controller, ramp operations, onboard logistics, aviation safety and security, ticket offices, catering, air traffic controllers as well as Global Call Center.

Ethiopian Airlines Group Chief Executive Officer Tewolde Gebre Mariam remarked: “It is a great honor for us to have competent women aviation professionals at Ethiopian Airlines in every aspect of the aviation field, which the airlines as gender responsive organization strives to pursue its underlying stance of being an equal opportunity employer. We are very proud of their achievement and contributions and it is our sincere belief that this will continue with an enhanced magnitude and passion to sustain Ethiopian Airlines on its first growth trajectory.”

“Above all, this is an ample opportunity to inspire young African female students to believe in their dreams and embark to fill the skill gap for avian professionals. Women are the continent’s greatest untapped resources, and hereby fully dedicated to ensure the increase number of women in decision making positions on top of key operational areas by consistently grooming and mentoring successor female employees for top managerial, technical and operational positions. We are happy that the world watched our all-female operate long haul flight to and from Bangkok,” he added.

Ethiopian Airlines is the fastest growing airline in Africa. In its close to seven decades of operations, it has become one of the continent’s leading carriers, unrivalled in efficiency and operational success.

It commands the lion share of the pan-African passenger and cargo network operating the youngest and most modern fleet to more than 90 international destination across the five continents. Ethiopian Airlines fleet includes ultra-modern and environmentally friendly aircraft such as the Boeing 787, Boeing 777-300ER, Boeing 777-200LR, Boeing 777-200 Freighter, Bombardier Q-400 double cabin with an average fleet of five years. In fact, it is the first airline in Africa to own and operate these aircraft.

Afghanistan celebrates the graduation of 470 policewomen

Afghan policewomen graduation file photoAmid efforts to increase the number of female service members and officers with the Afghan National Police (ANP), the Ministry of Interior (MoI) on Sunday celebrated the graduation of at least 470 policewomen in Kabul.

The graduation ceremony was attended by Minister of Interior Noor-ul-Haq Ulomi, Turkish ambassador to Afghanistan and a number of other high level government officials.

Minister Ulomi said the newly graduated policewomen will bear enormous responsibilities as Afghanistan is facing an undeclared war with the enemies of the country continuously trying to create more problems.

He also added that the enemies of the country are looking to take the lives of ordinary civilians by creating conspiracies.

Ulomi said the newly graduated policewomen joining the police ranks is considered as a special breakthrough as the women are still facing problems in different parts of the country to freely work outside their homes.

This comes as the Ministry of Interior (MoI) officials said last year that the ministry is looking to expand the presence of female officers among the Afghan National Police (ANP) forces.

The officials further added that necessary steps will be taken to ensure better working environment for the women to serve with the police forces.

Female police officers are currently engaged in various types of activities, including search operations in the main entry gates of the city.

‘The Tainted Veil’: Muslim Women Confront the Power and Legacy of the Hijab

Forget the misinformed pundits on TV. In a new documentary, Muslim women explain their faith and why they wear the hijab.

The Tainted Veil—a new documentary on the practice of veiling in Islam—is certainly not trying to set the world on fire. But it does present a multifaceted and refreshingly unresolved look at the hijab at a moment when the nature of everyday life for Muslim people in America is being scrutinized more than ever before.

As pundits who have little actual understanding or experience with Islam politicize the religion, films like The Tainted Veil offer an important opportunity to listen to those whose voices are not often heard in the partisan and profit-oriented media—namely the voices of Muslim people. Even better, dealing specifically with the issue of the hijab gives The Tainted Veil reason to speak to many Muslim women, whose voices are even more often ignored than men's.

It would be an easy criticism to say that this documentary positions its audience as the arbiters on the case of the hijab, and that in doing so The Tainted Veil favors the mindset of Westerners, many of whom believe themselves superior to Muslim women who are veiled. But The Tainted Veil anticipates that criticism and includes the perspectives of both non-Muslims who take issue with the tradition and Western and non-Western Muslim women who wear the hijab. As a result, would be hard to walk away from The Tainted Veil with a unilateral view of the contentious garment, and that is a welcome accomplishment.

Frankly, in the context of documentary filmmaking, it’s refreshing just to get to see so many multifaceted women speak at length about their ideas and identities. The filmmaking team, comprised of co-directors Nahla Al Fahad, Mazn al Khayrat, and Ovidio Salazar, talk to women of all ages and of many nationalities about their experiences with the veil, and to their credit, they find something unique in every subject, even when those subjects are presented without introduction.

For some, the choice to go veiled is born of a desire to feel close to Allah. For others, the hijab merely signals to the world how they’d like to be treated, and serves as a protective armor for the objectification that women face from men. In the film, there are non-Arab women who discuss their choice to wear the hijab, and likewise there are Arab women who discuss their choice not to wear it. For the European subjects of the film, the hijab is a marker of difference, and they talk about their feelings of alienation in the face of ignorance. For each woman the decision seems purposeful and personal, and often they present their own unique perspective on the hijab and its relationship to their particular culture.

The film does not exclude men, but where the women included for the most part are ordinary people with pursuits beyond their religion, the men who are interviewed seem chosen for their specific and varying relationships to Islam. There’s the Arab artist who refuses to paint women wearing the veil because he believes the image necessarily symbolizes oppression. There’s a cleric who advocates for the niqab. And a professor who views the history of the world’s three major monotheistic religions—Christianity, Judaism, and Islam—as a form of authoritarianism, especially against women.

Including as many perspectives as the film does, there are moments when contributors’ comments begin to contradict each other.

One moment of speciousness that stood out to me was the assertion made by one of the participants that it was the norm in the West for women to cover their heads when in public until the 1950s, a claim supported in the film by references to paintings and to photographs. This claim could just as easily be debunked with a different selection of images showing Western women who historically did not cover themselves. Likewise, another professor perhaps oversimplifies by arguing that most women do not separate their religion from the imperfect culture surrounding it.

These moments of doubt don’t discredit the film, as the diversity of informed perspectives succeeds in making every subject feel like an individual and not like a mouthpiece. As ideological disagreements become increasingly central in our ever-shrinking world, maintaining our sense of each other’s individuality is of no small importance. It might seem elementary, but as The Tainted Veil shows, religious garments are not an excuse to assume you know everything about a person.