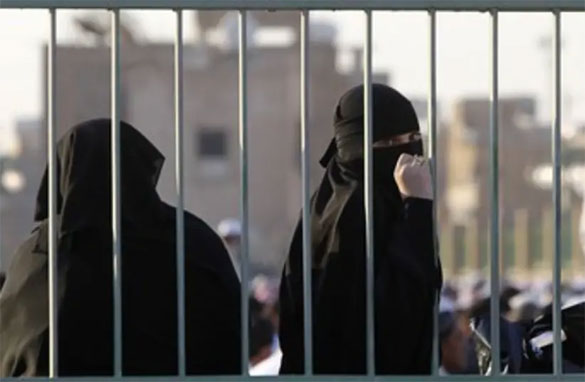 •  Pakistan: Will laws force Nuzhat away from her family?

In Saudi Arabia, women can go to law school, work in law firms and meet with clients. But they cannot open their own law offices, represent male clients or argue cases directly. All that is set to change as the government has passed new laws allowing women to work in the legal profession on the same footing as men, taking effect next month.

“It’s a great step forward, for sure. We didn’t believe it would happen so quickly,” Shihanna Al-Azaz, 26, a British-educated lawyer working for an international law firm in Riyadh told The Media Line.

“We thought there would be a lot of restrictions on us, saying we could only deal with family law, but we are very pleased to see this provides women with equal opportunity.”

Al-Azaz says it is still not clear exactly when the new law will take effect, or what it will mean.

“I’ve seen drafts of letters from officials being circulated, but we haven’t yet seen the final version,” she said. “And it depends on when the Council of Ministers meets to ratify the new decrees.”

Around 60 percent of women in Saudi Arabia have university degrees, but they make up only 15 percent of the workforce. Women who do work outside the home are subject to restrictions. Saudi Arabia is only country where women are not allowed to drive. They also need written permission from a male guardian to work or travel. Women also must wear Islamic dress and have their heads covered outside their homes.

Yet young women like Al-Azaz, many of whom go abroad to study, are challenging the traditional gender separation in the country. She said female lawyers rarely go to file papers with government ministries, which are dominated by men. Men and women sharing office space could also be a problem.

“I’m the only woman in my Riyadh office and each lawyer has his own office,” she said. “We did open the door for a few female interns, but currently I’m the only female lawyer.”

Some women in Saudi Arabia worry that the new regulations will not go through, or will be watered down.

“We’ll have to wait and see if it’s going to happen,” Rima al-Mukhtar, an editor at the English-language Arab News told The Media Line. “There has already been a lot of criticism of the new laws, especially from a religious point of view.”

She said the current situation in which “female lawyers do all the investigations and the paperwork, but then the man appears in court” was very frustrating for women lawyers.

“Many who trained in law have left the profession, but maybe now they will come back,” she added.

Women in Saudi Arabia cannot vote either, although King Abdullah announced last year that beginning in 2015 they will be able to participate in municipal elections as both voters and candidates. Local newspapers have reported that the king will appoint 30 women to the consultative Shura Council.

“We made this decision because we refuse to marginalize women in Saudi society in their roles that comply with the Islamic Shariah and following consultations with many of our scholars who supported it,” King Abdullah said last year.

Saudi Arabia continues to practice strict gender segregation. Religious police roam the streets and can arrest unmarried men and women who are seen together. Yet women’s rights activists have grown increasingly verbal, using social media like Facebook and Twitter to gather support.

Foreign-educated women like Al-Azaz have also been active in the women’s rights movement.

“There’s always been a debate as to whether women should work in the legal field,” she said. “With any argument you put forward there are always people against it for cultural, religious and political reasons. Yet if it goes through this time, maybe women will be able to go up the ladder and even become judges.

Maryam Jameelah, a New York based Jewish woman who reverted to Islam at the age of 27, passed away in Lahore on Oct. 31. She was 78. Born as Margret Marcus in New York in a non-observant Jewish family, Maryam Jameelah developed a keen interest in religion when she was 19. She explored Judaism and other faiths and reverted to Islam in 1961. She settled in Pakistan in 1962 and never returned to the United States. She is survived by husband and five children and has over 30 books on Islamic culture to her credit. Her books include “Western Civilization condemned by itself,” “Islam and modern man,” “Islam and Modernism,” “Modern Technology and the Dehumanization of Man,” “Orientalism” and “Western Civilizations and Man,” etc. With her books, articles and review articles published in many reputed journals and magazines, she rekindled the spirit of Islamic mission in numerous young men and women.

Pakistan: Will laws force Nuzhat away from her family?

For the past 29 years, 48-year-old Pakistani housewife Nuzhat Jahan has fought for her right to live in India with her husband. Today, she has three children and two grandchildren, who reside in Turkman Gate in Delhi and are all Indian.

Recently a Delhi court convicted Jahan for being an illegal foreigner. She is now likely to be deported to Pakistan.

1,700 women given training in first aid

About 1,700 Saudi women, including government employees, have been given training in first-aid services by the Saudi Red Crescent’s Women Friends Committee during the past three years. This was disclosed by Fahda Al-Adel, chairperson of the committee. She said those trained included female employees in health and education departments.

“The training course will enhance the ability of female employees to deal with cases of injuries and accidents at work,” she said.

Dubai: Three Uzbek women were acquitted recently of human trafficking and sexually exploiting their countrywoman by compelling her into prostitution.

Citing lack of corroborated evidence, the Dubai Court of First Instance cleared the Uzbek women, 50-year-old J.J., 28-year-old J.D. and 25-year-old D.H., of sexually exploiting their 23-year-old countrywoman, Y.A., and forcing her to have sex with strangers for money.

However, presiding judge Wajdi Al Menyawi jailed J.D. and N.H. for three years each for working in prostitution.

A leading educationist and an important member of the tightly-knit Indian expatriate community in the Eastern Province is leaving the Kingdom after serving as a family and community medicine expert for 31 years at Dammam University’s College of Medicine.

Dr. Parveen Rasheed, a mother of three adult, Western-educated children, is expected to join a prestigious research institute in the United States. A native of Gwalior, she studied and taught at the famous Aligarh Muslim University before coming to Saudi Arabia in 1977.

At a series of events organized in her honor, she recalled her long and memorable association with the community and the Indian schools in Dammam and Jubail.

Sanctions by the Israel Nurses Association are set to continue on Sunday – their 14th day – but as a “show of goodwill,” Clalit Health Services’ nurses will work normally in all the health fund’s community clinics.