1.    Hijab is banned in many Muslim majority countries.

2.    Growing trend of Hijab among college students is a recent phenomenon 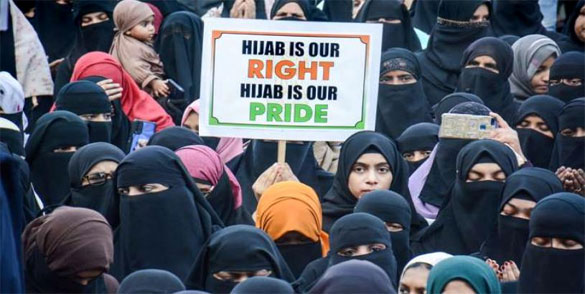 Hijab was until now a social controversy but now with the intervention of the judiciary it has become a law and order problem as FIRs were registered against girls defying Hijab ban. Both the right wings of Hindus and Muslims have fuelled the controversy which is taking an uglier turn by the day.

The trend of sporting a beard also rose among the Muslim youth during the last twenty years. Recent surveys have shown that more Muslims go to mosques for five time

However, Hijab has not been an identity issue in many Muslim majority countries. Hijab is banned in some countries while it is mandatory in some other. In Saudi Arabia the present government has left Hijab and Abaya to the discretion of women. It is not mandatory.

In India while Hijab has become an identity issue for Muslims, it is seen as a discriminatory practice by the right wing Hindus.

The Hijab row has become a matter of prestige for both communities and it is taking a toll on the education of Muslim girls. That the Islamic Shariah is not harsh on the question of Hijab is evident from the fact that in some Muslim majority countries it is either banned or not mandatory. But many extremist Ulema have over the years circulated their personal interpretation of Hijab which requires some of all the ages to cover their full body out side of their home. This interpretation is not supported by the Quran. That some girls skipped their exams preferring Hijab over exams, a Muslim lecturer resigned her job when she was asked to remove her Hijab at the gate of the college.

Mr Ram Puniyani has tried to understand the issue both from historical and multi-cultural points of view.

In India's Hijab Row, Muslim Girls' Education Trapped Between Extremists Of Both Religions

The raging controversy around the hijab is taking disturbing proportions. In Udupi, Karnataka, Muslim girls alleged that they were denied entry into the classroom if they wear hijab. Then we saw the gates of the institute being shut on the hijab-wearing girls. Also, we witnessed the despicable act of the vigilantes wearing saffron turban and shawls obstructing the lone girl Muskan and aggressively shouting ‘Jai Shri Ram’. She in turn resorted to ‘Allahu Akbar’ and went on to submit her assignment. The Muslim girls approached the Karnataka High Court, which has put a stop on saffron shawls and hijab in the schools in its interim order. 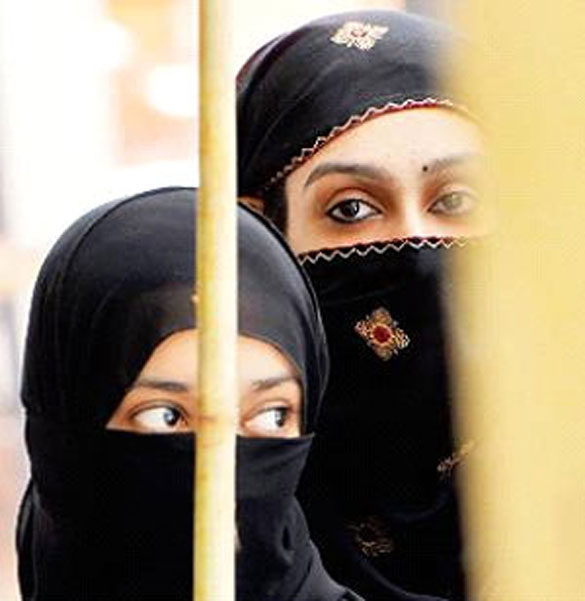 In response, many women rights groups and other rights groups have upheld the right of girls to wear hijab and harshly condemned the acts of the rightwing. Protest is on in support of the Muslim girls wearing hijab. This has also rekindled the communal atmosphere and given a handle to divisive forces. Social media is now full of derogatory comments against hijab-wearing girls/women.

This whole episode on one hand shows the forces behind aggressive vigilante groups making merry as their agenda is getting a boost. This has shown the extent to which they can go to browbeat the Muslim community. In a way those who have floated apps like Sully Deals and Bulli bai, those who are silent supporters of the sayings of the Dharam Sansads must be having a good laugh as the process of polarization is getting a boost from this episode. The statement of RSS chief Mohan Bhagwat that he does not approve of what was said at the Dharam Sansad is a mere eyewash. Indresh Kumar of RSS, who is guiding the Rashtriya Muslim Manch, criticized Muskan, saying that she has done it deliberately to disturb peace in the region.

We also have seen an atmosphere where the Namaz in public place has been opposed, the intimidating atmosphere is going to the extent that genocide expert Gregory Stanton warned that India is on the eighth position in the scale of 10 as for as genocide is concerned. This particularly in the aftermath of assertive bringing in of CAA, NRC legislations in the Northeast, whereby the possibility of disenfranchising the Muslims goes up massively. The targeting of Muslim youth in the wake of Delhi riots and anti-CAA protests is equally condemnable.

There are some points on which we have to be cautious. The Hindu right-wing gets its due provocation from Muslim communalism and extremism. Is there any role of Muslim communalists in fuelling the hijab row? We need to recall the rise of Campus Front of India, the student front of Popular Front of India, which was involved in an attack on Professor Joseph earlier. One will like to understand why the existing status quo of girls wearing hijab till the school gate and removing them in the class was disturbed? On one side the slogans are floating that hijab is our birth right, and the other that country can’t be ruled by Sharia.

Worldwide many debates have taken place around the hijab. When France banned it in public places, there were protests but France (then president Nicolas Sarkozy) persisted in his decision. As far as the latest situation is concerned many Muslim majority countries have also banned the hijab in public like Kosovo (since 2008), Azerbaijan (2010), Tunisia 1981 (partially lifted in 2011) and Turkey. In Saudi Arabia, Crown Prince Mohammad bin Salman has declared that head cover or Abaya covering full body are not a must for Muslim women. In Indonesia, Malaysia, Brunei, the Maldives and Somalia, it is not mandatory. In Iran, Afghanistan and Aceh province of Indonesia it is compulsory by law.

The Indian situation has been more complex. While earlier it was prevalent, burqa and hijab started being more in use particularly after the demolition of the Babri mosque in Ayodhya, Uttar Pradesh. Globally America’s agenda of controlling the oil wealth of the Gulf region and then bringing forth the propaganda ‘Islamic terrorism’ not only increased the insecurity of Muslims all over it added to the already existing insecurity of Muslims in India.

Another factor adding to the increased use of burqa/hijab was the returnees from the Gulf when it had mandatory use of these practices. As the insecurity of Muslims in India increased, these practices went up gradually. Currently, a number of Muslim parents insist on wearing of hijab/burqa right from an early age for their daughters. This in turn becomes a sort of cultivated choice for the girls. They do feel in tune with the opinion of society and stick to it.

It is now a matter of choice for many and that should be respected. If we see the whole picture this choice to some extent is constructed. When 5-7 years old girls are made to adorn these, they will take to it. There are some scholars of Islam who claim that as per the Quran it is mandatory for Muslim girls to wear it once they attain puberty. The likes of Asghar Ali Engineer and Zeenat Shaukat Ali tell us that Burqa and Niqab are not mentioned in Quran. Only hijab is mentioned (seven times) but its use is for partition, not for piece of cloth covering the head and neck. Hijab types had been prevalent in many other communities, Christian nuns, Jews and other societies. In India, ‘Ghunghat’ (sari veil) at one time was very prevalent, but its practice is declining.

Surely, the cultural construct of these choices for women is in the backdrop of the patriarchal control of women’s bodies. On similar lines after the Roop Kanwar sati (woman jumping into the funeral pyre of husband), the then BJP vice president Vijaya Raje Scindia had taken a march to Parliament, with the slogan that "Committing sati is the right of Hindu women"!

In today’s situation, any further raking up issues like this will weaken the attempts of Muslim girls to have a good education. The present issue will push them back as far as their empowerment through education is concerned. The increasing insecurity is fanning the response of the Muslim community. In turn, the court ruling will push back the ongoing process whereby Muslim girls are trying to come up in education. The Hindu right-wing is already very strong, and the extreme Muslim right-wing is playing the role of provoking and strengthening the Hindu right-wing. And the victims will be Muslim girls and the Muslim community at large.

Ram Puniyani a former IIT Bombay professor, is Chairman, Center for Study of Society and Secularism, Mumbai. Views are personal