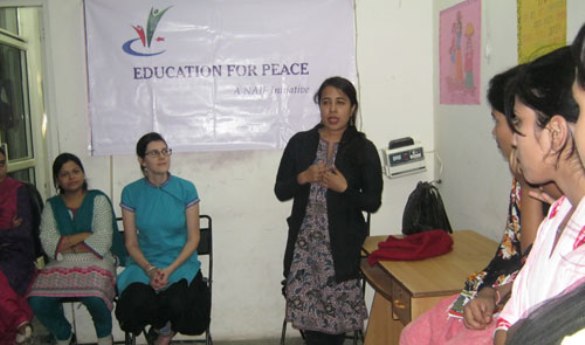 In a lively interaction organised at EDUCATION FOR PEACE, New Age Islam between Mrs. Nilakshi Rajkhowa, Director of Advancement of Women and Youth Affairs, Baha’i Office of Public Affairs of the National Spiritual Assembly of the Baha’is of India and the students of EDUCATION FOR PEACE, New Age Islam on the topic “Child's Education is a Key Driver for Peace” various spectrums of the children’s life opened up and discussed to the full satisfaction of the students and Mrs. Nilakshi Rajkhowa. We brief the discussion as under.

EDUCATION FOR PEACE teaches English, Computer and Accounts (Tally etc.) on a daily basis to 200 young people between 12 to 18 years of age from impoverished background. In addition to this, it provides these children with identity-related workshops to develop their critical and independent eye, widen their mental outlook, and thus strengthen the building up of their personality. 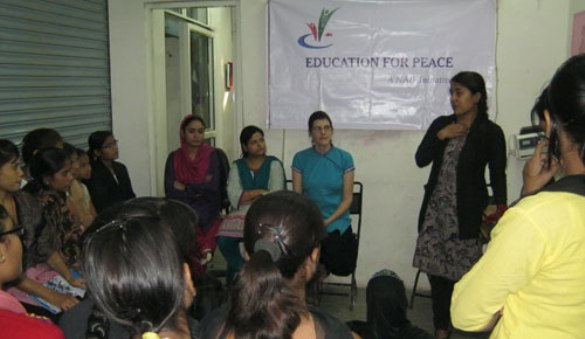 On 21st November 2013, the centre was honoured by the presence of Mrs. Nilakshi Rajkhowa who came to discuss with our children on the important questions of child's education, friendship, and equality between men and women. Mrs. Sonika Rahman, the Education Centre in Charge, organised the interaction and encouraged our children, both boys and girls, to attend and participate.

Nilakshi introduced the students with the topic of interaction, at length, so that the students are able to ask the questions which trouble them the most.

Nilakshi engaged the dialogue by asking to the students the meaning of friendship and by feeding them with the important elements that shape up a valuable friendship. She also spent some time giving in-depth explanations about the principles of truth and honesty. With the inputs of the students, she listed the positive outcome of building up relations based on such principles for one's life. She then moved to education and emphasized on its pivotal role in generating social change. Children are the key drivers for social change if they get a proper education and among the children, the girls' education should be the first priority focus as they are mothers in the making. Soon or later, they will be providing guidance to their children, teaching them values, and encouraging them at undertaking good deeds. They would also tell their sons how to become husbands and fathers practicing and promoting gender equality. The absence of education or poor education leads to ignorance, intolerance, and in some cases extremism. Indian society faces a wide range of issues due to the rampant lack of education. A student also mentioned that certain type of studies is not well perceived by others. It is true that very less children in India have access to good quality education and it is why it is necessary to study as much as possible and give to studies the best of our intellectual capabilities.

She then came to very sensitive issues such as gender bias. She questioned the children about whether they suffer from gender discrimination at home. Initially not much opening up, some children finally recognized the existence of discrimination, and the fact that sons are often preferred over daughters. Nilakshi emphasised on the very necessity to pursue studies as far as possible for both boys and girls even though it might be difficult and it comes at a cost. She also asked to boys to help their sisters continuing their studies.

Nilakshi finally highlighted how spirituality helps to look at the life and world in a positive and constructive manner, to pull oneself towards self-personality improvement. Religions are many in the world and their respective customs are not only multiple even opposed to customs of other religions at times. When not properly understood, religions can become source of evils and conflicts. People fight against each others in the name of religion but when they do so, they do not believe in God as all religions promote the same universal values which are love, compassion, forgiveness, etc. Unity in diversity is one of them. Nilakshi stressed that, in the class, the children were coming from different families, different backgrounds and were having different praying habits and yet, they were studying together, playing together, and enjoying the same activities, sharing the same laughs and objectives in life. They were encouraged to remember that whenever they would have an encounter with communal aggressiveness and violence. Religions are there to help people improve and live together, not to divide them. 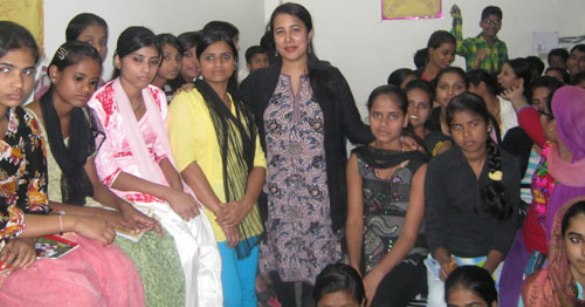 At the end of the interaction, the children said that they were very happy with it, and showed real eagerness to participate to more of such discussions as they understand it broadens their views and experience. This was possible thanks to Mrs. Nilakshi Rajkhowa and EDUCATION FOR PEACE is grateful that she accepted to come and talk on this theme which is of major importance.

Mrs Nilakshi Rajkhowa is the Director of Advancement of Women and Youth Affairs, Bahá’í Office of Public Affairs of the National Spiritual Assembly of the Bahá’ís of India,