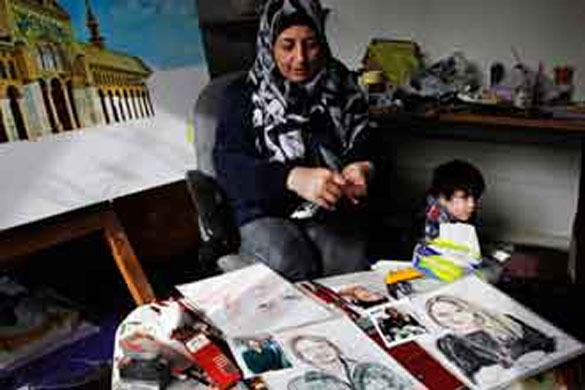 Photo: Lina Mahameed, a Syrian artist and refugee from Daraa, works on portraits of some of the people killed in the Nov. 13 Paris attacks, in Amman, Jordan. — AP

•  101 Women Related To Soldiers Get Teacher Jobs in Saudi Arabia

Lina Mahameed, a Syrian artist and refugee from Daraa, works on portraits of some of the people killed in the Nov. 13 Paris attacks, in Amman, Jordan. — AP

WHEN Syrian war refugee Lina Mahameed saw TV reports of the recent Paris attacks, she recognized her own story reflected in the brutality.

The 41-year old artist is now drawing portraits of some of the 130 people killed in the Nov. 13 attacks in the French capital, for which the extremist Daesh (the so-called IS) group claimed responsibility.

Mahameed said they fell victim to the same fanaticism that killed her 16-year-old son Yasser at the beginning of Syria’s civil war. “When these French people died in Paris, I felt their pain,” she said in her living room in the Jordanian capital of Amman, wearing a speckled headscarf.

“I felt what every mother feels when she loses someone to such a criminal act,” Mahameed said, gesturing with a wine-colored pencil. “Their tragedy is like our tragedy.”

Mahameed found photos of the victims on the Internet, and used print-outs for pencil sketches of their faces: a young blonde girl seated before a meal, a bespectacled man in a green jacket smiling calmly, a dozen people staring straight at the camera.

She is now filling in the portraits’ colors. She is working in her Amman apartment, where the walls are covered with canvases of beauty and disaster: elks in a golden forest; a frowning clown with a handful of balloons; children behind barbed wire, screaming next to splattered blood; a man clutching a stomach wound; a half-finished painting of Damascus’ Umayyad Mosque, symbolic of home and the cultural heritage she, too, fears is targeted by extremism sweeping the world.

When asked, she brings a portrait of Yasser from the back room on April 24, 2012, Syrian government tanks shells blew up part of the family home in the southern town of Deraa, cradle of the uprising against Syrian President Bashar Al-Assad that quickly turned into a civil war.

When the family fled across the street, a sniper killed Yasser. Government forces kept the body for 15 days before the family could bury him.

Mahameed, left with three children, hopes the portraits will warm the hearts of the victims’ families, though she hasn’t figured out how to deliver the drawings. “We are martyrs, and they are martyrs,” she said. “Innocent people don’t have anything to do with politics or other countries.”

Mahameed was encouraged to paint by her father, an architect, and she had her first exhibition at age 14.

She sold paintings in Syria and the United Arab Emirates before marriage. Motherhood slowed her career, but the war brought it to a halt.

After the death of Yasser, the family spent a year on the move, trying to evade street battles. The Mahameeds decided to flee Syria when government soldiers entered their lodging and saw a picture of Yasser with the label of “martyr.”

“They said he wasn’t a martyr, but a terrorist,” Mahameed said. Troops poured gasoline in their rooms and set fire to the building.

The family left for Egypt where they lived for eight months before Mahameed decided to split from her husband. She flew to Amman in August 2013, along with 16-year-old daughter Ronza and sons Usama, 9, and Rayan, 6.

Mahameed hopes to leave Jordan soon because she is unable to work legally. Through the tragedies, her art has remained. She believes it can chase away some of the dark images she says have infected the psyches of Syrian children, including that of Usama — whose notebooks are filled with war scenes.

“We must heal psychologically, and draw out these dark ideas from inside them,” Mahameed said.

101 Women Related To Soldiers Get Teacher Jobs in Saudi Arabia

RIYADH: Education Minister Ahmed Al-Issa has approved the assignment of 101 women teachers who are wives and daughters of troops involved in “Operation Restoring Hope” in Yemen.

The assignment of the teachers, from various regions, will be temporary and will last for one semester. If they want it to be extended, they should make the request before the semester ends.

“The teachers will be assigned jobs in various schools,” said Mohammed bin Abdullah Al-Heran, director of teachers’ affairs and in charge of the General Administration of Education in Riyadh region.

He said the administration has completed the electronic registration of delegates who are interested to work as teachers, adding that there are vacant positions for them.

Earlier, the education minister announced that the services of 667 female teachers have been extended until the end of the academic year upon their request.

He said the request was in recognition of the sacrifices of Saudi troops involved in “Operation Restoring Hope” and also on humanitarian grounds. “Besides, the teachers’ services are needed.”

He added: “We need the teachers to mold the character of the children and imbue in them knowledge which will be the foundation of their personality as they grow older.”

ISLAMABAD: Prime Minister Nawaz Sharif vowed Pakistan would eradicate “evil” honour killings as he congratulated director Sharmeen Obaid-Chinoy on her Oscar nomination for a harrowing documentary on the practice.

“A Girl in the River: The Price of Forgiveness,” which follows the story of a rare survivor, was nominated in the documentary short category of the Academy Awards on Thursday.

Hundreds of women are reportedly murdered by their relatives in Pakistan each year on the grounds of defending family “honour”.

Their male murderers are often “pardoned” by relatives under the country's controversial Islamic blood money laws that allow murderers to escape punishment.

A statement from the Prime Minister's Office late Thursday offered Chinoy, who made history in 2012 when she won Pakistan's first Oscar for another documentary, Nawaz's congratulations.

“Honour killings, the theme of the film, afflict several segments of Pakistani society,” it quoted the premier as saying.

He expressed the government's commitment "to rid Pakistan of this evil by bringing in appropriate legislation”, the statement continued, adding that Chinoy's “insights” could prove helpful.

Chinoy said on Twitter she was “delighted” that the prime minister had made the commitment.

“Next step is to push all the politicians to call a joint session & get the anti honour crime bill passed that has lapsed in parliament!” she said in a tweet.

Chinoy was feted across Pakistan in 2012 when she won the country's first Oscar for “Saving Face”, a 40-minute documentary that exposed the horrors endured by women who survive devastating acid attacks.

It focuses on two women, Zakia and Rukhsana, as they fight to rebuild their lives after being attacked by their husbands, and British Pakistani plastic surgeon Mohammad Jawad who tries to help repair their shattered faces.

Acid attacks, which disfigure and often blind their overwhelmingly female victims, have long been used to settle personal or family scores in Pakistan, with hundreds of cases reported each year.

The attacks along with honour killings depict the state of women's rights in Pakistan, where they are frequently treated as second-class citizens with no legislation to fall back on in cases of domestic violence.

IT seems that the relationship between the Commission for the Promotion of Virtue and the Prevention of Vice (Haia) and cultural institutions is becoming more tense day by day. One of the reasons for this is the mixing of genders in public places.

Whenever this issue arises, matters become strained between the Haia and these institutions. Haia members view the intermingling of men and women as dangerous and something that should be prevented by all means, even if it means stopping the public activities that involve such intermingling. Recently, a few Haia members barged into an event being held by the Taif City Literary Club that had both men and women in attendance.

Despite the fact that the event was open to all members of the public and was held in an open place, the fear of the mixing of genders made some Haia members take drastic action, such as attempting to stop the event, attacking the organizers and using foul language with them. Although the event ended peacefully, the debate over it continues.

The organizers of the event asserted in newspapers that there was no intermingling of men and women at the event, and added that the event took place in two separate halls: one for men and the other for women. As far as I know, all clubs have separate halls for men and women. I think the organizers made a mistake when they publicized the issue and denied that any form of intermingling took place at the event. This denial only gives the Haia more strength. As far as I know, there are no laws against the mixing of men and women in public places. But why do Haia members and the organizers think otherwise?

I hope such incidents do not take place in the future. We must acknowledge the fact that the mixing of men and women in public is not a crime. It is something natural that happens on a daily basis at hospitals, malls and the two Grand Mosques.

family of an Afghan woman who has given birth to a quintuplet has received financial aid from the government, the Ministry of Women’s Affairs (MoWA) said.

According to MoWA, the husband of the woman was handed over AFN 30,000 in a bid to help the woman and the family to raise the quintuplets.

A statement by MoWA said the Women’s Affairs Minister Dilbar Nazari met with the husband of the woman and urged him to provide necessary care for the children.

She also called on provincial government in Samangan to help the family by providing all necessary support.

News regarding the birth of the quintuplet emerged from the northern Samangan province of Afghanistan earlier in the month of August last year.

The provincial public health chief in northern Balkh province Noor Mohammad Faiz earlier confirmed that the newborns are all baby boys and both the children and the mother are in better health condition who were taken to Balkh province to receive better care.

This comes a woman gave birth to quadruplets in western Herat province of Afghanistan late in the month of November last year.

The woman was reported to be 35-year-old and was in better health condition, according to the provincial public health officials.

The officials further added that the quadruplets include one baby boy and three baby girls, who are all in better health condition.