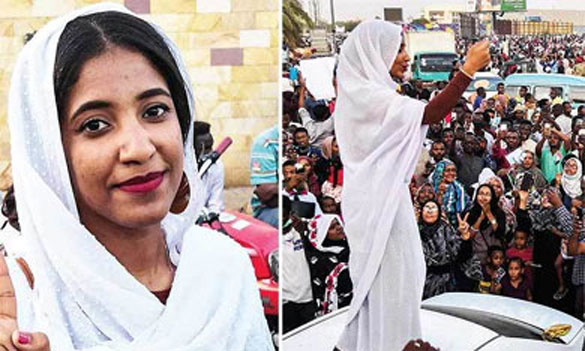 One of the most popular images from Sudan’s protests that led to the overthrow of Omar al-Bashir is that of Alaa Salah – a young, female university student. The image of her speaking to a crowd highlighted the presence and role women had in the uprising.

While the video challenged narratives prevalent in global media – which sometimes portray African and Muslim women as victims who lack agency – Alaa Salah’s courage is but an extension of the roles that women have played throughout Sudan’s history.

Warrior queens and queen mothers had crucial power in Sudan’s ancient kingdom of Kush and its metropolis, Meroe (circa 1069BC to AD350). Women, like the poet Mihera Bit Abboud, mobilised men against the Turko-Egyptian colonial invasion of Sudan in the 1920s and Anglo-Egyptian rule in the 1950s.

Women were also major actors in the opposition to Bashir’s regime throughout its 30 years of rule, which began when he led a military coup against a democratically elected government in 1989. This resistance was not unusual given the regime’s discrimination against women, in both law and practice. This included the use of rape in war and also violence against women activists in youth movements.

There were hopes that the overthrow of Bashir would lead to change in the situation of women. But there are now worries under the Transitional Military Council, which assumed power and has since violently suppressed protesters. The council has created an atmosphere where it is difficult to advocate for broader participation for women, commitment to women’s human rights, or gender equality.

These become less of a priority as the situation worsens.

Sudan must learn from the experiences of neighbouring countries. Take Egypt. The transition to civilian rule, following the Arab Spring in 2011, was accompanied by a backlash in women’s human rights and a rise in sexual violence and harassment.

I started teaching about the uprisings in north Africa (Arab Spring) as the protests were unfolding. As with Sudan, women played a key role in the 2010 and 2011 protests. Initially, Egyptian feminists described Tahrir Square, where Egyptians camped, as a “utopia” where sexual harassment against women in public spaces, for example, disappeared. Unfortunately, women later faced various forms of sexual violence and harassment in the streets. The government also attacked women’s organisations.

Leaders in Egypt’s women’s movement continue to face arrest and detainment. The director of Nazra for Feminist Studies, Mozan Hassan, was unable to travel to New York to attend the United Nations’ Commission on the Status of Women this year because of a government-imposed travel ban.

It is possible, however, to also learn from partial successes in post-conflict countries on the continent. These include Rwanda and Liberia.

Rwanda has one of the highest number of women legislators in the world. The country has also introduced several laws that promote women’s rights.

In Liberia, a broad and vibrant women’s peace movement played a key role in resisting the oppressive government of Charles Taylor. This ended war and paved the way for Liberia to elect the first woman president in an African country. Former president Ellen J Sirleaf introduced important laws and policies to safeguard women’s rights during her presidency.

As Sudan mourns for those who have lost their lives in recent crackdowns and massacres, there is an urgent need for immediate action – in the form of independent investigations – against human rights violations. These are crucial for accountability.

Looking to the future, as I argue in my book Gender, Race, and Sudan’s Exile Politics: Do We All Belong to this Country?, Sudan needs to build a strong and independent women’s movement that reflects the diverse priorities, realities, and visions of Sudanese women.

And as the country looks to a possible transition, the ruling transitional council must hand power over to a civilian-led government with at least 40 per cent representation of women. It is crucial to ensure that women have meaningful participation at all levels, and that commitments to gender equality and women’s human rights permeate constitutional, legal and policy reform.

Nada Mustafa Ali is a faculty fellow at the Centre for Governance and Sustainability and a lecturer in women’s gender and sexuality studies at the University of Massachusetts Boston.