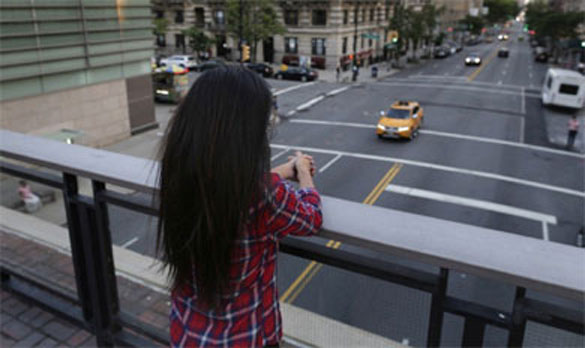 In this July 12, 2016, photo, Sameena, 22, a member of the Indian Dawoodi Bohra community, overlooks Amsterdam Ave. from a bridge during an interview with the Associated Press, in New York. While living her dream of being a graduate student at an Ivy League school in America, Sameena is also gradually coming to terms with the knowledge that she was circumcised at seven. (AP/Julie Jacobson)

When Bilqis talks about having circumcised her daughter, she goes back and forth on how she feels — sometimes within the same sentence.

The 50-year-old doctor defends what is widely known as female genital mutilation within her small, prosperous Shia Muslim sect in India, saying it's a mild version that amounts to "just a little nick. No harm done." Yet she also acknowledges regret and guilt at putting her daughter through a practice the United Nations calls a violation of girls' rights.

"It's really nothing, it changes nothing," repeats Bilqis, who asks to be anonymous except for her religious name because of the personal nature of the subject. But she adds: "I have no doubt in my mind that it is not helpful. ... If I had a young daughter now there's no way I would have her circumcised."

The struggle within Bilqis and her Dawoodi Bohra community reflects a growing debate over the best way to address a custom that is proving stubbornly hard to eradicate. At least 200 million girls and women alive today have undergone some form of female genital cutting, according to the U.N. — 70 million more than in 2014 because of increases in both population and reporting. And the U.N. predicts the number of victims will increase significantly over the next 15 years because of population growth.

Faced with this prospect, experts in the respected international Journal of Medical Ethics in February proposed permitting small female genital cuts that "uphold cultural and religious traditions without sacrificing the health and wellbeing of girls and young women." But this approach is already carried out in the Bohra community and is proving highly controversial.

"They always say it's just a nick and a touch, but there are incidents where things have gone horribly wrong," says Masooma Ranalvi, who broke the silence around female genital mutilation in her community last year with a series of online petitions that sought to ban it.

Ranalvi remembers when she was 7, her grandmother promised her candy and ice cream. Instead, she was taken to a dingy room in a back alley. Her dress was pulled up and her legs and arms held down. A sharp pain followed. She came home in tears.

She only understood what had happened in her 30s, when she read about female genital mutilation.

The Dawoodi Bohras are an affluent trading community of about a million people concentrated mostly in Mumbai, but also seen across the United States and Europe. Observant men wear white and gold embroidered caps, and women a long, colourful tunic and a scarf over their hair.

The Bohras are known for their liberal attitude toward the education of women, yet the community is also tightly controlled by an entirely male clergy. From Mumbai to New York, medical professionals perform circumcision for girls or Khatna with the blessings of the religious head known as the Syedna. The procedure goes back to the community's roots in Yemen.

Circumcision has become a battleground for the two Bohra men vying for succession, the half-brother and the son of the former Syedna. The half-brother says it is time to end the practice. The son says the tradition must continue and notes that Bohra men are also circumcised. Activists protest that the two cannot be compared because male circumcision has some health benefits.

Alefiya, a 34-year-old social worker in the United States, remembers the Khatna being done by her grandmother's sister in a cold basement in New York. It was awkward and painful, she says.

Alefiya, who asked for her full name not to be used for privacy, objects as much to the message sent as to the act itself. Older Dawoodi women call the clitoris "Haraam Ki Boti" or sinful flesh — the flesh that can lead a woman astray.

"It's horrible, it's disgusting, that these completely natural experiences are made to feel dirty," she says. "The guilt of sexuality is always on our heads."

Bilqis was circumcised as a child but has only the faintest memory of it. It was neither harmful nor traumatic for her, she says. As a doctor, however, she remembers a child coming to her after being cut too deep, requiring blood vessels to be cauterized.

Fifteen years ago, she circumcised her daughter out of a sense of religious obligation. When it was done, she remembers thinking, "One social milestone passed. One responsibility dealt with."

Sameena, now 22, is a graduate student at an Ivy League school in America. She is gradually coming to terms with her clear memory of being circumcised at age 7. It didn't hurt, but the memory makes her uncomfortable, although she can't say exactly why.

The next time it came up was when she was 15 or 16, with other Dawoodi Bohra girls at school. When she asked, her mother told her it was something done in their community.

Spurred in part by the increasing discussion around Khatna in her community, Sameena began researching it. First there was denial, and then fury. She says many Bohras are misled to believe that Islam condones the procedure.

She has confronted her mother, but her anger is really at the community. She wants the Bohra religious leadership to come out against the practice.

"It's not going to end by not talking about it. You have to keep bringing it up as something that should not be done," she says. "That's the only way to tackle it."