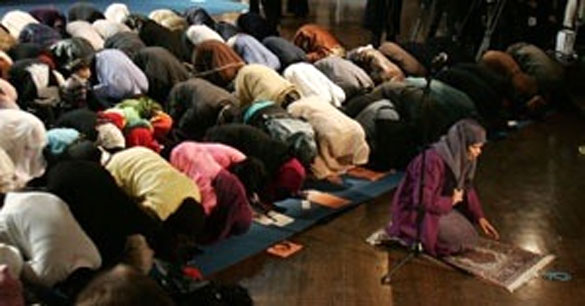 Islam has laid some guiding principles on how and to what extent men and women can interact with each other. Though they have not been completely banned from appearing in public as they have been permitted by the Quran to do business with Ghair Mahram men with some conditions and some women even fighting in battles in various capacities, it does not permit a free for all for women, whether in public or in religious affairs.

Therefore, whether women can attend collective prayers in mosques under male imams has been a subject of debate. Though there were women during the life of the holy Prophet (pbuh) who led the prayers of women only there has not been a reliable precedent of women leading prayers of mixed groups. However, there is a Hadith or two that say that women were permitted to lead prayers of a mixed group of men and women.

There is a Hadith with gives precedence of women imams. The Hadith goes thus:

The Prophet (peace be upon him) commanded Umm Waraqah, a woman who had collected the Qur’an, to lead the people of her area in prayers. She had her own mu’adhdhin.1 (Al-Fath al-Rabbani li Tartib Musnad al-Imam Ahmad Ibn Hanbal al-Shaybani ma'a Sharhihi Bulugh al-Amani )

According to the Hadith, Umma Waraqah was commanded by the holy Prophet (pbuh) to lead the prayers of her area (dar). However, scholars differ in the meaning of the Arabic word dar which means both the house and an area like Darul Islam or Darul Harb. Scholars suggest that since Umma Waraqah was a religious scholar and collector of Quran and was a hafiz of the Quran she was permitted or commanded to lead the prayers of her tribe, clan or cluster of related families as was the order in the Arab society. The houses were not like the nuclear families of today but a cluster of the families of the same tribe or clan. From her example, it also becomes clear that a woman can also become a mufti or a religious authority if she has the required knowledge of the Quran, Sunnah and jurisprudence. 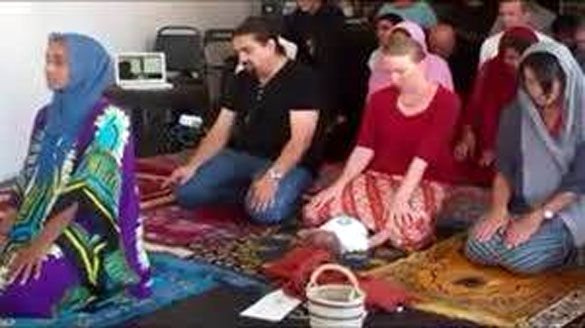 There is another Hadith which proves that women also attended collective prayers in mosques under the leadership of the holy Prophet (pbuh).

Abu Huraira reported: The Messenger of Allah (peace be upon him) said: Glorification of Allah is for men and clapping of hands is meant for women (if something happens in prayer). Harmala added in his narration that Ibn Shihab told him: I saw some of the scholars glorifying Allah and making a gesture. (Sahih Muslim: 850)

The Hadith enjoins on men to sing glorification of Allah and women to clap if some mistakes occur during the prayer.

There is another Hadith that shows that women also participated in prayers in mosques:

One more Hadith in this connection:

“Sahl b. Sa'd reported: I saw men having tied (the ends) of their lower garments around their necks, like children, due to shortage of cloth and offering their prayers behind the Apostle of Allah (may peace be upon him). One of the proclaimers said: O womenfolk do not lift your heads till men raise (them). (Sahih Muslim: 883)

Other Hadith that permits women to go to mosques:

Salim narrated it from his father ('Abdullah b. Umar) that the Messenger of Allah (may peace be upon him) said: When women ask permission for going to the mosque, do not prevent them. (Sahih Muslim: 884)

Another Hadith settles the issue:

Ibn 'Umar reported: Grant permission to women for going to the mosque in the night. His son who was called Waqid said: Then they would make mischief. He (the narrator) said: He thumped his (son's) chest and said: I am narrating to you the Hadith of the Messenger of Allah (peace be upon him), and you say: No! (Sahih Muslim: 890)

Zainab, the wife of Abdullah (b. 'Umar), reported: The Messenger of Allah (may peace be upon him) said to us: When any one of you comes to the mosque, she should not apply perfume. (Sahih Muslim: 893)

All the Hadiths mentioned above confirm that the Prophet (pbuh) permitted women to go the mosques. However going to mosques was not made mandatory for them. The prophet (pbuh) only said that if any woman wanted to offer prayer in the mosque, she should not be prevented from doing that even at night. The women were told not to apply perfume when going to the mosque. 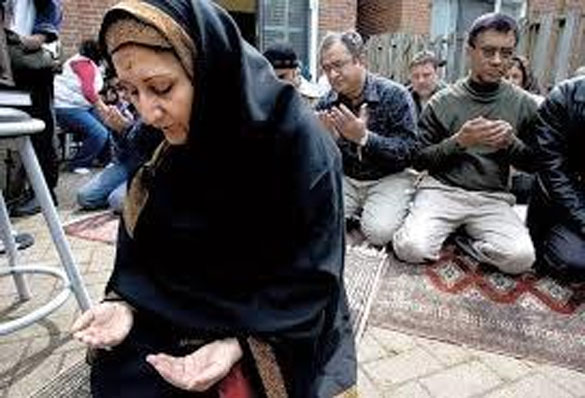 It was not that the holy companions and general Muslims during the life of the Prophet (pbuh) did not have reservations but they had to accept the Prophet (pbuh)’s stand on the issue. The Hadith quoted above shows that some of the holy companions were not reconciled to the idea of sending their women to mosques. Their reservations were based on the social and moral implications of such a freedom given to women. They thought that giving permission to women to go to the mosques at nights for Isha prayer and in the dawn for the fajr prayer was fraught with risks and might give way to moral and sexual crimes. The Prophet (pbuh) on the contrary had a very pragmatic and broadminded approach towards religious beliefs. His view was that one cannot prevent a woman from going to mosque to offer obligatory prayers any time of day or night merely on the suspicion or presumption that she might indulge in immoral or sexual crimes under the cover of going to the mosque. Doing so would mean considering all the women of bad and vulnerable character. Another point that some anti-social elements might take the opportunity to harass women at night or at dawn can be refuted on the ground that ensuring safety to women was the responsibility of the government and so the women should not suffer because of the inefficacy of the law enforcing agencies.

Hadhrat Aisha had echoed the apprehension of this section in a Hadith:

'Amra, daughter of Abd al-Rahmin, reported: I heard 'Aisha, the wife of the Apostle of Allah (may peace be upon him) say: If the Messenger of Allah (may peace be upon him) had seen what new things the women have introduced (in their way of life) he would have definitely prevented them from going to the mosque, as the women of Bani Isra'il were prevented. (Sahih Muslim: 895)

However, during the last few years some women’s organizations in India and the West have been fighting for their rights to offer prayers in the mosque along with men. However, their fight has not borne fruit as the male dominated society has not conceded to their demands and arrangements have not been made for the inclusion of women in mosques. This led them to organize some major festival prayers like Eid and Eid al Adha in open places in India.

It becomes clear, therefore, that there is no dispute on the fact that women have been permitted to offer prayers in mosques and also to lead the prayers of women. Whether women can be allowed to lead prayers of mixed groups in Muslims is a subject of debate.

Those in favour of women leading prayers of men and women together present the example of Umm Waraqah who was reportedly permitted rather commanded to lead the prayer of her dar (clan, tribe, cluster of families) meaning a mixed congregation. From this it has also been inferred that a woman can lead the prayer at home where the male and female members of her family are present. But there has been also a tradition of women leading prayer of mixed groups not in the modern day west but it also finds precedence during the time of the kharijites, ironically the most conservative of Muslim sects.

Ghazala, the wife of the sect in the Kharijites, Habib Ibn Yazid al Haruri, led the prayer of male warriors in Kufa in 699 AD as the group believed that a woman could lead the prayers of men if she possessed the required knowledge of Islam. Earlier, the daughter of Abu Sufiyan, Juwaiyriyya had led the prayers in the battle of Yarmuk.

The west which is liberal in matters relating to women and the women have an assertive mindset which is ingrained in them since the childhood has only encouraged women to break the grounds previously held by Muslim males. For this the neo-Muslim women who embraced Islam brought with them the liberal mindset with them studied Islam and found a big role for them in their adopted faith.

It was first Amina Wadud, a Christian convert and an Islamic scholar who delivered the Friday Khutbah (sermon) in Claremont Main Road Mosque, Cape Town, South Africa. This was a path breaking move which inspired other female Islamic scholars and religious feminists to take this reformist tradition forward. Other speakers who delivered Jummah Khutbah in Cape Town and Johannesburg were Aisha Jennifer Roberts, Zakiya Seguro, Farhana Ismail, and  Moefidah Jaffer. Within the next two years, this tradition of women leading prayers in mosques in Africa caught up where both men and women served as imams.

It should be noted that the tradition of women leading prayers has been promoted by the Christian converts though born Muslim women have also started taking lead in this direction. This tradition has taken root in Canada where women have been leading prayers in mosques. The United Muslim Association and Muslim Canadian Congress have been at the forefront of the movement giving women the opportunity to lead the prayers of men and women congregants in mosques. Maryam Mirza, Yasmeen Shadeer, Raheel Raza and Pamela J Taylor had the distinction of leading Eid and Jummah prayers in mosques in Toronto.

A mosque in Morocco is said to be giving training to women for serving as imams in mosques. In Turkey, the government has taken up the task of appointing women as waizs (preachers) in mosques. The government also appoints women muftis for various religious purposes like leading groups to pilgrimage to Makkah and deputy muftis to supervise the work of imams of mosques.

Since 2008, Amina Wadud and Raheel Raza have also started the tradition of leading Friday prayers in Britain and the US. There are other Muslim and non-Muslim majority countries where similar tradition is being followed.

However, it is not that this new tradition of women preachers and imams has not met with resistance and opposition. Amina Wadud has received death threats and mixed congregants have been heckled outside mosques in Britain by conservative groups. But this idea of mixed congregation led by women has caught up among the Muslims in the West and in the African countries.

As for its precedence in Islamic history, it does not present a very convincing picture. The views of Kharijites are not acceptable to the larger Sunnah wal Jama’ah. The precedence of Abu Sufiyan’s daughter and Haruriyyah’s wife leading men in prayer in the battlefield cannot be an example to follow in times of peace. Those can be considered war time exigencies. That the holy Prophet (pbuh) commanded Umm Waraqah to lead the mixed congregation in her clan or tribe may be a specific case according to the situation of her clan. There is no general Hadith permitting all the women to lead mixed congregations in mosques. And given the fact that Islam does not approve of freely mixing up of stranger men and women in public places also goes against those supporting female imams in mosques.