Mona Eltahawy: ‘The Women of Egypt are a Red Line’ 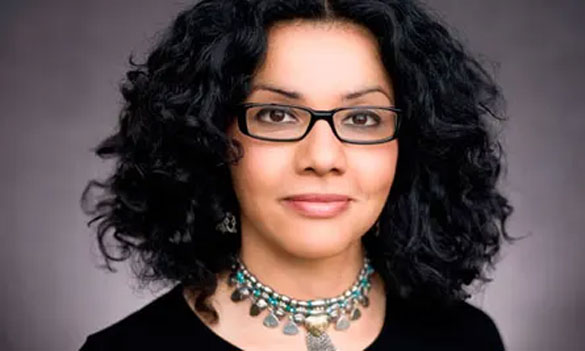 Mona Eltahawy, 44, from New York City, is seen with both arms in casts after being released by Egyptian security forces in Cairo on November 24, 2011. Photo AP Courtesy Mona Eltahawy

Mona Eltahawy, who was trapped, beaten and sexually assaulted by Egyptian security forces, tells her extraordinary story for the first time.

The last thing I remember before the riot police surrounded me was punching a man who had groped me. Who the hell thinks of copping a feel as you're taking shelter from bullets? Another man tried to protect him by standing between us, but I was enraged, and kept going back for more. A third man was trying to snatch my smart phone out of my other hand. He was the one who had pulled my friend Maged Butter and me into an abandoned shop — supposedly for safety's sake — and he wouldn't let go of my hand.

It was November. Maged and I had come from Tahrir Square to Mohamed Mahmoud Street, the frontline of clashes between protesters and the military, following a violent invasion of Tahrir by police and soldiers a few days earlier. Almost 40 people had died — including a distant relative — and 3,000 were wounded.

Maged tried to pull me away. “Enough smacking the groper let the phone go.” It's clear to us both now that those men we'd met among the protesters on Mohamed Mahmoud Street had entrapped us. They worked with the security services, who were a few metres away, just beyond no man's land, and their job was to hold on to us until the riot police came.

And when they did come, I was the only one left in the deserted shop. I thought Maged had managed to escape, but he later told me he was nearby being beaten, able to see riot police beat me, too. “You were smart to defend your head,” he said. He needed stitches to his face, and still has contusions to his head and chest.

I suffered a broken left arm and right hand. The Egyptian security forces' brutality is always ugly, often random and occasionally poetic. Initially, I assumed my experience was random, but a veteran human rights activist told me they knew exactly who I was and what they were doing to my writing arms when they sent riot police conscripts to that deserted shop. Bashar al-Assad's henchmen stomped on the hands of famed Syrian cartoonist Ali Farzat. Our dictators tailor wounds to suit their victims' occupations.

As the nightsticks whacked at my arms, legs and the top of my head (in the week that followed, I would discover new bruises every day), two things were at the front of my mind: the pain and my smart phone.

The viciousness of their attack took me aback. Yes, I confess, this feminist thought they wouldn't beat a woman so hard. But I wasn't just a woman. My body had become Tahrir Square, and it was time for revenge against the revolution that had broken and humiliated Hosni Mubarak's police. And it continues. We've all seen that painfully iconic photograph of the woman who was beaten and stripped to her underwear by soldiers in Tahrir Square. My phone fell as the four or five riot policemen beat me and then started to drag me towards no man's land. “My phone, I have to get my phone,” I said, and reached down to try to retrieve it. It wasn't the Twitterholic in me that threw herself after the phone, but the survivor. For the first three or four hours of detention, I knew they could do anything and no one would know. In the event, it was near-miraculous that, while I was at the Ministry, an activist with a Smartphone came to discuss setting up a truce between protesters and security. As soon as he signed me in to Twitter, I sent out, “beaten arrested at Interior Ministry.” And then his phone battery died.

Most people detained the same week I was taken in ended up at a police station or jail, but for some reason I was taken to the Interior Ministry and was then handed over to military intelligence for almost 12 hours. The sexual assault couldn't have lasted more than a few minutes, but the psychic bruise remains the freshest.

The orange midnight air — a cocktail of street lights, an adjacent school on fire, and air that was more tear gas than oxygen — and the black outlines of the helmeted riot policemen invade my thoughts every day, but I feel as though I have dissociated myself from what happened. I read news reports about a journalist whose arms were broken by Egyptian police, but I don't connect them to the splints around my arms that allow only one-finger typing on a touchpad, nor with the titanium plate that will remain in my left arm for a year, to help a displaced fracture align and fuse.

But the groping hands — that, I know, happened to me. Sometimes I think of them as ravens plucking at my body. At one point I fell. Eye-level with their boots, all I thought was: “Get up or you will die.” They dragged me to the Interior Ministry, past men in plain clothes who were wearing the same surgical masks that we Tahrir-side civilians had worn against the tear gas. I almost shouted out, “Are you friend or foe?” Their eyes, dead to my assault, were my answer.

I began to panic. “They're probably going to charge me with spying.” I had lived in Israel for a period, where I had worked as a Reuters correspondent.

“You're safe now, I'll protect you.” A senior plainclothes officer reassured me. “If I wasn't here, there would be no one protecting you from them. See them, over there? Do you know what they'd do to you?” He was pointing to a mob just steps away. Even as the officer offered hollow protection, he did nothing.

It was an older man, from the military, who ended it. “Get her out.” “Why are you at war with the people?” I asked him. He looked me square in the eyes, fought his tears and swallowed. He couldn't speak. Others asked me again and again: “Why were you there?” “I'm a journalist, I'm a writer, I'm an analyst,” I said. But really I wanted to tell them I had longed to touch courage. It lived on Mohamed Mahmoud Street where young men — just boys in many cases, with their mothers' numbers written on their forearms in case they ended up in a morgue — would face off with security forces. Some of those who survived the tear gas and the bullets — rubber-coated and live — lost eyes. Security sharpshooters liked to aim for the head.

For months, Tahrir Square had been my mental touchstone: in New York City, where I live, and wherever I travelled to lecture on the revolution. But it was impossible just to stand by in the square and watch as the Motorbike Angels — volunteers who came on bikes to aid the overworked medics — zipped towards the field hospitals with their unconscious passengers, asphyxiated from the tear gas — and often worse — from the Mohamed Mahmoud frontline.

“If I die, I want to be buried in my Moroccan djellaba. It's laid out on my bed, ready,” tweeted blogger and activist Mohamed “Gemyhood” Beshir. The hits of tear gas he inhaled pushed him back, so younger men would break his fall and fill in for him on the frontline until he recovered.

Throughout my detention, I demanded medical care for my arms, and showed my captors the increasingly dramatic bruises developing on my hand and arm. Most asked me to make a fist. “See, it's just a bruise. You wouldn't be able to make a fist if you had a fracture.” And I told them deliberately graphic details about the sexual assault. Eyes would twitch and look away. No one wanted to hear.

I'll be damned if I carry this alone, I thought. And so I went on and on, until finally they heard, and one of them yelled out: “Our society has a sickness. Those riot police conscripts who assaulted you, do you know what we've done for them? We've lifted them out of their villages, scrubbed them clean and opened a tiny door in their minds.” “That's exactly why we're having a revolution,” I responded. “No one should have to live like that. Who created that misery they live in that you ‘rescued' them from?” I also let it be known that I was a U.S. citizen, and asked for a consular representative to be called. I knew that, as an Egyptian-American (I moved to the U.S. in 2000), I would be spared many horrors that countless unnamed Egyptians suffer. But I also anticipated the flip side. “Aren't you proud of being Egyptian? Do you want to renounce your citizenship,” the military intelligence officer asked me. Blindfolded, bone-tired and in agony from my fractures, I replied: “If your fellow Egyptians break your arms and sexually assault you, you'd want someone in the room you can trust.”

Last week's images from Egypt of the woman stripped down to her underwear and beaten have further unmasked the brutality of the Supreme Council of the Armed Forces (SCAF), the military junta that runs Egypt and which must be tried with crimes against the Egyptian people. I'm unable to look at any of those images of beatings because I feel the nightsticks fracturing my arms all over again. If I hadn't got up when I fell, they would have stomped on me as they stomped on that woman.

I spent the first two weeks back in New York on a painkiller high. It numbed the pain, as well as my ability to write. Once a week, I see a psychologist who specialises in trauma; an orthopaedic surgeon has operated on my left arm to realign the ulnar shaft and fix it in place with a titanium plate and screws, and I have regular physiotherapy. But this week's massive women's march in Tahrir has sharpened my focus once again. When a woman who took part wrote to tell me I'd helped to inspire the march because I'd spoken out on Egyptian TV about my beating and assault, I was finally able to cry. They were the tears of a survivor.

The Mubarak regime used systematic sexual violence against female activists and journalists, and here's the SCAF upholding that ignoble legacy. But to quote the women in Tahrir this week: “The women of Egypt are a red line.” My body, and mind, belong to me. That's the gem at the heart of the revolution. And until I return to Egypt in January, healed once again, I will tell that to the SCAF over and over.