Maryam Siddiqui is the New Inspiration of India 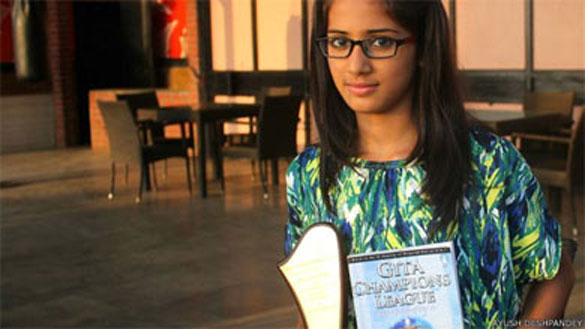 Reading this news welled up my eyes, what a beautiful news it is for this Monday. Maryam Siddiqui becomes a role model for generations of children to come not only in India, but across the world.  What an inspiration she is!

I have added three three YouTube videos – absolutely inspirational! She is the kind of role model we need for our kids.  The interviews were conducted in Hindi/Urdu language she and her parents talk about the inclusive language that I grew up with? Please note, I hope to spend time in understanding Maryam and work on getting it translated into English. She is worth spending the time!

She is blessed to have great parents! Indeed, she inspires me to know that more and more and more Muslims parents have raised their kids to be pluralistic. I cannot thank enough to my parents for giving me and my family similar education – to respect the otherness of others, all of us are God’s creation and respecting each one amounts to respecting God.  My Parents never ever said one negative thing about Hindus, Christians, Jains and others in our town.  Even during communal riots, my father said, it was between two idiotic individuals that flared up into communal thing, he never let us believe that religion is the problem, he said problems always starts with individuals so do the solutions. He was clear for us not to be prejudiced towards any one.

I thank my Mom and Dad for that education, and thank Maryam and her parents for assuring me that, that is how parents should raise their children. Now, I ask you, if  you were raised with similar values, that is no prejudice towards other people, please share it in one powerful short sentence to be included as your quote in the article I am compiling. We have to encourage what is good and multiply it.

No doubt, there are parents, who poison their kids,  and mess up the lives of their children with ill-will and hatred for others. To those men and women who are biased towards the others, please wake up, and don’t pass that on to your children. Don’t mess with their future, and don’t make them unfits to live in a pluralistic society. Very soon, you will find people of different faiths, cultures, ethnicities, races, nationalities and social backgrounds working, eating, playing, marrying, and doing things together. Prepare them for it, rather than poison them and make their life difficult, you may have lived with fear and hate, but don't give them the same...

Bill Gates is the first known human being in the last 100 years to encourage other wealthy individuals to invest their monies in human development – education, eradication of diseases and skills to support themselves.  What was he going to do with his Billions? Then Warren Buffet and others followed the suit.  It is good to see the fruit of your contribution while you’re alive, than leaving it for others to decide what to be done with it. If you got the money, donate it to causes that bring people together for building safer and securer communities than divisive elements that create anxieties for all, and do it while you are alive.

Malala is another first teen to set the example to consider the whole world as her family, a concept embedded in all religious teachings and now Maryam!  There are many more like them, if you know some one, put them on the pedestal, it is your responsibility to do that.

This is what she said, "I, however, have the means to lead a reasonable life because the Almighty has been kind to my parents. But there are many children who are not as lucky as me. So, I have decided to return the cash award to the state government so that it can be used for the betterment of children in need," she said.

Here is the full story:

By kracktivist in Human Rights

Drawing inspiration from Nobel laureate Malala Yousafzai for pursuing the cause of education for all, a 12-year-old Muslim girl Maryam Siddiqui who was on Saturday given Rs 11 lakh by UP chief minister Akhilesh Yadav for winning the Gita Champions League has returned the award.She wants the state gov ernment to use the money for the “betterment of children in need“. Maryam had won the Gita Champions League contest organised by International Society for Krishna Consciousness (Iskcon) in January in which over 3,000 students had participated. Akhilesh felicitated her on Saturday at an official function in Lucknow, where he gave her the cash award and a plaque.

In a grand gesture unusual for a 12-year-old, Maryam also contributed two cheques of Rs 11,000 each to the Chief Minister’s Relief Fund and said she would like to see the funds being used for educating orphaned and needy children in the state.

Calling herself an ambassador of peace, Maryam told TOI she is now on a mission to promote the cause of education for the poor.“Education is the only route to change their destiny ,“ she said. “I’m grateful to the UP government for conferring this honour on me. I, however, have the means to lead a reasonable life because the Almighty has been kind to my parents. But there are many children who are not as lucky as me. So, I have decided to return the cash award to the state government so that it can be used for the betterment of children in need,“ she said.

Maryam’s father Asif Siddiqui confirmed that they had submitted an official letter to the Uttar Pradesh government requesting them to use her cash award for educating children, instead.

Good interviews – Pluralism is in their hearts.

Now, I ask you, if  you were raised with similar values, that is no prejudice towards other people, please share it in one powerful short sentence to be included as your quote in the article I am compiling. We have to encourage what is good and multiply it. Send to MikeGhouse@gmail.com

Mike Ghouse is a public speaker, thinker, writer and a commentator on Pluralism,Islam, India, Israel-Palestine, Politics and other issues of the day. He is a human rights activist, and his book standing up for others will be out soon | He is producing a full feature film " Sacred" to be released on 9/11 and a documentary "Americans together" for a July 4 release.  He is a frequent guest commentator on Fox News and syndicated Talk Radio shows and a writer at major news papers including Dallas Morning News and Huffington Post. All about him is listed in 63 links at www.MikeGhouse.net and his writings are at www.TheGhousediary.com - Mike is committed to building cohesive societies and offers pluralistic solutions on issues of the day.