As international headlines for much of this month focused on the attack on 14-year-old activist Malala Yousafzai by the Taliban, what generally went unnoticed was the outrageous plight of more than a dozen young girls in Pakistan. 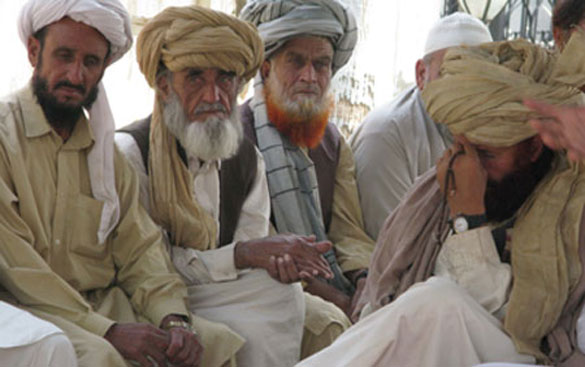 Feuds between battling tribes are settled through "Jirgas", or assemblies of elders [AP]

Last month, a blood feud between two battling tribes in the Dera Bugti district of Balochistan province was settled by a tribal "Jirga" (assembly of elders) that decided to hand over as many as 13 young girls in "vani" - an age-old tribal custom that gives females in marriage to males of another tribal group to settle a dispute.

The punishment was handed down by the Jirga allegedly presided over by a member of the Balochistan provincial assembly, Mir Tariq Masoori Bugti. Members of the legislator's clan, however, denied that he had chaired the Jirga, saying he was in Multan at the time.

On October 9, the Supreme Court took notice of media reports on the issue and summoned Mir Tariq as well as the deputy commissioner of Dera Bugti to explain the facts of the case.

"Mir Tariq absolutely did chair that Jirga; you can ask anyone in the Dera Bugti area," Ghulam Nabi Shahani, an elder of the rival Shahani Masoori tribe, said. "He was in attendance for two hours, and his brothers also joined proceedings later."

Nabi also alleged that Mir Tariq's guards held a man from his tribe hostage till all 13 girls were handed over along with a Rs3 million (about $30,000) fine.

Child marriage - known as "swara" in Khyber-Pakhtunkhwa province, "vani" in Punjab, "sang chati" in Sindh, and "vani" and "lajai" in Balochistan - are enacted in disturbingly large swathes of Pakistan and reinforced by customs that treat women as commodities.

Despite the fact that Pakistan is a signatory to the UN Convention on the Rights of Children, which refers to early marriage as the marriage of people less than 18 years of age, 30 per cent of all marriages in the country fall in the category of child marriages, according to the Rahnuma-Family Planning Association of Pakistan.

"These young girls can be subject to rape while still minors," said Samar Minallah, a human rights activist who in 2004 filed a petition in the Supreme Court against the handing over of women as compensation to settle disputes. While Minallah's petition is still being heard, the vani of at least 70 girls has been blocked by the court since.

At a gathering of women parliamentarians and child marriage survivors organised by a local NGO, 15-year-old Shagufta, from Khyber-Pakhtunkhwa's capital city of Peshwar, revealed that she was forcibly married at 10 to a boy of the same age. "It seemed like they just wanted a domestic servant," she said.

Rukhsana, also from Khyber-Pakhtunkhwa province, was 11 when she was married to a 20-year-old man. "On the first night, my mother-in-law forced me to spend the night with my father-in-law and said this was their custom," she recounted.

"Nowhere does Islam say it is okay to treat women like commodities instead of human beings," Gilani said.

Formally, these marriages are prohibited in Pakistan under the Child Marriages Restraint Act, 1929, which punishes offenders with one-month imprisonment and/or a fine of Rs1000 (approximately $12).

But the law, according to many observers, is incomplete and hard to implement.

"Conviction under this law does not serve to nullify the marriage, nor is child marriage a cognisable offence, which means that the police cannot intervene directly," Usma Tahir, a policy manager at Action Aid Pakistan, said.

Government officials are often quick to trot out a list of fresh pro-women legislation enacted by the Pakistan People's Party-led coalition government in the last four and a half years.

However, many who hail from areas where vani and other crimes against women are prevalent remain sceptical that the new legislations will change anything.

"All these laws will mean nothing as long as parallel systems of governance and administration are in place," former deputy speaker of the National Assembly Sardar Wazir Jogezai said. "As things stand now, half the problems here are solved through Jirgas and the rest through constitutional laws and electoral politics. This confusion only leads to more problems."

Explaining the recent vani case in Dera Bugti, Jogazai said the problem arose because Mir Tariq, who allegedly chaired the Jirga that delivered the extraordinary punishment, was both a parliamentarian and a tribal head. "When you have to balance the demands of justice, the tribe and your voters, justice will inevitably take the back seat."

Meanwhile, officials in the federal government say they are unable to fully enforce laws in the provinces after a recent amendment to the constitution placed women's rights under the jurisdiction of provincial leadership.

"It is now for the provinces to make comprehensive legislation and implement them to protect women from harmful traditional practices," Gilani explained.

Other rights activists believe that vanis cannot be ended until the system of governance in provinces like Balochistan and Khyber Pakhtunkhwa is overhauled.

While the Sardari (feudal) system in Balochistan was abolished in the early sixties, successive governments have failed to effectively implement the ban due to entrenched resistance from the feudal class.

A Quetta-based journalist speaking on the condition of anonymity explained: "The sardars have so much power they can still order people to walk on fire to prove their innocence and hand over women to solve feuds."

On the other hand, there is also growing consensus that state security agencies are responsible for the sorry state of affairs in Balochistan and Khyber Pakhtunkhwa.

"All authority in the provinces is vested in the security forces, which enjoy complete impunity. There is a political government in these areas in name only," I A Rehman, the general secretary of the Human Rights Commission of Pakistan, said.

"Giving away a daughter in marriage is one less mouth at home to feed," explained Minallah. "In most cases, practices like vani involve the daughters of illiterate and poor people who don't have money or other assets to give as compensation."

While rolling back the system of governance and entrenched norms in these areas of Pakistan will be difficult, rights activists suggest the situation is not beyond repair.

"We've seen new legislation in the recent past, now the next step is working with law enforcement agencies," said Anis Haroon, Chairperson of the National Commission on the Status of Women, a statutory body that also acts as a watchdog body to ensure implementation of laws. "Police and other law enforcement have to be sensitised to the issues involved. Making them aware of what the law says is key."

"Evidence shows that the more education a girl receives, the less likely she is to marry as a child, so improving access to education for both girls and boys and eliminating gender gaps in education are also important in ending child marriages and practices like vani," Haroon added.

Khawar Mumtaz, renowned Pakistani development activist who runs Shirkat Ghah, a leading women resource centre, also believes that as cases of vani and other types of violence against women are highlighted by the media and civil society, people's behaviour and mind-sets are already beginning to change. "As the debate opens up and discussions intensify, the right amount of moral pressure will be created to end these practices. It is already happening," Mumtaz said.

Minallah is also hopeful: "The fact that Mir Tariq is vehemently denying that he chaired the recent Jirga is itself a signal: that he knows he has done something wrong, which will in turn send a message to other tribal people that this practice is unacceptable and unrepeatable."

In the words of Baloch leader Wazir Jogazai: "Vani may have been tradition once, but no one can claim today that it is anything but a crime."