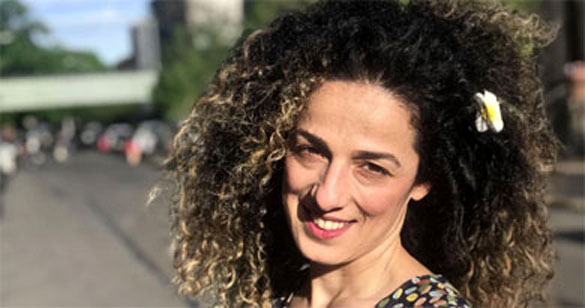 On Friday, my sister publicly disowned me on prime-time Iranian television.

I can’t say this comes out of nowhere. Over the past two decades — as a journalist critical of the regime, as an outspoken feminist and ultimately a dissident living in exile in America — the Islamic Republic has tried to intimidate me and my family, which still lives in the poor village where I was raised in northern Iran.

As a journalist in Iran, I often got into trouble exposing the regime’s mismanagement and corruption until, eventually, my press pass was revoked. I was often threatened with arrest or worse for writing articles critical of former President Mahmoud Ahmadinejad. Ultimately, I was forced to flee my homeland in 2009.

But the threats I faced as a journalist were nothing compared to the abuse and attacks that began after I began My Stealthy Freedom in 2014, a campaign against Iran’s compulsory hijab laws.

I have remained out of reach of the regime, but my family has taken the brunt. There has been financial pressure: threats to revoke business permits and licenses, for example. Some relatives have been threatened with firing until they proved their loyalty by offering secrets about me. And, of course, the Intelligence Ministry regularly sends officers to pay visits to my elderly parents. At one point they offered to arrange a “family reunion” in Turkey. I can only imagine what they had in mind for me.

But exploiting my family on the Iranian equivalent of “60 Minutes” was a new low. It was by far the most ferocious attempt to shame me, intimidate me and break my spirit. Stalin would have been proud.

Two interviewers, both men, sit facing my older sister and her daughter, my niece. Both are wearing chadors. My sister first makes the case that I am no longer myself — that somehow I’ve been brainwashed into my activism and rejecting compulsory hijab.

“She knows what she’s doing isn’t right. But I feel she’s no longer herself. If this was really her, then why are her eyes always teary? Why isn’t she happy?” my sister asks rhetorically. She goes on to say that I’ve “achieved nothing.” If I “had talent, she’d be able to persuade my daughters and me.”

I’ve always respected my sister. I’ve never tried to put pressure on her or on any members of my family. I want women to have autonomy over their bodies, to be free to wear — or not wear — a head covering.

More pain was to follow. In one of several leading questions, one of the interviewers asks my sister and my niece: “What happened that you decided to publicly disown her?”

Even as she was denouncing me and praising the regime, I felt sympathy for my sister. As I watched her, I thought about the reality of life for women and girls in the Islamic Republic: They face the very shaming I was being subjected to if they publicly oppose compulsory hijab.

Ayatollah Ali Khamenei, who has the final say over almost everything in Iran, including what airs on television has previously dismissed the civil disobedience campaign against compulsory hijab as “insignificant.” But this vile segment demonstrates that he’s apparently changed his mind about the significance of our campaign. What’s more, the fact that state TV is focused on my hair while ignoring the real story — the fact that Iranians lack basic necessities, like water and electricity — makes it even more stomach-turning.

In perhaps the most heartbreaking exchange of the segment, the interviewers push my sister to say that my parents had disowned me.

“They can’t believe Masih is walking around naked in the streets,” she says of my parents.

The interviewer presses her: “Have your parents disowned Masih?”

Her reply: “She’s broken their hearts.”

Hearing this made me almost physically ill.

The truth is that before the show aired, I got a call from my mother — a tiny, illiterate woman who has the toughness that comes from being abandoned at an early age by her own mother and married off at 14 years old. She was sobbing. The intelligence service had tried to pressure her and my father to participate in the show. And the local Friday prayer leader had called them out in public and urged them to cooperate. She refused — a show of loyalty that I can never repay.

In the interview, my sister and niece declare that they will “fight me.” Likewise, I am engaged in the fight of my life.

When I think about who I am fighting for, all I need to do is watch the final moments of the show, in which my great-nieces, 4 and 6 years old, are paraded in front of the cameras wearing chadors.

Seeing them takes me back to the time in my life when I was forced to cover my hair, when I was told that my own body was shameful and when I was almost punched in a parliamentary corridor by a cleric because two strands of hair were peeking out from under my head scarf.

What the regime is doing to my family hurts me deeply. But in the long run these personal attacks have always strengthened me and the Iranian feminists who are my chosen family.

“I am prepared to give up my life for hijab,” my beloved sister says.

I, too, would give up my life. I’d give it up for women like her to live in freedom.

Masih Alinejad is the founder of My Stealthy Freedom and the author of “The Wind in My Hair: My Fight for Freedom in Modern Iran.”