By Manuel Langendorf and Ashley Lohmann

After playing a major role in the Arab Spring and other regional reform movements, women are still fighting to ensure their rights and improve their societal status in the Middle East and North Africa.

As we witness a pattern of sexual violence against women in the Middle East and North Africa (MENA), especially in Egypt, it is pivotal to assess whether the Arab Spring has brought real change for women in the region. Is the violence a symbol of the region's failure to advance women's rights? Women played a crucial role in uprisings across the region and hoped that their efforts would ultimately improve their social, political, and economic standing. 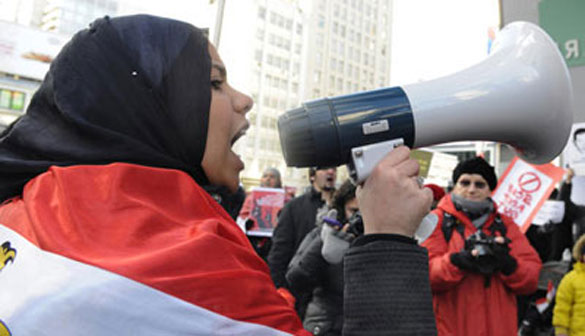 Tahrir Square, at the height of the 2011 protests, not only symbolized the struggle against autocracy in the MENA region but also a glimmer of hope for a more equitable society, as men and women protested together for weeks. Hundreds of women slept in the square during the Egyptian revolution to preempt a takeover by regime forces.

In Yemen, women were active participants in the protests against former President Ali Abdullah Saleh. Female Yemeni journalist and activist, Tawakkol Karman, became one of the faces of the Arab Spring and received the Nobel Peace Prize in 2011.

At the start of the Syrian uprising, women actively organized protests, provided basic supplies to affected families, and spoke out against the regime. Women in Tunisia joined male protesters in efforts to oust long-standing ruler Zine El-Abidine Ben Ali. Equally, women were also victims of the former regime's crackdown.

Apart from the general demands for a more inclusive political society and enhanced socioeconomic justice, female protesters in many Arab countries, where gender inequality was a prevailing feature before the uprisings, hoped to enhance their status in society. Thus, in the words of Yemeni political activist Afrah Nasser: “I wanted it to be a double revolution; a political one to topple President Saleh and a feminist one to ensure that women have equal rights in what Yemenis hope will be a new Yemen.”

Why are Women’s Rights Relevant?

As countries across the region rebuild themselves, many women have found their expectations unfulfilled, and they fear that the newly-formed governments will fail to address or will limit women’s rights. Female political participation has improved in some countries, but many women insist that their political and economic status has remained unchanged or has worsened.

Female parliamentary candidates have participated in the region’s post-uprising elections with mixed success. Women won an unprecedented 32% of parliamentary seats in Algeria, 23% in Tunisia, and 17% in Libya. However, in Egypt, women constituted only 1% of the country’s parliament, which was disbanded in June 2012. Women’s rights groups are now calling for a boycott of the upcoming legislative elections. In Yemen, only one woman holds a seat in the 301-member parliament.

For some women’s rights groups, more concerning is the lack of women in powerful decision-making positions. In Egypt, Tunisia, and Libya, only two women have been appointed to each country’s cabinet, and three women to Yemen’s. The Syrian National Council, the country's opposition to President Bashar al-Assad, failed to promote any women to its decision-making body last November.

Despite disappointment regarding political representation, few issues have provoked as much outrage as the region’s new constitutions. As each country establishes its legal foundations, many women worry that the rise of Islamist-majority governments will negatively impact their rights. In Tunisia, female protesters demonstrated against a clause in a draft constitution referring to women as “complementary” to men, rather than equal. The clause was ultimately dropped.

Egyptian women’s rights groups continue to oppose the country’s recently-ratified constitution, which fails to establish the minimum age for marriage or ban human trafficking, and guarantees gender equality only if it does not conflict with Shari’a (Islamic law). Many also worry that the Islamist-dominated Constituent Assembly intentionally worded the document vaguely, which could allow for interpretations that limit women’s rights.

In addition to women’s political standing, concerns remain about their economic and social status. Female workforce participation in the MENA region remains the lowest in the world. In Yemen, four out of five women in a 2012 Oxfam survey indicated that their circumstances had worsened since the revolution.

The increase in violence against women in Egypt led the United Nations to issue a statement expressing “deep concern.” Rights groups continue to protest the government’s failure to protect women, but so far, the only response has been a public statement from the Shura Council blaming the female victims for the attacks.

Despite the bleak outlook, many women are continuing to fight for their rights by campaigning, protesting, reporting, and forming rights groups. Even in countries that have not experienced revolutions, women are speaking out - including in Saudi Arabia, where women defied the driving ban last year, and Iran where women have joined protests against the regime in 2009. It seems that the region-wide climate of change and reform has given the women's rights movement renewed energy.