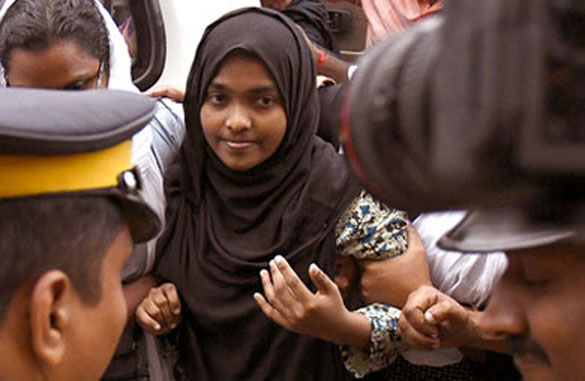 Voluminous commentary has surrounded the case of Hadiya/Akhila, the homoeopathy student who embraced Islam, and thereafter married a Muslim man. The Kerala High Court annulled Hadiya’s marriage and subsequently, the Supreme Court ordered the National Investigative Agency (NIA) to enquire into the issues arising from the writ petition moved by her husband. It is remarkable that the SC responded not to the aggrieved petitioner who sought restitution of his marriage, but instead sought to address the fears of the girl’s father on whose plea the marriage had been dissolved in the first place.

Critics have argued that by ordering the annulment of marriage, the court has legitimised the love jihad propaganda. Feminists have also noted the gross infantilisation of Hadiya, the erosion of her agency and the silencing of her voice by the heavy hand of patriarchy. Certainly, in voiding the marriage and granting Haidya’s custody to her father, the high court assumed the mantle of parens patriae. Her vociferous denial of the charges of force was dismissed with assertions about her mediocre intelligence, young age and incapacity to think independently. Nonetheless, this infantilisation is not merely symptomatic of the state’s relationship with its female citizenry. It draws upon the long history of the post-colonial state’s attitude to religious conversion.

Though Article 25 granted the freedom to practise and propagate one’s religion, conversion was always looked upon with suspicion and as an attempt to sunder the Hindu community by preying on the weak. Whilst attempts to pass a central law to prohibit conversion failed thrice, Odisha (then Orissa) and Madhya Pradesh enacted anti-conversion laws very early. These laws were cast in the language of vulnerability and weakness, and criminalised conversion by force, fraud or allurement. Under the Odisha and MP acts, the punishment would be doubled if those converted were minors, women, or belonged to Scheduled Castes and Scheduled Tribes.

The inherent paternalism of these acts has been upheld by the court rulings when these laws were challenged. The Supreme Court’s ruling in Stainislaus interpreted freedom of conscience to be the right to be not influenced or even exposed to persuasion by the followers of another faith. Pratap Bhanu Mehta’s argument that to the state and law, religious speech appears to be a site of “passion and unreason”, which stultifies the listeners and renders them susceptible, zombie-like, to allurements, inducement and force, applies well here.

The Kerala government pleader stated in the court said that Hadiya was “influenced by feeding her with graphic details of hell and the torments that sinners are subjected to in their life after death. She has also been made to believe that in order to escape from the torments of hell, acceptance of the Islamic faith was the only way.” A police report said, “Akhila believed that Islam would help her reach heaven after earth”. Under the sundry freedom of religion laws, these would comprise as certain proof of conversion by fraud. Though there is no such law in force in Kerala, this judgment falls in the legal universe where law can construe anything more than “exposition of tenets” as a crime and the courts feel compelled to protect those so enfeebled by religious propaganda. In Yulitha Hyde, the Odisha High Court observed: “Threat of divine displeasure numbs the mental faculty; more so of an undeveloped mind.” Hadiya’s judicial infantilisation is better located within this history.

The Kerala HC admits that there have been many cases of marriages across religious divides but the courts have had no trouble accepting them. What stumps the court is not that Hadiya converted to Islam for love — for that would be understandable as a purely utilitarian choice — but out of piety. It clings to the only frame available to comprehend Islamic piety — radicalisation and extremism. Its “inquisitive mind” worries if any radical organisations have been behind her interest in Islam; it censures the police for not investigating two people Hadiya was in touch with despite “clear indications that the said persons are persons involved in the study of Muslim religion”. The husband’s Facebook posts “unmistakably show his radical inclination”, according to the court.

His past links with the SDPI (not banned, but regularly referred to as being connected to the banned SIMI), his employment in West Asia, an old criminal case arising out a dispute with a rival youth organisation and the arrest of a former SDPI member by the NIA though unconnected to him, summon all the tropes familiar to us in terror cases: Vagueness of charges, nebulous conspiracies, criminalisation for political affiliations or just simply public expression of faith. It is interesting that Hadiya’s father’s first habeas corpus petition alleging that she was in the illegal custody of her friends and their fathers was dismissed. A second petition claiming that she would be transported to Syria to join ISIS by extremist organisations that had forcibly converted her was treated more favourably.

The Supreme Court has ordered the country’s premier anti-terror agency, NIA, to unearth the “truth”. The apex court may or may not overrule the high court but its choice of the agency tells us the extent to which a woman’s turn to Islam can only be interpreted in the legal matrix of terrorism.