The Lives and Times of Kashmir’s Women Scientists

Hina Fayaz Bhat, 31, is currently an assistant professor and junior scientist in the biotechnology division, Sher-e-Kashmir University of Agricultural Sciences and Technology of Kashmir (SKUAST), Srinagar. In 2013, she was the first woman scientist from the state to qualify for the Department of Science and Technology’s (DST’s) INSPIRE faculty award in the biomedical sciences category. It allowed her to work at SKUAST before she could as a permanent faculty member in 2014.

She teaches at the SKUAST’s veterinary faculty and advises graduate and doctoral candidates, in addition to her research projects. Bhat is also the principal investigator of two national research projects and a co-principle investigator of an agricultural project with a budget of over Rs 3 Crore. She also heads a proteomics lab at her division, funded by the Science and Engineering Research Board (SERB), for conducting training programs and workshops for young researchers in the field. 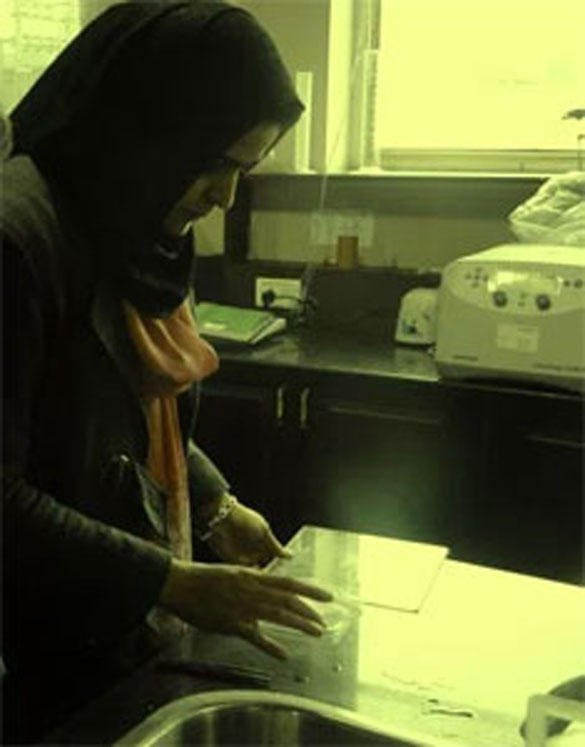 Hina Bhat at work in her lab at SKUAST. Source: Author provided

“My primary research area is focused on cancer signal transduction,” she explained. “I have also been working on elucidating the proteomics of some local luxury fibres like Pashmina, and finding novel utility for some of the low quality animal fibres.” These fibres are typically considered to be waste products but Bhat wants to repurpose them into materials with prospective biomedical importance. Apart from helping Jammu and Kashmir, she claims such work will also help place more information in the public domain “as almost no data is available about the rare and economically important fibres” of the state.

Her primary research interest lies at the intersection of cancer biology, fibre proteomics and molecular biology. “I am interested in understanding the differences in the signalling pathways between cancer and normal cells, and study cancer cell invasion and migratory properties,” she said.

Both her interests are relevant to Kashmir; Bhat said the current surge in the number of cancer patients in the valley is a tragedy. “The disease needs to be studied thoroughly in the patients as it varies” from one section of the population to another. “The major challenge in cancer therapy is to inhibit the spreading of tumour cells from primary tumour sites to those particular organs where metastases are likely to occur,” she explained. “The aim of our work is to develop a strategy for understanding this spreading process and screening drugs with anti-migratory potential to investigate their effect on cancer cells.”

Working in Kashmir hasn’t been easy for Bhat. “There are times when even reaching the workplace seems like a project in itself,” she said. She recalled how difficult it had been in the summer of 2010, when she had been doing her PhD while the state witnessed a large uprising. Her experiments would take longer to finish and reaching home on time was difficult. “Being a woman adds to this misery. To work in these circumstances as we are facing here – it’s been a challenge to keep my lab functional.”

Although workplaces in the state have become more conducive to the presence of women, according to Bhat, “there still is this cognitive bias towards working women.” Casual remarks like “Yim Ladies Kya Chei Karaan? Kiheen!” (‘What do these ladies do? Nothing!’) can still be heard around offices. Nonetheless, she plans to continue working on her current projects and also collaborate with medical colleges and hospitals in the future.

For female students, she says, there are many women-oriented programmes, scholarships and fellowships that could be used to make a career in science. “The only thing you need is a strong will and an urge to work hard. In science you can’t expect early outcomes as in other fields but if you keep working hard, you’ll get success.” 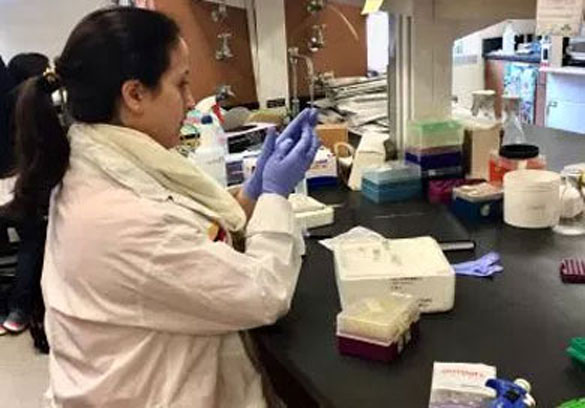 Sahar Saleem, 31, was attracted to science when she was in school. She says she was lucky to have been taught by a few good science teachers who kept their students occupied with classwork and lessons, and plenty of questions that made her, and kept her, curious.

After high school, Saleem studied biochemistry at the Women’s College, Srinagar, followed by a master’s in biotechnology and a PhD, both from Kashmir University. Once she was done in 2016, she applied for the DST-INSPIRE faculty position. In February 2017, she heard back that she’d been the only candidate selected from Jammu and Kashmir state in the biomedical sciences category. From December 2016 to April 2017, Saleem worked as a researcher at Washington State University’s in the department of molecular sciences, before joining SKUAST as a DST-INSPIRE faculty.

In SKUAST, she is working on setting up a lab (as required by the INSPIRE grant). Saleem works on cancer signalling and therapeutics. “We try to investigate what changes take place in the internal machinery of a normal cell that changes it to a cancerous cell,” she explained. Specifically, she and her colleagues investigate changes that take place in certain protein signalling pathways in breast cancer cells and how these changes lead to the development of malignant tumours. “When we elucidate the role of certain proteins in the development of malignancies and understand their role, better drugs can be developed to cure the disease,” she said.

Saleem has more than 11 publications in international journals and two book chapters to her credit. 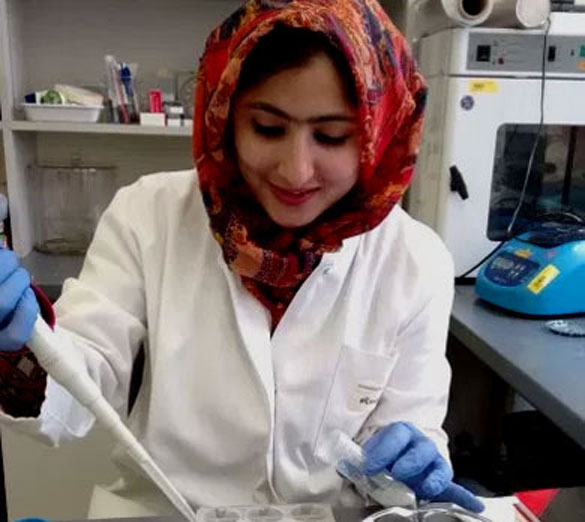 Last year, Munazah Fazal Qureshi, 32, a resident of Soura, Srinagar, submitted her PhD at the school of life sciences at the Jawaharlal Nehru University (JNU), New Delhi. Her research was on behavioural and molecular neurobiology, and involved studying how sleep helps memories form and what the molecular mechanisms underlying it could be.

After getting a master’s in biotechnology from the University of Kashmir in 2008, she joined the same department for her M.Phil. However, domestic problems forced her to stay at home for four months. “Eventually I had to leave the course,” she says.  It was very discouraging and she felt her career had come to an end. But with support and encouragement from her family, she started looking for PhD programmes again and applied to different universities outside Kashmir.

In 2010, she made it to JNU’s school of life sciences for her PhD. Qureshi won the Budur Krishna Murthy Travel Award by the Indian Society for Sleep Research and a Young Scientists Colloquium for the best oral presentation, both in 2014. In 2015, the University of Würzburg awarded her a fellowship that allowed her to work at the institution for three months.

At the moment, Qureshi is looking for postdoc research opportunities. She would like to eventually return home to work as a researcher and teacher. In Kashmir, she said, nurturing the scientific temper is a challenge in the the middle of such turmoil. “It is not always possible to give what we are capable of and stand at par with other states,” she said. To her, limited working hours is the biggest drawback in Kashmir when it comes to undertaking scientific work. “Outside Kashmir, even the girls can work late hours in labs and institutions. In Kashmir, you can’t stretch work hours beyond 5 pm. This limits the output of our bright researchers and we get a little sluggish, too.”

To young female science graduates and PhD aspirants from Kashmir, Qureshi says dream big and think outside the box. “Have faith in your strength and yourself. Everyone has got two hands to work with, and we are no less than anyone….” 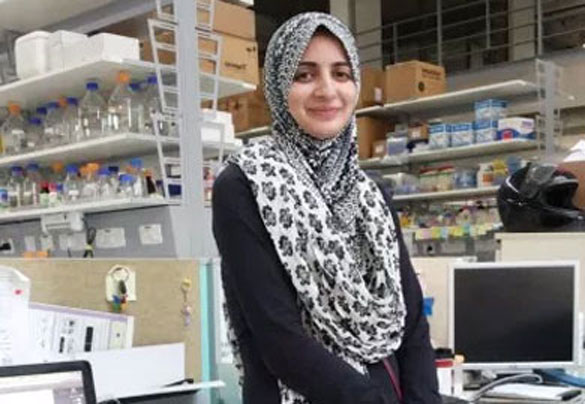 Durafshan Sakeena Syed, 32, had always been intrigued by science. She got a master’s degree in biotechnology from Kashmir University in 2008. Her professors had encouraged her to leave her comfort zone and different areas of study. Soon after, she joined Veronica Rodrigues’s laboratory at the National Centre for Biological Sciences (NCBS), Bengaluru, as a junior research fellow, where she was introduced to neurobiology.

Syed appeared for the national-level entrance examination for the PhD programme at NCBS and the Indian Institute of Science, Bengaluru. She made it to both but finally chose K. Vijay Raghavan’s lab at NCBS in August 2009. There, she studied mechanisms underlying the development of motor neurons required for walking, using the fruit fly as a model. The rhythmic motion of walking is the precisely coordinated outcome of a mesh of neurons and muscles in the leg.

“We discovered the signalling mechanisms that direct the precise positioning of motor neurons in the central nervous system and their connections with specific leg muscles, thus enabling an organism to perform regulated movements,” Syed said. She is now a postdoctoral fellow in Julie Simpson’s lab at the University of California, Santa Barbara, studying how the brain regulates choice among actions and generates sequential movements.

She believes science graduates and postgraduates aren’t exposed to enough research in Kashmir. “Universities in Kashmir should encourage students to do six-month dissertation projects in various research institutes so they learn the basics of research,” she said. “It also helps develop connections that provide an opportunity to pursue PhD in India or abroad, or how to develop collaborations while doing a PhD in Kashmir University.”

She asks the state’s younger scientific minds to “stand up on your own by dint of your hard work, look for various research opportunities outside the state, and don’t always wait for help… Learn to do it yourself.”

Majid Maqbool is a journalist and editor based in Srinagar, Kashmir