Thanks To This Afghan Woman, 6,000 Imams Have Taken Gender-Sensitivity Training 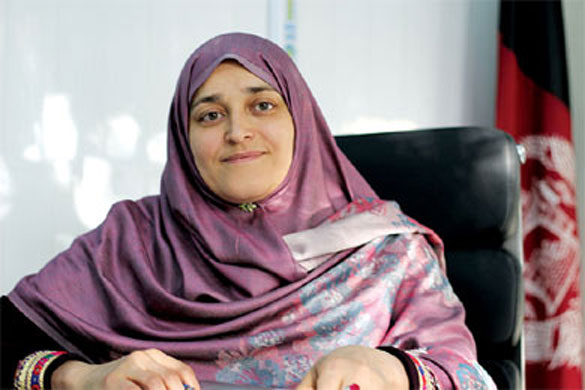 Jamila Afghani, who has battled discrimination since childhood, uses Islam to empower women in Afghanistan. She is committed to continuing the work despite threats and other obstacles.

It is Friday noon in Kabul, Afghanistan, and men dressed in traditional clothes hurry to mosques to pray in congregation. Friday prayers are usually men’s business, and during the Taliban rule in the 1990s, women were not allowed in mosques. But in one neighborhood in the city, an imam has kept the doors of his mosque open to women for 12 years now. He often preaches about women’s rights in Islam – that women are equal to men and have the right to work and study.

This is all because of a woman named Jamila Afghani and the gender-sensitivity training program she has created.

Ms. Afghani has a friendly smile that hides all that she has had to endure in life. A women’s rights activist and Islamic scholar in Afghanistan, she has battled discrimination, as well as disability, since childhood. But it was access to education and being able to read the Quran herself that made her realize Islam could be used to empower women in Afghanistan.

Today, according to Afghani, about 20 percent of Kabul’s mosques have special prayer areas for women, whereas only 15 years ago there were none. The sermons delivered by imams about the importance of education have also helped many women persuade their families to let them study. In fact, some 6,000 imams in Afghanistan have participated in Afghani’s training program.

Afghani was born in Kabul in 1974, a few years before the Soviet invasion of the country. When she was only a few months old, she contracted polio, which left one of her legs disabled. But for Afghani the disability became a blessing in disguise. Her family was conservative and did not approve of education for girls. Her sisters played outside, but Afghani was not able to; she became easily bored and spent her days crying. Finally, at the suggestion of her doctor, her father enrolled her in first grade.

“I became very happy. When I got to school, it was my whole world,” she says.

Afghani was in fifth grade when the fighting between the mujahideen and the Soviet Union became so fierce that her family left Afghanistan for Pakistan. In Peshawar, she enrolled in master’s-level classes in Islamic studies and began learning Arabic. Once there, she came to see an Islam that was not what she had been familiar with.

“When I started learning Arabic and studying by myself, I found out that Islam is totally different from what my family was saying, what my environment was teaching,” she says.

“Everything was always a discrimination in our family,” says Afghani, who observed how her brothers behaved with their wives. “They were educated women, but my brothers stopped them from continuing their education and working,” she recounts. “I thought, if [my brothers] can go outside, why not my sisters-in-law?”

Gradually, Afghani got involved with an Afghan women’s rights group in Peshawar. And over time, she formed her own organization, later named the Noor Educational and Capacity Development Organization (NECDO). She decided to take an Islamic approach, which made it possible for her to teach literacy classes for women in refugee camps. “It was not easy to enter into those communities,” she explains. “But when we used Islamic education as an entry point, we had a very good experience.”

After 2001, when the Taliban were ousted from power in Afghanistan, scores of refugees started returning to the country, Afghani among them. She began setting up women’s centers where literacy was taught.

But when the project was taken to Afghani’s native Ghazni province, she ran into problems with the community – especially the imams of the mosques. She decided to invite one of the imams to her center, but he was embarrassed to meet a woman and said he wished nobody would find out. Afghani couldn’t believe his attitude: “I thought, my God, what is this?” But she chose to take a respectful approach and explained that she was educating women about Islam. “I said, ‘If you can find a single verse from the Quran or the hadith that education is bad, then I’ll stop right now and hand over the key of this center to you.’ ”

Slowly, she says, the imam became impressed with Afghani’s knowledge of Islam, and he started encouraging men to let their wives and daughters go to the center. Suddenly, the space was crowded with women hungry for education.

In 2008, Afghani was invited to a conference in Malaysia organized by the Women’s Islamic Initiative in Spirituality and Equality (WISE), a network for Muslim women. There she learned about a Filipina woman who was writing Friday sermons for imams about women’s rights. This gave Afghani the idea about gender-sensitivity training for imams. With the support of WISE and female Muslim scholars, “we developed a manual for the training,” she says.

Afghani knew the task ahead was not going to be easy. Initially, imams were shown the manual without them knowing it would be used for their own training. Afghani and her colleagues told the imams they wanted input on what they had developed. This is how the discussions began, and suddenly the training was in full swing. “Sometimes women are very clever. More than men,” Afghani laughs.

Some of the imams were immediately receptive to Afghani’s ideas. But with others, some issues proved very difficult. “Women’s political participation was the hardest thing,” she says. “Even ... now, some of the imams are not on the same page as [us].”

Of the 6,000 imams who have been trained by NECDO, one is Mohammed Ehsan Saikal, the imam in Kabul who has kept his mosque open to women for 12 years. He has been working with Afghani during this time and often preaches about the importance of education for girls. “I have three daughters, and all of them are highly educated and go to work,” he says. “The best thing I have received from this organization is enlightenment and awareness.”

Nargis Hamdard, age 20, is a female student at Mr. Saikal’s madrasa, which operates alongside his mosque. Her family used to be against education for women, but since she started coming to the madrasa, their opinion has changed. “I have learned that in Islam, women have the right to work and study. Now my family also believes this,” she says.

Katharina Hild, a former team leader at the German Society for International Cooperation, worked closely with Afghani, training women who served on local councils. According to Ms. Hild, Afghani “knows exactly how to find the best leverage for women’s rights.... Before the project, the women had no clear idea what it means to be a local councilor, but after an intense training program managed by NECDO they were much more confident.”

But going against extremist interpretations of Islam has come at a price. Saikal and others regularly receive threats from the Taliban and the Islamic State group. “Two of our imams were killed, and I have gotten threats and warnings,” Afghani says. Because of this, she has had to limit her movements.

A year ago, Afghani was appointed a deputy minister in the Ministry of Labor, Social Affairs, Martyrs and Disabled. But there is still not enough political will to address women’s issues in the government, she says.

At the same time, she says, the international community does not see the potential in Islam: “They think that working with Islam is a problem. But it’s not true. I think it’s very important, especially in Afghanistan, which is a very conservative country. Islamic knowledge should be used as a tool to convince the people.”

Despite the obstacles and threats, Afghani is committed to continuing her work. “This is our country, and we have to do something better for the next generations. If not me, then who will do it?”

How To Take Action

UniversalGiving helps people give to and volunteer for top-performing charitable organizations around the world. All the projects are vetted by UniversalGiving; 100 percent of each donation goes directly to the listed cause. Below are links to three groups supporting girls:

Plan International USA is part of a global network that works side by side with communities in 50 developing countries to end the cycle of poverty for children. Take action: Help protect girls from sexual exploitation.