In a culture where women have fewer rights and are the main target of 'honour killings', Louisa Peacock interviews the Palestinian woman running Radio Nisaa, the all-female radio station hoping to break down stereotypes by giving local women their say 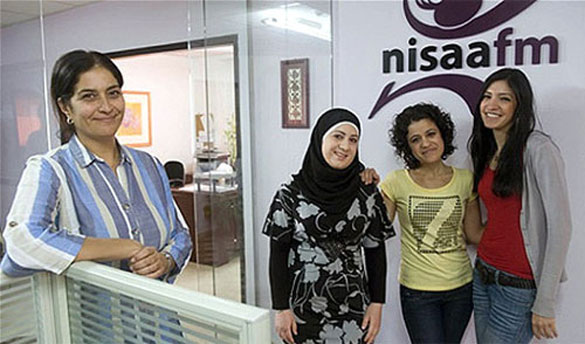 Maysoon Odeh Gangat and the team at Radio Nisaa FM

Should a man help out more in the home? It's the sort of question that even in a modern Britain, could still generate plenty of calls from listeners during a radio phone-in, as women still tend to perform more of the domestic duties than men.

But imagine a world where this question hasn't really been considered before. In fact, take out the 'more' so you're left with: "should a man help out in the home?" and then imagine not having ever dared to ask this at all.

Enter Radio Nisaa FM. It is the first commercial women's radio station in the Middle East, run by women, which gives Palestinian women (and men) a public platform to air their views about all things effecting their lives and lifestyles, in a way that they've never had the chance before. In a patriarchal culture, women suddenly have a voice – and an audience.

The question of whether men should take more responsibility in the home and looking after children may seem perennial – if not a little tired – in the UK, but in the Arab world, it's still largely untouched, explains Radio Nisaa's director Maysoon Odeh Gangat.

She uses her radio station to "break the stereotype of Arab women". Launched in 2009 by Gangat and The Womanity Foundation, a charity, Radio Nisaa caters to women and men across generations and challenges the expectations placed upon them.

But it's not just the light-hearted subjects up for discussion. Recent panel debates have included honour killings, where a member of a family (usually a woman) is murdered by other members of the family; polygamy, which is common in Arab culture; and how to eradicate girls' labour and advance education.

In a culture where women cannot go for a walk in the park on their own, according to Gangat, the discussions that Radio Nisaa tackles are bold, and refreshing.

Under Gangat's direction, the station is managed by 11 staff, eight of whom are women, with all shows presented by female media professionals and reporters. Even the station's name, Nisaa, means "women" in Arabic.

But Gangat is under no illusion that to foster real debate – and real change – men must be included. For women to air their voice and be heard, both men and women must listen.

"The whole point of Radio Nisaa is to change attitudes of men and women in society so that women can have a say on issues that affect them. But we don't want it to be just 'for women'. It wouldn't make sense to take such a militant stance, we want to engage with men and women," she says.

"We are pushing boundaries but also we don't want to perpetuate stereotypes about Arab/ Palestinian culture that all women are oppressed or victims. We are highlighting the success stories of women and we hope to inspire other women to say 'let's show other men' how it can be done."

Radio Nisaa is a project of The Womanity Foundation, a not for profit organisation that funds entrepreneurial projects run by women in developing countries. The foundation was established after research showing that when 10 per cent more girls go to school, a country’s GDP increases on average by 3 per cent. Other figures suggest that when women and girls earn an income, they reinvest 90 per cent of it into their families, whilst men only invest between 30-40 per cent – making the business case for empowering women strong.

Gangat makes sure the radio station, broadcast in Arabic, has a broad range of topics to appeal to both men and women, but with the overall aim of empowering and inspiring women to take ownership of issues that matter to them. And it's working – Radio Nisaa's current listenership is skewed towards men, says Gangat, and based on snap surveys they have conducted with listeners, the majority think the station's influence is positive. Almost one in 10 people living in the Palestinian territories listen to Radio Nisaa, recent polls show.

"We bring experts and guests onto our talk shows that spread the very influential message for women that 'you have rights'," Gangat says.

But in a country where women are still seen as the subordinate sex, anything which questions the patriarchal society and traditions of the Palestinian Territories could attract fierce opposition. With few public platforms catering to women's needs, this type of broadcasting is subject to being under immense scrutiny. So how does Gangat and the team cope with criticism?

Perhaps surprisingly, Gangat tells me she rarely receives any criticism or complaints about what is broadcast, or the nature of the topics talked about. "Of course it's a challenge, but we are very sensitive to the environment we're in. We're trying to create a gradual evolution – [male] taxi drivers, public transport workers – they all listen to us."

Because the station's standpoint comes from one of positivity, of sharing stories to connect, inform, inspire and promote dialogue among women, people in the wider society do not tend to see Radio Nisaa as a "threat", she explains.

"On the subject of honour killings, for example, which is a very challenging one, we use our debate to empower women. We want to see ourselves as helping NGOs, policymakers and activists, we're an engine for making change."

Gangat says she is "of course, against" honour killings. "It's got nothing to do with honour, it's a family dispute where a woman is the victim. Secondly, you can't just take the law and enforce it with your own hands," she says, adding that these are the points her radio programmes will bring out.

She hopes to take Radio Nisaa globally so that women all over the world can listen to an honest and open dialogue on an array of topics, from domestic violence and rape to being in a healthy relationship. Currently the station broadcasts only from the Palestinian Territories, although it is streamed in Afghanistan, Brazil, Morocco, the Middle East and North Africa.

"As a Palestinian, women aren't always victims. Our programmes shed light on the political situation and local restrictions, and it's nice to listen to these topics being debated professionally without bias," Gangat explains.

So why not TV? Or use the power of the web to spread these messages? "Radio permeates in society a lot further than TV. Even very isolated communities, where women are cooking at home, or men are in their taxis, radio is everywhere and it's not as costly to produce. We can reach remote areas, villages and refugee camps. Plus TV is very expensive to produce."

As well as expanding the reach of the station beyond the Palestinian Territories, the big focus for the station this year has been to become financially independent. Since 2009, it has relied on grants from organisations such as the UNESCO International Programme for the Development of Communication, which has helped to train women from the remote areas in media skills. Further donations have allowed the station to increase capacity to the Gaza strip on FM.

So far, the station has achieved – with little opposition or fuss – a fresh debate on the traditional values that the Middle East holds to its core. It has done this without a huge amount of expense and in a way that is winning over the hearts and minds of men and women across generations.

Whether it is helping to change behaviours remains to be seen – but giving women a voice and influencing societal opinion is the first step. Hats off to Gangat and her team for enabling women to air their views in a safe environment. And if that includes (among the highly sensitive topics of honour killings and polygamy) whether women think their husbands should do more of the washing up at home, then so be it.