Women Have Always Been A Part Of Islam... But We Lack Female Muslim Leadership 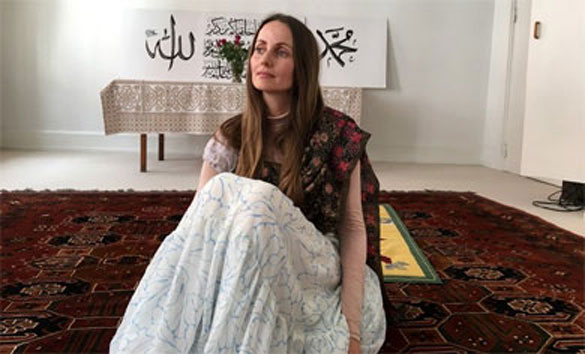 Sherin Khankan sits in a room where she serves as imam in Copenhagen, Denmark.

Negative stereotypes abound of how women are treated under Islam. But there's a new movement of women-led mosques who are challenging this, and making both Muslims and non-Muslims think differently about the faith.

Relegated to the basement, silenced by the imam and barred from the front door, some Muslim women have had enough of male domination at the mosque and are setting up their own.

From Copenhagen to Los Angeles, a handful of female mosques now cater to Muslim women who want their own place of worship, just as men have had through the ages.

"It is possible to change a narrative that has been patriarchal for centuries," Sherin Khankan, founder of Europe's first women's mosque, told the Thomson Reuters Foundation.

Her first-floor mosque - adjacent to a clothes shop – is invisible from the busy Danish shopping street below. But behind its anonymous, grey door, a quiet revolution is brewing.

For the past two years, women have been leading prayers, delivering sermons and running Copenhagen's Mariam Mosque – though Ms. Khankan says she is not challenging the Koran, just rewriting a male-dominated way of worship.

"We can do that by promoting and disseminating new narratives, with a focus on gender equality. It's not a reform. We're going back to the essence of Islam," she said, draping a red floral shawl across her shoulder.

Although men and women are allowed to meet and pray during the week at Mariam Mosque, the mosque's monthly, collective Friday prayers are for women only, said 43-year-old Khankan.

With a tiny prayer room and simple decor of candles, cushions and rugs, the mosque has about 150 worshippers. It was set up by Khankan with the support of Femimam, a group of female Muslim spiritual leaders in Denmark.

Muslim women's groups and researchers say there is a lack of female Islamic leaders and dearth of worship spaces for women, since most mosques are gender-segregated and men dominate the main prayer rooms.

So, after 15 years in the making, Mariam Mosque joined a handful of female-friendly mosques, including two in Los Angeles, another in the German city of Berlin – which welcomes men and women to Friday prayers – and a new build slated for the northern English city of Bradford, where there are plans to build Britain's first women-led mosque by 2020.

Women-only mosques have existed for hundreds of years in China, where women have had a long tradition of leading prayers.

Director of Britain's Muslim Women's Council Bana Gora, who is spearheading the Bradford project, said mosques had overlooked women and girls for years.

Ms. Gora said some women have had to pray in basements of mosques, or use back entrances where there are safety concerns such as a lack of lighting or security.

"Where do women congregate to talk about issues in society? You need a dedicated space where women can convene and talk to people who can help them, and we simply do not have those spaces anywhere," she said in a telephone interview.

"It's about women claiming their space in a mosque - there's nothing wrong with that. I can see this catapulting across different faiths as well over time," said Gora.

Khankan said the presence of fellow women in a mosque, as well as access to female spiritual leaders, meant women might feel comfortable seeking help for sensitive issues like inter-faith marriage or domestic violence.

And for the 200 or so women in Denmark who wear a face veil, their world has grown smaller after a ban on Niqab veils and body-length Burqas in public spaces, said Khankan.

Denmark's parliament enacted the ban in May, joining France and some other European Union countries to uphold what some politicians say are secular and democratic values.

The justice ministry said the ban would focus on women forced by their families to wear veils.

"If a woman is isolated and forced to wear a burqa or the niqab, by criminalizing it, you will isolate her even more, because she might not be able to go out," said Khankan, who also runs a domestic violence support group, Exit Circle.

"It's important to fight for any women's right to wear the hijab or not, to wear the niqab or not - if it's her own choice and her own free will," she said.

Khankan said she hopes to see a new generation of female Islamic scholars and worship leaders, or 'imam' - a title normally given to men, which Khankan has proudly claimed.

"We are faced with patriarchal structures which we have normalized for decades. As long as they are alive and they are not challenged, we have a problem," said Khankan.

"We have to state that women are the future of Islam. We have to make it possible for women to have the same possibilities as men," she added.

The Koran does not directly address whether women can lead congregational prayer, according to many traditional Islamic scholars.

Some argue the Prophet Mohammad gave permission to women to lead any kind of prayer, while others say that he meant to restrict women to leading prayer at home.

Still, many traditionalists do not believe a man should hear a woman's voice in prayer.

But Giulia Liberatore, who is researching female Islamic scholars at the University of Edinburgh, said seeing women reach positions of power in Islam will have positive effects.

"If women see other women striving for the highest form of scholarship, they will start seeing themselves as someone who can do that as well," she said.

This story was reported by the Thomson Reuters Foundation.