Can A Woman Be An Islamic Judge? Revisiting the Question of the Judgeship in Islam

When Khouloud al-Faqih was appointed onto the bench of the Shari’ah court in Ramallah in 2009, the event caused a media storm: she was said to be the first female Shari’ah judge in the Arab world. But she was by no means the first woman to hold a position like this. In recent decades, female religious judges and Qazis have been appointed in various kinds of Shari’ah judiciaries across the Islamic world. In Indonesia, women have been serving as judges in the state’s Islamic court (Pengadilan Agama) system for several decades, and the number of female judges has increased considerably since the mid-1990s, including at senior levels. The Malaysian Syariah (Shari’ah) Court system appointed its first two female judges, Rafidah Abdul Razak and Suraya Ramli, amidst much publicity in 2010. In Morocco, the murchidates, official female religious leaders, provide legal instruction and adjudication services. And four years ago, the Bharatiya Muslim Mahila Andolan (BMMA) started training ‘woman Qazis’ in India. These Qazis now run Shari’ah ‘Adalats in several states, and are dealing with hundreds of cases a year. 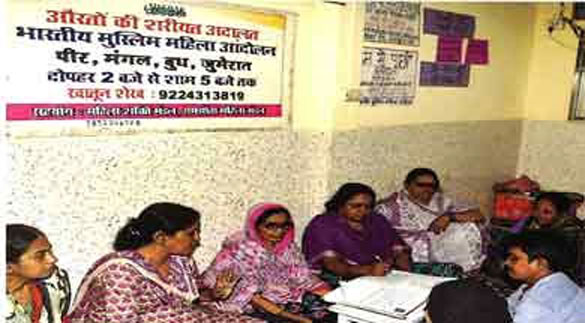 Photo: ‘A female ‘shari‘ah court’ in India, staffed by a female qazi’.

This wave of appointments accompanies an increasing global willingness by Islamic thinkers to reopen the question of the legitimacy of female judgeship in Islam. In conventional Islamic legal thought and practice, the Islamic judge (Qazi) has been perceived for centuries as being a role for men alone. Quoting the classical canons of Adab-Al-Qaza (‘Protocols of the judge’) literature, much of which dates to the Abbasid era, the ulema have argued time and again that the judge must be a mature, sane Muslim male. They have cited Qur’anic principles of Qiwamah, which famously demand male custodianship over women (4:34), and Hadiths such as ‘those who appoint a woman over them will never prosper’, as evidence that the profession of Qazi cannot be held by women. Furthermore, related sets of laws, such as those of Shahadah (witness testimony), which famously ask for two female testimonies in place of one male one; suggest that women have lower capacity than men to act as legal authorities.

But views are changing. After some twenty or thirty years when women – as part of the movement of Islamic feminism – have shown new levels of courage in re-interpreting the Qur’an and the Islamic tradition afresh to build a message of women’s equality and legal rights, they are now seeking out new ways of putting these reformed laws into practice. New interpretations of Islamic family laws which are more sympathetic to women’s rights are of limited use if they are decided and implemented within inherently patriarchal legal systems. And this is why so many Islamic feminists are hoping to influence not only the laws themselves, but the nature of the officials who apply them.

The practical need for female Shari’ah judges is quite clear. Qazi courts and other shari‘ah-based legal bodies have a reputation for being patriarchal and foreboding places for women. However, ironically it is often women who most need to approach a shari‘ah judge in the first place. Islamic family laws themselves tend to confer more independent legal power upon men than women. For instance, a husband has extensive rights under Islamic law to divorce his wife; but a wife does not have the same rights to divorce her husband, and has to call upon a Qazi to execute the divorce on her behalf. Women also need the service of an Islamic Qazi in various aspects of marriage, divorce, inheritance and other laws. This is why, in almost all countries with Shari’ah courts across Islamic Asia, Africa and the West; it is usually women rather than men who have to seek out their assistance. It therefore seems fair to assume that appointing women into Shari’ah courts would make a substantial difference to the cruelties that women can experience under patriarchal readings of Islamic family laws, and may be a way of moving towards decisions that take women’s needs into greater account.

Although the ulama have usually argued that the Qazi must be male, there are many arguments within the Islamic tradition that support the appointment of women as religious judges. Firstly, there is no explicit prohibition of female judges in the Qur’an or Hadith; to the contrary, the Qur’an teaches that women have the same qualities of reasoning and sound judgement (‘Aql, Adalah) as men. Furthermore, the classical jurists rarely addressed the issue of the legitimacy of female Qazis directly. The Islamic tradition therefore leaves much room for interpretation on the question.

There are also arguments drawn from Islamic history, some better known than others. First, even though there were relatively few woman Qazis in classical Islamic history, there were plentiful female muftis: women qualified and able to issue Fatwas (edicts). Most famous among these was Ayesha, the wife of the Prophet, who embodies Islam’s teaching that women have the same ability to act as jurists and legal thinkers as men. Her Fatwas were considered authoritative from the time of the early Imams onwards, including by the most authoritative male jurists, and have been preserved in the major schools of law. They were also particularly notable for reaching a number of important decisions that improved the rights of women; the famous Indian scholar Syed Suleiman Nadvi, in his work Sirat-i-Ayesha, first published as early as 1906-1908, reveals how Ayesha produced major Fatwas on women’s rights to divorce, inheritance and their abilities to conduct prayers and hajj.

And, less well-known, are women who did fulfil all the professional duties of judges during the Caliphal and classical periods, when Islam was at its most vital and powerful. Caliph ‘Umar appointed women to senior official posts, such as al-Shifa’ bint ‘Abd Allah, the market inspector of Medina, whose duties included administering the law. Even more striking is Thumal al-Qahraman, a woman who acted as a head of the Mazalim court system - the rough equivalent to the civil judiciary - at the height of the Abbasid Caliphate. She occupied a role equivalent to that of the chief Qazi (Qazi-Al-Qaza’). The fact that she is little known, despite her lesson for the legitimacy of female Qazis, owes not to her lack of importance, but to the neglect of her life story by Islam’s official historians. In recent times, Islamic feminists like Fatima Mernissi have recovered her example to justify women’s legitimate legal power.

Third, the Islamic principles often cited to prohibit the appointment of female judges can be shown to be specific to their contexts, rather than being general instructions. Several scholars have argued that, since the Qur’an and the very early legal tradition rarely discussed the question of female judges directly, later legal textbooks tended to base their interpretation of the laws about female judges on the laws of female witness testimony. In other words, these works reason that, if women are not equal to men as witnesses, then they cannot be equal as judges. But modern legal theorists have pointed out that this stipulation about the lesser authority of women’s testimony did not arise because of women’s unequal legal reliability, but because of their social confinement. Essentially, women who were restricted to Purdah and to the home could hardly be reliable witnesses to crimes that happened in public life.

In fact, to make the same point, the early jurists were quite clear that any inequality in witness laws was a matter of the restrictions placed on women’s social interactions, rather than any kind of inferiority of legal acumen. Abu Hanifa himself argued that the testimony of a single woman would be sufficient (and, therefore, is equal to a man’s testimony) for issues with which she had most direct contact, such as the parentage or nursing of children. The same point has been reemphasised by many later jurists. Since, today, women are no longer relegated to completely private spaces as they once were, we can therefore argue the traditional restrictions upon them as witnesses no longer hold. In turn, since the laws of female judgeship historically actually derive from laws of female testimony, then if we recognise women’s ability to serve as authoritative witnesses, then so too should we recognise their ability to act as judges.

This is why, contrary to modern public perceptions, many classical jurists did approve of women acting as Islamic judges. Many formative and classical era Hanafi jurists especially argued that women had the right to judge on certain issues, although not in cases that involved punishment (Qisas, Ta‘zir, Hudood) since this would involve women holding power over men. This instruction, which recognises women’s judicial faculties but limits their executive powers, was held by important Hanafi jurists like Ibn Hazm, al-Marghinani and al-‘Ayni, and it is repeated as an authoritative opinion in monumental legal works like the Fatawa-i-‘Alamgiri. Some Maliki jurists, such as ibn al-Qasim, made a similar argument. But other jurists have gone further and argued that women had exactly the same rights and abilities as men to act as judges. Muhammad ibn Jarir al-Tabari, the highly influential ninth-tenth century Qur’anic scholar, jurist and historian, argued that women had the same ability as men to serve as judges, across all legal issues.

It seems ironic that the legal schools that are traditionally least permissive of female judges – like the Shafi‘i– are in fact dominant in those countries like Indonesia and Malaysia where, today, female Shari’ah judges are best established. Conversely, the most permissive school, the Hanafi, is the most widespread in a range of countries where female Islamic judges are not always recognised, such as India and Pakistan. Once again, this just demonstrates that the absence of female judges is largely dependent on the social context of these societies, rather than the Islamic stipulations themselves.

Like all issues of human social relations, the Shari’ah does not place the question of the judgeship above the law, or make the institution unchangeable, but gives guidance for how the institution might function in evolving social realities. Ibn Qayyim al-Jawziya, a hugely influential jurist of the fourteenth century, showed in his work how the laws of the Islamic judgeship were never meant to be unchanging or stagnant. Working from the changed circumstances of the world around him, he justified revisions to many aspects of Islamic judicial procedure on the grounds of necessity (Zarurah). These included making necessary amendments to the qualifications and duties of the religious judge, the authority of witnesses, including women and other groups who were previously not always allowed to testify, the manner for taking oaths and hearing evidence, and for documenting and deciding legal cases. The same logic about the ongoing evolution of Islamic judicial procedure can be applied today. And with a spectrum of lawyers, politicians and activists across the Muslim world arguing that there would be many legal and social benefits to appointing female judges, the Shari’ah contains within itself the mechanisms to respond to this need within contemporary Islamic societies.