For the past several months, I’ve been bombarded by questions about what I think of Femen’s work in Tunisia. This happened after Amina, one of their local members, posted nude images of herself in protest against patriarchy, causing an uproar there in March. As an Afghan man who comes from a somewhat religious family, my opinion was sought by quite a few curious folks who equate Islam with race and/or nationality. Femen, a Ukrainian women’s rights organization, regularly challenges patriarchy with public topless protests.

The pressure was so intense that I did write something about Femen in March, but it was short. I was told to explain myself. As one friend put it, “You say you have a problem with this, but you dodged the issue.” 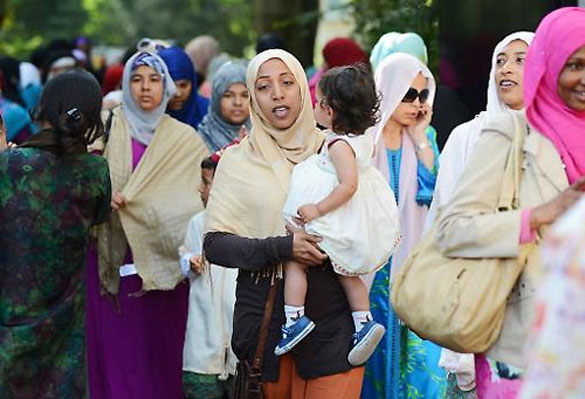 I don’t hate Femen. I have no problems with people bearing their chest in protest. It’s their human right. What I do have a problem with is how Femen’s work in Tunisia is being used to define Tunisian women. Local women’s rights activists and organisations are ignored because this fits the Western media narrative that Muslim women are oppressed, but cannot help themselves. The image of those “poor Muslim women,” gets forcefully embedded in your mind whether you want it or not – this time through Femen.

Femen hasn’t done anything in Tunisia before the Amina protest. But since then, that’s all you hear about here in the West when it comes to women’s rights in Tunisia. Her case and its aftermath is used to not just define Tunisia and Tunisian women, but the plight of Muslim women in general, without any context, earning Femen kudos for “raising awareness”.

Specifically, what did raising awareness do for Amina?

Consider the Tunisian Democratic Women Association (ATFD). I bet you haven’t heard of them even though they provided one of Amina’s lawyers after her persecution, Bochra Belhadj Hamida. Ahlem Belhadj, another ATFD member, is her psychiatrist. The media, though, won’t cover them because writing about them will then require that you write about ATFD, even though they’ve worked for human rights in Tunisia since 1989 – most of that time under a brutal dictatorship opposed to their work.

Do a simple Google search on “Tunisia and ATFD” and another on “Femen and Tunisia”. Now glare at the result of this hypocrisy where you can barely find any mention in the mainstream media of ATFD’s work while Femen is plastered all over the place.

The “poor Muslim women” narrative will then require more context, more nuance and *drum roll please* Muslim women who are trying to emancipate themselves without the help of Femen and other White saviours. 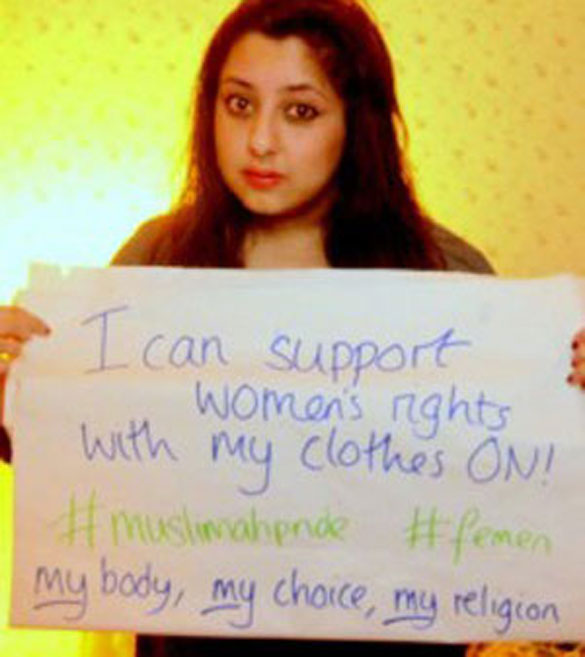 In April, the group Muslim Women Against Femen launched a Facebook page to address some of these issues. Their critique is evident in their unapologetic mission statement:

“This page is for Muslim women who want to expose FEMEN for the Islamophobes/Imperialists that they are. We have had enough of Western feminists imposing their values on us. We are taking a stand to make our voices heard and reclaim our agency. Muslim women have had enough of this paternalistic and parasitic relationship with SOME Western feminists.”

This attitude toward Muslim women is not restricted to Tunisia.

Earlier this year, some Pashtun feminist friends from Afghanistan and Pakistan, all women and all Muslim, decided to start an opinion website. The project, Pashtun Women Viewpoint, for the first time offers a glimpse into the lives of Pashtun women, their struggle for rights and the work that they’re doing towards their eventual emancipation. And they’ve had scarcely a peep written about them by a media that’s ready to churn out story after story after story about the “poor Muslim women” of Afghanistan and Pakistan, who, as you will be told, lack a voice and need angelic beings – Americans and Brits and what not – to help them get their voice out.

I wish that’s where it stopped, but it doesn’t. Not only is the coverage of Muslim women’s struggle stifled in favour of the established narrative, some media organizations are now even trying to make sure the women they cover conform to the “poor Muslim woman” image that has been created – i.e. she wears that “garment of imprisonment” also known as the Hijab.

The case of Raheel Raza, a renowned Muslim-Canadian journalist, feminist and reformist, in her own words, reveals this new tactic:

“A few days ago I received a call from a producer at BBC World Service asking if I knew of a Muslim woman who would comment on a news story about the bikini being banned at the Miss World pageant in Indonesia. I promptly responded that I would and the producer asked me some questions which I answered (I think) quite intelligently; she said she was very impressed.

Then she asked, ‘Are you a Muslim? Your website photo doesn’t really show that you are.’”

You guessed it, Raza doesn’t wear a Hijab. She goes on to add in her piece:

“Was I surprised? No. This has happened before and as Islamism grows faster than grass in the West, so do the rules about what a Muslim should look like.”

Building a false narrative in the coverage of women’s rights is nothing new. Western media, especially American media, has had a race problem for centuries when it comes to covering issues related to women of colour and it’s not restricted to Muslim women.

That’s why delving deeper into women’s rights in many Muslim countries is such a rarity.

It would require more hard work from journalists and opinion writers. Things like reading about the history of women’s rights in each country. Talking to activists on the ground. Understanding that the Hijab or “head-cover” is worn by many Muslim women out of choice and to those women who cannot choose to not wear it, it may not be the biggest hurdle facing them. That they, too, face problems with employment, education, access to health care, political participation and that all those issues may be bigger to them than the mere religious garments worn for piety — that they, too, would like to ‘have it all’.

But no. “Those poor Muslim women,” is a lot easier to explain by the media than, “Muslim women are just as sophisticated and their needs just as diverse as women anywhere.”

Until that doesn’t change, I will continue to have a problem and so will other Muslim women and men. And so should you because while Muslim women deserve to be represented accurately, you deserve better journalism.

Josh Shahryar is a reporter, covering human rights in South Asia and the larger Middle East. His work has appeared in The Guardian, Al Jazeera, The Daily Beast and PBS Frontline’s Tehran Bureau.