Myriam Bouchentouf and the Arab Spring 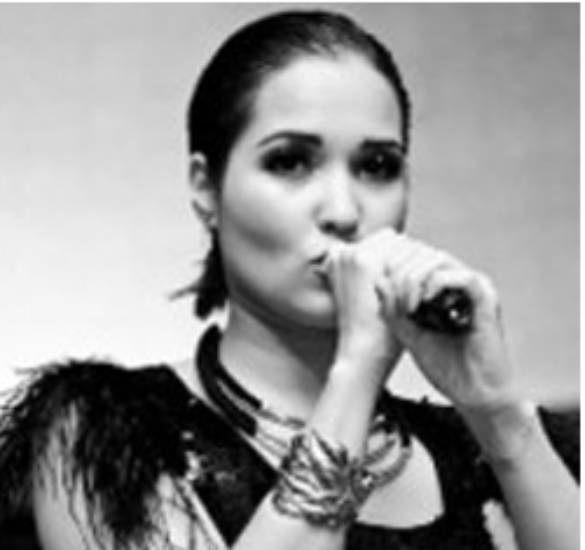 Myriam Bouchentouf is a young, passionate and creative Arab woman. She is a hip-hop musician with an envious educational record; she is politically aware and financially independent; she is brave and ambitious. Does this young Moroccan embody the future? Maybe so, but not necessarily in the way one might expect, writes Joseph Burke

Myriam Bouchentouf's musical alter ego, Master Mimz, shot to fame in early 2011 when her boisterous protest track Back Down Mubarak clocked up tens of thousands of listeners online. In October, she showcased some of her upcoming songs at the Nour Festival at Leighton House Museum in London. Her decision to play there was an inspired one.

This annual celebration of contemporary Arab culture, under the visionary tutelage of Alan Kirwan, seeks to recognise but rework the building's Orientalist past. Frederic Leighton (1830–1896) was one of the most famous British artists of his generation. The once President of the Royal Academy of Arts was an avid traveller to the Middle East and brought back seventeenth century Damascene tiles, Egyptian wooden lattice windows and other craft objects from the region to decorate the two-storey Arab Hall section of his Kensington and Chelsea home.

Kirwan saw the need to "give a contemporary sense to these cultures because they are slightly typecast in a historical vacuum. It was still about the pyramids, still about the Oriental robes." Through the festival, the meaning of the house has been transformed: no longer is it a passive site of imperial imitation and aggrandisement but a place for Arabs themselves to interrogate their own past and communicate a self-directed future.

Meanwhile, the festival serves a purpose for non-Arab audiences too. Says Kirwan: "There is this thirst for knowledge [about the Arab world]: they see it on the news but they do not really understand."

Recognising the uniqueness of this festival venue, the Arab-British Centre is co-sponsoring events this year. For Imogen Ware, projects manager at the centre, it is the perfect opportunity to support a more progressive understanding of Arab societies in light of recent events in the region: "To have a sense of admiration for the random Tunisian, or Egyptian or Libyan that is a positive response. To capitalise on that interest and intrigue, that sense of what is going on in the Arab world as being very impressive – which it is – is good."

Their choice of Master Mimz, an Arab woman who articulates her personal experiences through a musical form that first emerged in 1970s' New York amongst African Americans and Latinos, builds on this curiosity but challenges simplistic understandings of Arab culture today.

On the night of her performance at the Nour Festival, Myriam and her band drove pounding rhythms and even harder lyrics through the walls and floorboards of Leighton House. Middle-aged Arabs and non-Arabs alike cheered and bounced their heads alongside their younger counterparts.

Breaking out of narrow confines

Born and raised in Morocco, early life for Myriam was a mixture of restriction and promise. On the one hand she experienced a society that was profoundly constrictive, particularly for young women: "It was always a double standard and always very strict. As a woman there, all that matters is your reputation. Everything falls from that. Because your reputation is your number one asset, you can't date boys, you can't go out, you can't drink, you can't be seen with certain people."

But at the same time, as with many other young people around the world, images of MTV and Western film via free satellite TV suggested an exciting alternative beyond her narrow confines. Out of the static, it was hip-hop that Miriam and her peers were drawn to. She is not surprised by this: "A lot of people would always feel repressed because there is no self-expression. Hip-hop of all the genres is the one that allows the most individualistic expression, more than any other right now."

Myriam left Morocco to study first at McGill University in Canada and subsequently at the London School of Economics in the UK. Experiencing other societies and cultures has been the catalyst to a long period of self-reflection that is still on-going: "I was running away from anyone with an Arab background because you always have this fear, not that they are going to hold you down, but that you are going to get stuck in the old ways."

But as time went on she came to realise that "I am Arab. That is who I am. That is what my culture is. It is my heritage, my background and my influences. It is just about me, not being scared of it. Because I was always scared that I would be pigeon-holed or that would be all I was. But it is just about finding that right balance and finding the right way of speaking about certain issues."

Then when the protests began in Egypt, she felt great concern for a country whose culture had had such an influence on her when she was growing up: "I was so proud and I wanted to be part of it because of what it represents: the fact that it was our generation that was able to do this." Her contribution was Back Down Mubarak, which was not only a challenge to the entrenched leadership but also a comment on women's situation: "First things first, get me a job. Then let's talk about my Hijab."

Pressure from all sides

She finds it frustrating that women's role in Arab society is still so limited: "I will never be asked about my career, no one probably knows what I do at my job," – she is a geo-political consultant – "but people will ask me if I have boyfriend or if I am getting married any time soon. There is just an expectation or a set plan for you."

Not only does Myriam experience pressure from the older Moroccan generation but also from her friends and colleagues: "Every Arab person I know wants me to rap in Arabic and they want me to do a track about Libya and Syria. Then the hip-hop crowd, they want me to wear more bling and go harder. But you are not any one of those things. You are trying to incorporate all the different elements."

In an effort to avoid being other people's instrument she keeps her work bold but personal (listen out for the upcoming Sex, Drugs and Moving Out of Mama's House): "I do not like making big political statements, it is just not me and it is not my style. I generally think that the best way of getting your point across is if it is personal and if people can relate to it on a personal level." So the choice to express herself through hip-hop has been a challenging one, something others may not quite appreciate: "They do not understand what I had to do to get here. I had to go against so many people just to be able to do what I am doing right now."

Learning lessons from people's self-interested rush to judge her, she is cautious of appraising the Arab Spring: "When you do not have the law protecting you – and historically these societies are repressive to women both physically and psychologically – yes, I was very happy but I was still a bit worried."

Myriam believes that even if the Arab Spring falters along the way, it is undeniably positive: "The fact that people know we can do this, that we have ownership and voice, that is, in and of itself, so powerful. Things are bound to change. Just for authorities to know as well that they are not invincible."

The race to define this celebratory but complex and uncertain period in Arab history is in danger of reducing the whole region to a set of slogans. Moreover, Western involvement has reawakened concerns of Western self-interested interference. Leighton House's innovative programme through the Nour Festival is helping to promote a more thoughtful engagement with a problematic past and an exciting, if indeterminate, future.

Myriam won't let herself be exploited for someone else's cause. Her show at Leighton House reflects this. Just as she knows hip-hop can be denigrated in its elevation to the mainstream, she realises that the Arab Spring risks a one-dimensional description in the conventional Western mirror.

In a mature, open and confident manner, she is forging an identity that is neither constrained by nor detached from her Arab reality. It remains to be seen how this will turn out. But with a passionate spirit and a thoughtful mind, there is no reason not to be optimistic. In this way she is indeed the perfect role model for the Arab Spring. At least, she should be.