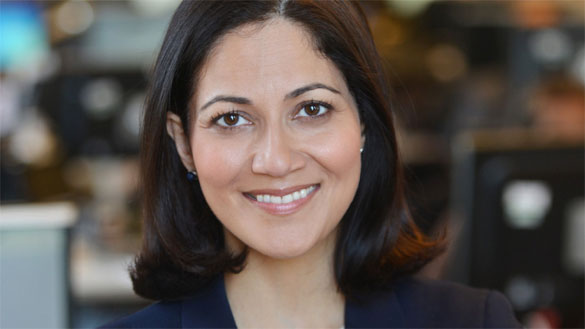 Mishal Husain would make a great diplomat. She is the most discreet, least gossipy journalist I’ve ever met; swerving controversy, blandly tactful about her Today programme colleagues. All she will say of John Humphrys is that when he digs out his cereal bowl for his morning muesli she knows its 5.30am and she’d better finish her scripts.

Moreover Husain, 41, is the consummate global citizen with her accentless RP English and several languages. Highly poised, but low on ego, she is someone who’d be equally at ease at a White House dinner or greeting a Saudi prince.

Born in Northampton to Pakistani parents, she moved as a child between the Middle East and an English boarding school. She had no idea, she says, that sitting on the kitchen floor being made to read to her mother in Urdu would leave her well placed when the focus of world news shifted east after 9/11.

It is now a year since she became Today’s much-publicised first Muslim presenter. Of course, in the gruelling three-hour programme she can cover every subject from Kevin Pietersen’s autobiography to Nick Clegg’s speech, but Husain has added notable nuance and depth to coverage of Islamic and Asian issues. On her first day she interviewed Malala Yousafzai; she has reported on the Indian election and has challenged controversial clerics.

Is she surprised by the recent intense debate about British Muslim identity? “The emphasis on what you wear on your head or how many times you pray, on the outward things rather than what you is in your heart and the way treat people, I find slightly misguided,” she says.

Only when she arrived at Cambridge University in 1992 did she come across people who called themselves British Muslims: “Before that people generally said British Asian or ‘of Pakistani heritage’. Then I became aware that Islam was the defining bit. If you’ve never been to India or Pakistan, don’t speak the language, Islam is more accessible; it has no boundaries.”

What would she call herself? “Oh gosh! I would say simply British. I feel it’s a shame that we have started to divide people much more. Now we want to know whether people are Sunnis or Shias. All these labels within communities. I’m not sure how helpful it is.”

Such religious divisions are anathema to Husain’s own family. She visited Pakistan every summer as a child and is saddened by the recent rise of religious intolerance there. Her paternal grandfather, a devout Muslim from the Punjab, married an equally devout South Indian Catholic. “I remember asking him, ‘Did you ever ask her to convert?’ He just looked at me baffled, and said, ‘We were both people of strong faith, and we understood each other perfectly.’ He used to drive her to church.”

When Mishal was a baby, her family moved to the United Arab Emirates, where her father practised as a doctor. Abu Dhabi was a sophisticated city and her parents, like many expats, were obsessed with the news. She recalls, aged seven, being told she must eat up her dinner because children in Cambodia were starving. She attended an international school, although learnt enough Arabic to ease her path later on Middle Eastern stories: “I can engage in pleasantries,” she says modestly.

But then her father was posted to Saudi Arabia. Her mother, who had been a TV producer – she subsequently retrained as a teacher – had to cover herself completely. Mishal also wore the abaya (the floor-length black cloak): “It was... not enjoyable,” she says, carefully choosing her words. “Not great in the heat.”

Her family clearly had an adventurous streak, in 1981 driving their car from Abu Dhabi to London, a five-week journey through the Saudi desert, Jordan and Syria that her father made her document in a diary. “I remember the water wheels of Hama, the grandeur of Old Damascus, where I felt as though I was in One Thousand and One Nights,” she says, “and driving through Aleppo. I have never been to Syria since, only gazed across the border from Lebanon when speaking to Syrian exiles there.” She notes that this trip would be impossible today.

Her father, working at the university hospital in conservative Riyadh, didn’t want to raise his daughter in Saudi Arabia. His own parents had worked there for the UN, and his mother hated the total lack of religious freedom: she could never attend mass. So, at 12, Mishal was sent to Cobham Hall boarding school in Kent.

“It was a bit of a shock,” she recalls. “I remember getting the clothing list and it said winter clothes and summer clothes, and I didn’t know there was much of a difference.” Although she loved school, the distance from her parents and younger brother was hard. “I do remember those airport goodbyes. And those long flights on my own, aged 13 or 14, were not particularly pleasant,” she says in her cool, understated way.

But separation made her self-sufficient and methodical, vital skills as a journalist when sent at a moment’s notice to cover the deaths of Benazir Bhutto or Osama Bin Laden. I say that her Today colleague Justin Webb describes her as supremely well organised. Husain looks pleased, but a little embarrassed.

When the Today team gets in at around 4am, they must rapidly write their cues before the weekday show begins at 6am. All the while they can track online whether their fellow presenter is working faster by the boxes ticked beside completed stories. “And Justin is particularly speedy.” So are you all competitive? Again Husain dampens any possible controversy: “Not really, it’s just fascinating to see...”

She praises above all the “collegiate atmosphere” on Today. Despite the relentless pressure and the weekly audience of just under 7 million listeners, her co-presenters were happy to answer her questions, “even though I must have been driving them mad”.

It is the most intense and demanding job she has ever had: even after a year she doesn’t feel fully bedded in. She makes light of the 3am alarm calls, but then adds later that at a party for former Today presenters, the common conversational theme was lack of sleep. At present, she goes to bed at the same time as her three sons – the eldest aged ten and twins of eight – but foresees trouble when they start staying up later.

Justin Webb has installed a rather glamorous shed in his back garden complete with shower, so he can sleep there undisturbed. “That would be ideal,” says Husain. “But our garden is tiny.”

I ask how she met her husband, the lawyer Meekal Hasmi, and she says, “This is going to sound really odd! Our mothers went to college together in Lahore, so they were friends for a long time.” Meekal’s family lived in London and hers would visit for holidays. “So I have known him all my life. He always jokes that it was an arranged marriage – arranged by me!

“I would never have predicted that we would end up together. We certainly weren’t childhood sweethearts. When we got married, I was 30 and he was 33, so we didn’t get together very young.”

Their three sons were born very close together: “I just remember the nappies: 18 to change every day.” The great upside of working on Today is being able to pick them up regularly from school.

Justin Webb is the only presenter Husain already knew: they became friends in Washington where she was the BBC’s main US anchor in the run-up to the second Iraq War. In fact, Webb says his son’s first coherent sentence was about Husain: "She’s very pretty,” he said. Which she is, with a lovely open expression and beautiful skin. Although no one would make the mistake of John Humphrys, who once asked her, as a wind-up, on Celebrity Mastermind: “Are you doing your job only because you’re good-looking?”

Because she has certainly earned her stripes, presenting on BBC News, covering the Beijing Olympics and now some BBC1 weekend bulletins. And yet she never intended to become a journalist, studying law at Cambridge to please her parents. “What I would have loved to do was read English, but I thought, ‘I’m going to have to do something vocational’ because there was that emphasis [in my family] on being professional.”

Her parents were alarmed when she swapped a solid career trajectory for vague work experience. But they needn’t have worried: after a two- year stint at Bloomberg TV she joined the BBC.

In the USA, a colleague once noted how few US journalists are employed with such obviously Muslim names. But in Britain her background has elicited few remarks. Once a Muslim man said that although he admired her broadcasting, she ought to wear the Hijab. (She said politely that she never will.) She drinks alcohol and doesn’t fast at Ramadan.

Does she think the British Muslim community is under too much pressure to apologise for every grotesque act committed by Islamic State? “I think the Not In My Name campaign is a very positive development because outrage is shared by all right-thinking people,” she says. “I would really like to see much more of the counterpoint from a theological perspective, with scholars taking to social media to refute the awful arguments we see put forward in those videos.”

Moreover she thinks that in Britain the secular-minded, tolerant strand of her faith still prevails. “I don’t think my way of life is under any kind of threat,” says Husain. “I think I’m true to the way my parents brought me up and the home I came from.”