Honour the Blood of Afghan Women Spilled All Over Afghanistan

The Taliban’s parochial attitude towards democratic values does not bode well for Afghan women. The Afghan and Taliban negotiators are quite likely to wrangle over the fundamental rights and liberties of women — widely approved and included in the post-Taliban Constitution — at the negotiating table in Qatar. The Taliban show no inclination of buying into women’s constitutional rights and freedoms, and the outfit could play hard in this respect.

Shaping the post-deal political structure with women’s active participation will be a highly contentious issue in the peace talks. Protecting the framework of the Constitution and fundamental rights of women is one of the imperatives of the Afghan republic team. The Taliban, in contrast, insist that women have to exercise their rights and liberties according to “Islamic tenets”, a term that could mean the Taliban’s interpretation of the Sharia law.

The contradiction between abiding by the Afghan Constitution and the return of “Sharia law” is likely to surface at the negotiating table. The Taliban leadership will find it difficult to be pragmatic on this issue — it risks losing its popularity among its proponents and the rank-and-file by backtracking on the “return of the Sharia law”.

It is well-known that, in the past two decades, Afghan women have made a lot of sacrifices for securing democratic principles, rights and freedoms. The blood of Afghan women was spilled in polling stations, schools, universities, educational institutions, hospitals, wedding halls, streets and social and political gatherings. In the peace talks, there could be a pushback against the gains made by them. There are apprehensions that the Constitution will be amended to curtail women’s rights and liberties. That will be a pyrrhic victory for the Afghan state.

Taliban fighters, unknown armed groups and foreign forces in Afghanistan have killed, wounded and violated the rights of Afghan women but have not been held accountable.

The post-Taliban Afghan Constitution — approved with the participation of Afghan heavyweight religious clerics, jihadi leaders, tribal elders, women, and the United Nation’s representative and international observers in 2004 Loya Jirga — leaves no room for gender discrimination and requires the state to observe the United Nations Charter as well as the Universal Declaration of Human Rights. Article 22 stipulates, “any kind of discrimination and distinction between citizens of Afghanistan shall be forbidden. The citizens of Afghanistan, man and woman, have equal rights and duties before the law.” With their participation in the Loya Jirga, Afghan clerics also reiterated their support to non-discriminatory principles and democratic values. 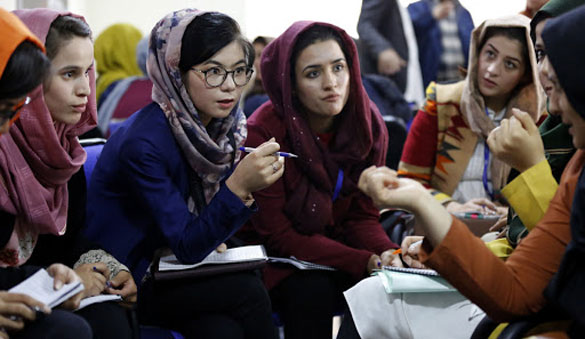 Article 3 of the constitution states, “No law shall contravene the tenets and provisions of the holy religion of Islam in Afghanistan.” Afghan moderate religious clerics could use this provision to reconcile their beliefs with democratic principles. Many Afghans believe that since the constitution does not contradict Islamic principles, it does not need to be amended. But this provision also leaves the door open for conflicting visions of the Afghan state and society — the Taliban’s push for a Sharia-based political structure and the Afghans’ persistence on maintaining the constitutional framework, women’s fundamental rights, and democratic principles. Positions could harden in the coming days, imperilling the success of the talks.

The first imperative for the two sides will be to show flexibility and bring down their expectations. Second, a council has to be formed with participation of legal experts and high-level clerics on the two sides to review the Constitution and propose necessary amendments to the articles in case of some of them are contradictory to Islamic tenets. A workable compromise could be reached with the reintegration of traditional — not radical — values and democratic principles in the Constitution. A two-step-forward-and-one-step-backward tactics could help in reaching a speedy solution to the Afghan problems. A more balanced political framework could prove productive for national and regional security and will be a win-win situation. But pragmatism should not be at the cost of human rights and women’s rights and liberties.

All the gains of the past few years will be lost if the Taliban seek to impose their warped ideology on the Afghan people and tailor women’s rights and freedoms to their dogmatic convictions. Afghan women will not backpedal after heavy sacrifices for the safeguard of their rights to life, liberty and property. The framework of the Constitution, a product of the struggle for democracy, needs to be seen as sacrosanct. A peace agreement at the cost of democratic gains will not be acceptable to the Afghan nation or state.