Long Road Ahead For Afghan Women

In Afghanistan, this year’s observance of International Human Rights Day, December 10, began with the murder of a rights advocate.

An unknown gunman shot and killed Najia Sediqi, acting head of the Afghan government’s Department of Women's Affairs in the eastern province of Laghman, as she traveled to work that morning. Sediqi’s murder is appalling, but not surprising. 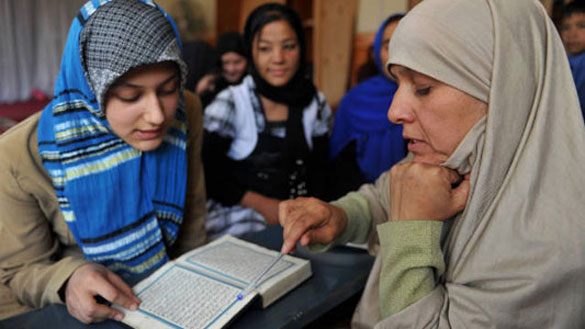 Sediqi had held her post only a few months following the murder of her predecessor, Hanifa Safi. Safi was killed on July 13, when an improvised explosive device attached to her car was remotely detonated. Safi’s husband and daughter and six other civilians were wounded. No one has claimed responsibility for Safi's murder, nor for Sediqi’s. There have been no arrests in either case.

The murders of Sediqi and Safi are more than just a measure of Afghanistan’s ongoing slide toward lawlessness and violence that is likely to accelerate as the international community draws down its support in concert with the departure of international combat troops by the end of 2014. They are also highly symbolic attacks on the tentative progress toward women’s rights, embodied by the Department of Women’s Affairs offices, since the U.S. invasion toppled the repressive Taliban regime in 2001.

Each of Afghanistan’s 34 provinces has a Women’s Affairs office. These offices, outposts of the Ministry in Afghanistan’s capital, Kabul, are the front line in the Afghan government’s effort to advance women’s rights – and to fight violence against women. The overall effort by the Afghan government to promote women’s rights has fallen far short of what it should, but no one can question the challenges that the staff of the DoWA office face, working every day to help women in often insecure provinces in a country where many view women’s rights as an affront to Islam and to national sovereignty.

Under these desperately difficult working conditions, some Women’s Affairs officials show exceptional courage and compassion. For example, Human Rights Watch has heard of cases where, in provinces with no shelter for women fleeing violence (there are only 14 such shelters in all of Afghanistan) Women’s Affairs staff members have protected battered women in the staffers’ own homes, at great personal risk.

They have their work cut out for them. The roll call of Afghan women and girls who have been victims of targeted violence just this year is far too long to recount. But a few cases tell the story of many more women and girls:  Anisa, 22, was a student and polio vaccination campaign volunteer shot to death in Kapisa Province in December; Giseena, 15, was killed and nearly beheaded in November in Kunduz Province by a rejected suitor and his friend; Mah Gul, 25, was murdered by throat slashing in October in Herat Province, allegedly for refusing her in-laws’ demand to become a prostitute; Sabira, 15, was lashed 101 times in September in Ghazni Province for immorality after reporting that she had been raped; Benafsha, 22, an actress, was  murdered in Kabul in August; Najiba, 22, was killed in June by her husband in a public execution in Parwan, which was filmed and watched around the world.

There are many more cases, including some investigated by Human Rights Watch. Friba, 35, who is deaf and mute, was raped in April or May in Parwan Province, and has tried to kill herself repeatedly, while also being threatened with “honor” killing by her family. Rabia was burned to death in Kunar Province in August, in what her in-laws say was an accident but her parents believe was murder. Masoma, a teenager, was executed in September in Herat Province after running away to escape forced marriage; the man she ran away with was also killed.

The Afghanistan Independent Human Rights Commission reports that 4,000 cases of violence against women occurred in April through October of this year, an increase of about 1,000 cases over the same period in 2011. When President Hamid Karzai signed Afghanistan's Law on Elimination of Violence Against Women in 2009, for the first time, many forms of abuse of women were made a crime. However, enforcement by police and prosecutors has been desperately lacking.

Foreign support for women’s rights in Afghanistan is also on the wane. International engagement in Afghanistan is declining sharply, with cuts in assistance already under way. Foreign aid, including for essential services for women and girls, is likely to decline dramatically in the years ahead. With increasing rates of violence, declining international interest, and a national government unwilling to make protecting women a priority, the reality is sinking in that guarding the slow-but-important gains in women’s rights in Afghanistan will only get harder in the years ahead.

Gains in women’s rights have been an undeniable, if fragile, victory over the last decade. As Afghan women face an increasingly dangerous future, there has never been a more important moment for the United States and other countries that have been so closely engaged in Afghanistan for the last 11 years to lay out solid commitments for how they will support Afghan women in the hard years ahead.

Editor’s note: Heather Barr is Human Rights Watch’s Afghanistan researcher. The views expressed are her own.