Studies on traditional medicine span various fields of knowledge, including folklore, anthropology and medicine. Folk medicine focuses on the effectiveness of healing, and deals with behaviour and beliefs. These may sound bizarre and downright silly to practitioners of modern medicine, but they have been practiced since time immemorial in different cultures.

Maternal health refers to the health of women during pregnancy, childbirth and the post-postpartum period. While motherhood is generally positive and satisfying, for some women it is connected with misery, ill-health and even death. Issues pertaining to pregnancy have always been considered critical for the mother as well as the child.

It is true that the mother’s good health also has a positive impact on the child. Since traditional methods are practiced  all over the world, it is important to understand the medical needs, local practices, and perception of pregnancy, conception, the ‘baby blues’ period and how they are impacted by culture and religious convictions.

In numerous developing countries, there are more conventional healers than allopathic professionals, and the number of inhabitants in allopathic specialists is frequently amassed in urban regions, further decreasing provincial access to restorative consideration. 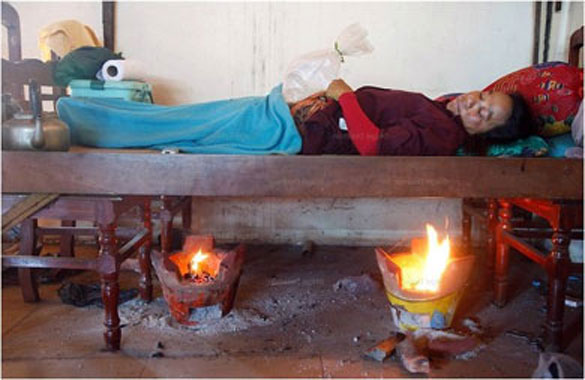 The debates over traditional healing, alternative medicine and science is heating up across the mainstream media through war of words. Deepak Chopra, an alternative medicine advocate is frequently challenging the scientists, primarily Richard Dawkins. Chopra has been spreading absurd methods of healing on both general as well as maternal health, while The New York Times describes him as a “controversial New-Age guru”. Even though large groups of people across the world are following Chopra but scientists criticize his ideas as his treatment relies on placebo effect and misuses ideas from quantum physics.

The experience of pregnancy and becoming a mother is largely influenced by socio-cultural background. Also, the traditional view of pregnant women varies from culture to culture. There are many superstitions as to what she can do and should not do. In some cultures, pregnant women are forbidden from entering graveyards, fearing that the child she is bearing shall starve and be weak.  An alternate belief is that if the lady curves her foot on a grave, her child would be conceived with a clubfoot. A pregnant woman is expected to wear a medal of a patron saint to protect herself from evil.  For many centuries, in the west, St. Brigid or St. Elizabeth medals were worn during pregnancy and childbirth for protection.

In Asian culture, pregnant ladies are made to wear a talisman known as “Taveez” or “Kavach” to protect themselves and the child. A pregnant woman has to abstain from rabbits, since it is believed that her tyke would be conceived with a bunny lip. In different cultures rabbits were, by all account, not the only creatures to keep away from during pregnancy.

It was believed that cats could steal the baby’s soul, with pregnant women expected to avoid contact with newborn babies, delivered from another woman, since newborn babies were considered to be new arrivals from the “spirit world” and could cause a miscarriage.

In the Indian subcontinent, it is believed that eclipse radiations can damage the foetus and lead to complications and pregnant women should avoid going outside during lunar or solar eclipse. A number of other rituals are adhered to in order to protect both the unborn baby and the pregnant woman alike, like not eating or drinking during the period of eclipse. This tradition is still followed with reason to take preventive measures. No scientific reason or evidence exists that demonstrates that going out during an eclipse can harm the fetus. Many women obviate from the eclipse to prevent other complications. Due to the cultural identity some women cannot refuse to follow these rituals in front of their elders.

Traditionally, the Jewish pregnant women neither have baby showers nor do they buy things ahead of time during pregnancy since it is considered bad luck. The evil eye has profound roots in Jewish culture for centuries. It is assumed that celebrating good news in anticipation, like gifts and shower before the birth of the baby, might cause harm.

In Afghanistan pregnant women have been going to traditional healers rather than hospitals. There are few female health workers or teachers in the region. They never discuss news of a pregnancy or take a pregnant woman to see a midwife, let alone call a doctor in the middle of the night. However, recently Save the Children operations in Urozgan province located in the center of Afghanistan has broken stereotypes regarding traditional healing methods. In this digital era, the growing trend to overcome tensions and solution of the daily life problems by the talisman, are relentlessly advertised on various websites primarily for safe pregnancy.

The flower of the Maryam (Anastatica hierochuntica) is a small shrub found in northern Africa, Iran, Saudi Arabia and Pakistan popularly used during a traditional method during childbirth. For hundreds of years the flower of Maryam has been used by traditional midwives without any scientific rationale. During delivery time the flower is soaked in water and it is supposed to open, which lessens labor pains and make the delivery easier.

In the old Irish culture, an expectant mother could determine a baby’s sex by tying her wedding ring to a string and holding it above her stomach.  If the ring moved in a circle it would a boy, if it moved back and forth, it would be a girl. There are several versions of this test to determine the gender of the child. The accuracy of these tests is a moot point.

It was also believed that eating honey during pregnancy would result in the child with a sweet tooth; and that by eating spicy food during the course of the pregnancy, she’d bear a baby that would cause a lot of trouble and mischief. Eating a lot of carrots would help prevent the child from having to ever wear glasses (this also has a scientific base as carrots contain carotene – a chemical which synthesizes Vitamin A which prevents night blindness in children). Eating a lot of corned beef and cabbage, it was believed, couldn’t hurt; however she must avoid green potatoes.  Traditionally, there was a belief that intake of green potatoes would cause birth defects. Some women and their mothers are afraid that advance preparations of the birth, especially baby clothes would cause the death of the unborn baby.

Washing windows or raising both hands/arms above the head was to be avoided during pregnancy.  In the event that the pregnant woman did this, it was accepted that the umbilical cord would wrap around the child’s neck. Besides, the father is told to spend time talking to or singing to the baby while the mother is pregnant, to strike a chord with the baby and to ensure that the baby knew it was welcome and happy. Being born in the house with a cat was avoided.

In Cambodia roasting and steaming is a traditional practice for pregnant women known as Ang pleung. Many traditional healing methods are based on time-tested remedies but there are some linked to childbirth that may be harmful or even fatal. One of them is roasting, as mothers lie above a bed of burning coals after giving birth, in order to keep them warm and restore their energy. The practice is applied for a period ranging from three days to one month, depending on how much money a family has for charcoal. The practice of roasting can cause asphyxiation, respiratory diseases or dehydration in both mother and baby. Another belief is that newborns don’t need to eat when they are first born and this may cause malnutrition and low birth-weight in babies. Many old practices are still used today and nobody wants to break the traditions.

Billions of dollars are spent on different forms of traditional medicine to folk healers, rituals and informal health practitioners every year as more and more people get on the bandwagon and try out some type of optional medicine either as an essential or correlative treatment.

Traditional folk practices may cause health problem or illness to pregnant women. From spiritual health to emotional needs, alternative medical practitioners believe in a holistic approach to treatments and cures. Traditional medicine tends to view pregnant women and maternity issues as separate entities using cultural practices which are considered as part and parcel of their culture, which emphasizes on supernatural powers. Every pregnant woman representing that particular community goes through these rituals. This may explain why most informal health practices and surgeries carried out come with a long list of possible complications and side effects.

Traditional practitioners believe that 90 percent of all illnesses have their roots in the mind and therein lies the basic principle of most of their treatment methods and practices.

Alternative medicine is not a quick fix. In fact, it demands a bigger commitment and additional effort on a person’s half than ancient drugs. Habits have to be broken and changes are needed before pursuing methods relating to maternal health. If this doesn’t happen, there is a fair chance of other drugs operating. There is conjointly plenty of trial and error attached to different therapies. What works for one person need not essentially work for another and striking upon the proper treatment might take time and money. It is also recommended that traditional methods should not be used as the sole treatment in serious illnesses. If not used in a holistic manner, simply substituting drugs with folklore therapy will not work.

Culture plays a major role in the way a woman perceives and prepares for her delivery. Each culture has its own values, beliefs and practices related to pregnancy and birth. Women living under various cultures are at high risk of maternal mortality in the postpartum period. Malnourished, anaemia, poverty, lack of skilled birth attendants and limited prenatal and postpartum care are some of the issues facing women living in poor countries. Cultural and religious practices play no role in maternal healthcare and need to be weighed when setting future maternal health program development. Therefore, maternity health care information must be presented in a scientifically appropriate format that is useful to patients, healthcare providers, and other stakeholders in order to be efficient and effective. More number of health care units and research centres in the rural domains are required to wipe off dangerous and life threatening traditional healing practices across the world.

Haroon Janjua is a freelance journalist based in Islamabad, Pakistan. He is the 2014 International Green Apple Award winner.