World’s First Hijab-Wearing Champion Wrestler Says She Becomes Transformed In The Ring, Ready To Take On Her Opponent – And Conservative Islamic Critics 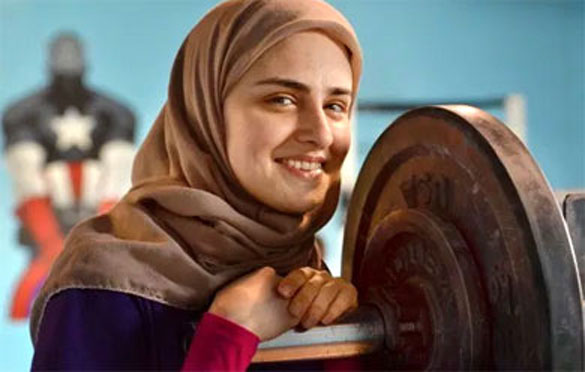 Nor Diana can remember vividly the first time she stepped out to make her wrestling debut. Outside the ropes she had always been a quiet and studious Hijab-wearing Malaysian woman, but here in the ring, dressed in black leather embossed with flames and as the crowd roared, she suddenly felt like a fire burst from inside her: here she was Phoenix.

Nor, who last month won Malaysia’s biggest wrestling tournament – defeating four men for the title – cuts an unlikely figure for a pro wrestler. A 19-year-old who is just 152cm (5ft) tall and weighs 43kg (94lbs), she speaks softly as she sits in her training centre in the town of Puchong, close to Kuala Lumpur, dressed in her hijab, wide glasses and floral baju kurung, traditional Malaysian dress.

“In the real world I am really shy, I am very reserved, but something happens to me when I go into the ring as Phoenix, I become a totally different person,” she says. “Phoenix is more fun and more energetic and brave, she has this fire in her and she always wants to win. And that’s why I love wrestling because I get to do things I could never do in real life.”

Indeed, over the past four years Phoenix has steadily grown to be one of the biggest names in Malaysian pro-wrestling, defying stigmas and the expectations often placed on Muslim women in Malaysian society and bringing in a whole new female crowd to the male-dominated sport. “The response has been amazing,” says Nor. “Last year, we had all-female wrestling tryouts and no one turned up. But this week we had tryouts and three hijabi girls came to the training.”

‘She Just Transformed Into This Whole Different Person’

Nor’s love of wrestling began when she was 14, playing WWE wrestling games with her brother on his PlayStation Portable, and then watching matches on TV with her father and four brothers. As she watched WWE icons such as The Rock, The Undertaker and John Cena be thrown around the ropes, something stirred in her. “I just loved the characters of the wrestlers and stories they told for each match,” she recalls. “And even though it seemed impossible, I kept thinking: what if, one day, I could be one of them.”

But after watching female wrestler Sasha Banks fight, finding her way into the ring became an obsession. She would frantically Google professional wrestling in Malaysia and scour Facebook, until she came upon MyPW, Malaysia’s first and only pro-wrestling outfit which in 2015 was about to put on its first show. Nor went to two live matches before finding the courage to attend tryouts, her younger brother and father coming along for support.

Her coach, Ayez Shaukat Fonseka Farid, recalls his first encounter with Nor, when she sent him a message on Instagram asking how to join pro wrestling. “When I saw she was this small hijabi girl, I was a bit surprised but for me, I’ve always believed that if a person is passionate about something, who are we to stop them,” says Ayez.

“Since that first day, she has never missed training. The only issue was that she was very, very timid, it was very hard to break her out of her shell, and in order to be a good pro wrestler you need to be very confident and very charismatic. But I saw potential in her from her first match because as soon as she came on, comments” she has to endure. “There has been quite a big backlash, people telling me that hijab girls should not be doing extreme sports and I should not train with guys because it was shameful,” says Nor. “It is hard for me because I am with my phone 24/7 and you can’t help but scroll through all the comments.”

“But actually they fuel my fire,” she adds. “If I had listened to those voices when I started I wouldn’t be where I am now. So I use their words as motivation to train more, to prove to these people that being a hijab girl should not stop me, that I have something here I know I can do well – no matter what they say.”

Source: The Guardianshe just transformed into this whole different person.”

“What fans really love about her is the heart,” he added. “She gets slammed around a lot but she always gets back up.”

Professional wrestling in Malaysia is still in its infancy, and while there are now 30 pro wrestlers who take part in matches five times a year, it is still a hobby for most. Before her first match, Nor, who works full time in a hospital, and her father had to scour a second-hand shop to pull together her Phoenix costume.

But being cast into the spotlight as the world’s first Hijab-wearing wrestler has also not been easy in Malaysia. While largely tolerant, the 60% Muslim-majority country also has a strong religiously conservative streak which has been emboldened by the growing influence of the Malaysian Islamic party, which recently has pushed for elements of sharia law to be implemented throughout the north-eastern state of Kelantan. In April, a public discussion about women deciding to remove their hijab resulted in the female panellists being investigated by the Islamic authorities.

‘Some Of The Guys I Train With Cried Too’

For the first three years, Nor chose to wear a luchador wrestling mask when she fought in public as Phoenix. “I was always afraid of what people in Malaysia, but especially the fans, would think when they saw a hijabi girl wrestling and so wearing a mask made it a bit easier,” she says. However, in December 2018, a storyline was decided for her next match: if she lost, she would have to unmask and reveal her identity.

When she was defeated by her opponent, Luna, she felt this deep fear in the pit of her stomach “Before I took off the mask I was really afraid,” says Nor. “But as soon as I took it off and people could see that I was wearing a hijab, people started cheering and shouting all these supportive things and I cried in the ring. And my friends told me later that backstage, when I unmasked, some of the wrestlers, the guys I train with, cried too. For them it showed how much pride I had as a wrestler.”

The support she has had from the wrestling community has made it easier to cope with the backlash aimed at her online, mainly on Facebook, from more conservative quarters, with comments on morality or calling her a slut and a whore. Nor sighs deeply as she discusses the “horrible, really bad personal