Feminist Artist in the Ottoman Empire: Mihri Rassim Was One of the Most Intriguing Turkish Artists of Her Day — but Known More For Her Eccentric Lifestyle 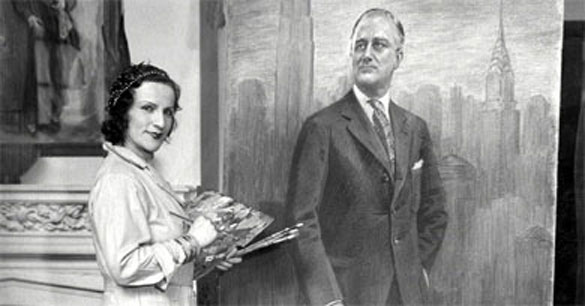 Mihri Rasim was one of the first and most renowned Turkish female painters.

Mihri Rassim was one of the most intriguing Turkish artists of her day — but she was known more for her eccentric lifestyle than for her art.

She shunned her royal upbringing by running away from home to pursue an arts education, and to secure the freedoms that the Ottoman Empire didn’t provide to women in the early 1900s.

She was a pioneer, opening the first art college for women in Turkey, and encouraged artists for decades. And she was a cunning marketer who sometimes bent the truth about her artwork as a way to support herself when the going got rough.

“She was an avant-garde artist whose most avant-garde work was her own life,” said the art historian Ozlem Gulin Dagoglu, who is writing a monograph on her.

Rassim was representative of an era toward the end of the Ottoman Empire when the daughters of the elite were encouraged to learn about art, literature and music but then limited to becoming art teachers, if they were fortunate to have careers at all. Historians are now trying to piece together the stories of their lives; an exhibition of Rassim’s work was held this year at the SALT Galata, an art institution in Istanbul.

Rassim was born on Dec. 13, 1885, in Istanbul. She used variations of her name throughout her life. Her father, Ahmed Rasim Pasha, was a military doctor; her mother, Fatma Nesedil Hanim, was an Abkhazian princess. Mihri began painting when she was young, taking lessons from Fausto Zonaro, the Italian court painter for the ruling sultan, Abdul Hamid II.

At the time, there were no college-level art schools for women in the Ottoman Empire, so Rassim left her family in about 1906 to study at the Académie de France in Rome and the École Nationale Supérieure des Beaux-Arts in Paris. Recognized for her skill in portraiture, she went on to paint many powerful men.

While in Europe, she worked with John Singer Sargent, Léon Bonnat, Albert Besnard, Arthur Kampf, Rudolf Bacher and other painters, and she met and married Musfik Selami Bey, a Sorbonne student who later became a diplomat of the new Turkish republic.

The couple moved back to Istanbul in 1912. It was a good time to return. Most forms of Western art had been banned there for centuries, but the winds of change that had helped nation-states sprout across Europe were transforming Turkey as well.

Rassim saw an opportunity to propose that an art school be established for women. “Ideas of freedom, equality, justice, comradeship have arrived in our country,” she was quoted as saying in addressing the minister of education in 1914, “but why is it only men that are benefiting from them?”

The School of Fine Arts for Women opened the next year, with Rassim at the helm, alongside the painter Omer Adil Bey.

“Under her tutelage, Muslim women were able to paint landscapes en plein air, and draw from nude female models as well as antique statues,” Dagoglu, the art historian, said.

Rassim, seated front row, fifth from left, in about 1919 with fellow students and teachers at the École Nationale Supérieure des Beaux-Arts in Paris, where she was recognized for her skill in portraiture.

While Rassim helped start the careers of artists like Fahrelnissa Zeid, who became known for her large-scale abstract paintings, she still yearned to be recognized for her own artwork. It was a sentiment she expressed in 1919, when she organized a show of paintings in her home and was interviewed by the journalist Mehmed Zekeriya Sertel for Buyuk Mecmua magazine.

She criticized the limitations that her conservative society had imposed on women, preventing them from becoming better painters. It was frowned upon, for instance, for women to paint in public.

“This is why women mostly painted friends and acquaintances in interiors,” Dagoglu said.

Rassim brushed off her portraiture as “worthless” and insinuated in the interview that she wished she had better work to show. “I am ashamed to call this my oeuvre,” she was quoted as saying.

“I make most of these paintings you see here for commerce,” she added.

Later in 1919, when the Allied powers occupied Istanbul in the wake of World War I, Rassim went back to Rome, divorced her husband and mingled with the fascist cultural elite under the fast-rising Benito Mussolini. She became friendly with the poet Gabriele D’Annunzio and the sculptor Renato Brozzi, and through their connections she painted a portrait of Mussolini himself.

She also tried to open an art academy for Turkish students in Rome and painted a portrait of the new Turkish president, Mustafa Kemal Ataturk, to convince him of her abilities and perhaps to charm him. Unable to gain his favor, though, she left Europe in 1927 for the United States to pursue her artistic ambitions there. She found work as a high school art teacher in Connecticut.

“I did not come to the United States as a famished immigrant to make money,” she wrote in 1935 in a letter to Hamilton Holt, the dean of Rollins College, near Orlando, Fla., “but had an ideal in mind: to be considered among the talented people.”

Rollins had offered her a teaching job, but she wasn’t able to accept it because of her immigration status.

“As an immigrant woman artist, the post-Depression era was especially hard for Rassim,” Dagoglu said, “but she was a resilient and resourceful artist with a knack for marketing.”

“To My Dear Vecih, Istanbul Memory” (1920), a self-portrait by Rassim.CreditYapi Kredi Collection

As she sought to build a career, she moved to New York, where she highlighted her Turkish nobility, calling herself Princess Alciba, her Abkhazian family name. She held salons at her Manhattan home and participated in group and solo exhibitions in galleries.

In April 1932, for the poet Edwin Markham’s 80th birthday celebration at Carnegie Hall, she presented him with his portrait as a gift in front of 2,000 people.

But despite her moderate success, she struggled to support herself. In September 1932, to pay her debtors, the New York City marshal auctioned off her portrait of Franklin D. Roosevelt for $40 ($688 in today’s dollars). She had valued the painting at $2,000 (about $37,500 today).

Dagoglu said that after Thomas Edison died in 1931, Rassim tried to sell a portrait of him to his family, saying in a letter that he had posed for her. But Dagoglu found that she had actually based the painting on a photograph.

That portrait, showing Edison deep in thought in his lab, was rediscovered in 2011 and is now at the Cornell Fine Arts Museum at Rollins College.

In 1931, she married Salvatore Virzi, a singer at the Metropolitan Opera. She became an American citizen in 1943.

Rassim died in 1954. She was about 69. She was believed to have been buried in a potter’s field in or near New York, but Dagoglu was unable to find any records of any of the names that Rassim might have used.

Many of the paintings she made in the United States are considered missing — she was a poor record keeper and newspaper accounts say that her studio was once robbed — but, like the Edison painting, they are slowly being found.

One of her later portraits, of Rezzan Yalman, the wife of the prominent Turkish journalist Ahmed Emin Yalman, whom Rassim befriended in the early 1940s in New York, was recently discovered in a private family collection. It was included in the SALT Galata exhibition in Istanbul.

Berna Gencalp, a filmmaker who had helped put together that exhibit, is working on a documentary about Rassim, titled “Kim Mihri” (“Who Is Mihri?”), which is expected to be released next year.

“We don’t know if she achieved all her goals,” Gencalp said in an interview, “but she definitely came ‘to be considered among the talented.’”