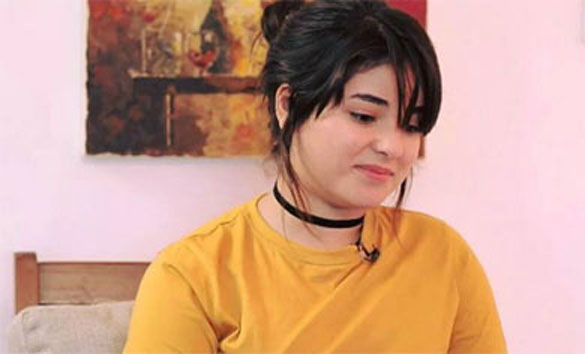 Zaira Wasim is a former Indian actress. She has worked in several Bollywood Hindi films.

"Decisions are personal when they are made on the basis of free will only and not on the basis of general will. Decisions can be considered as free when every individual of society is treated equally."

India is a diversified nation having different communities, cultures and beliefs. In every single sort collectivism has superseded the individuality of an individual. Whatever an individual does or prefer to do actually represents the collective interest of a specific community. Consequently a woman irrespective of caste, religion, culture, etc. also has a distinctive identity and responsibility towards her society.

A woman is discriminated on the basis of her gender and is considered weak and inferior to a man in almost every community. In such a set-up, to what extent it is logical to believe that whatever a woman is revealing is true and rational? How is Zaira's decision really personal and free unless she is expected to represent her community? Did the community give her right to choose the profession? If the answer is positive then only she will be free to quit it also. Zaira has managed to make her debut in the Indian cinemas and also has achieved success to a great extent, but her decision was barely accepted by the members of her community. This actuality can be inferred through the reaction of the members of her community and other people after her entry into as well as exit from the Bollywood. On one hand she had to face a lot of abuse or troll on social media for acting in the Bollywood and on the other hand she gained appreciation for quitting the profession of an actress in the Bollywood. How can she be allowed to pursue her career in the Bollywood when there has been a complete shutdown of Cinemas in her hometown? If movies are believed to divert the youth from their religious faith then Zaira cannot be accepted as a role model for the youth who are passionate about pursuing their career in the Bollywood. The tolerance towards her acting career in the Bollywood can be described as a hypocrisy and duality.

The fundamental question which arises here is does this belief affect in a similar manner to everyone or it is just only an objection against the role of woman representing her specific community and religion as an actress in the Bollywood? Furthermore, how can a specific religion prohibit a woman from acting in cinemas when that particular religion according to a female Islamic Judge recommends equality to her? Undeniably certain rules can be observed for women belonging to different religions and communities like having a 'Ghongat' in Hindu, 'long hairs' in Sikh and scarf in others but these hardly safe guards a woman from becoming an actress in the Bollywood. Does only Islam recommend it strictly or others follow their religion faultily? How can Zaira's decision be free and personal when she is expected to follow the Hijab perfectly?

When Zaira is treated as a gospel of the idea of success and role model for other youth attempting to pursue their acting career in the Bollywood and trolled for her success in the Bollywood industry then how can be her decision considered as free and personal? It could have been really personal and free if she had received a usual reaction from both within or outside the members of her community for her entry into and exit from the Bollywood. How can her personal choice or interest be interpreted by any socio-political party as a definition of the interest of other youth of Kashmir valley? If she is free and equal to choose any career for the development of her personality then how is she responsible for influencing other youth to pursue acting career in the Bollywood by becoming their inspiration? Inspiration is natural and also a matter of choice of an individual to get inspired by any person who influences a particular individual.

The Kashmiri Muslims cannot always be treated as conservative in general as they also love to watch movies and visit theater/cinemas outside their native place. A person who loves to go cinemas should feel proud of actress belonging to his or her own community as she brings recognition to it in a particular way.

According to Zaira, her life has changed completely after joining the Bollywood; as she gained name and fame but violated her Imaan. Is this not her helplessness that her Imaan doesn't permit her to become an actress in the Bollywood? Why then to blend the acting career in the Bollywood with Imaan? How acting career in the Bollywood can contaminate the Imaan? Predominantly how a person can lose his/ her Imaan while unfolding his/her natural capabilities? If a Muslim girl can become a doctor, a nurse and a singer then why cannot she become an actress in the Bollywood? In addition to this, if it is the case then there are many Muslim women from within India and outside who have contributed and are contributing to the movies, cinema, theater, music, dance etc. Or was not Zaira treated humanistically to perform her role in the industry? For instance, Indian films have also largely depicted the women in sexualized roles. Objectifying women on screen has been a prominent issue that Indian films have been battling with. Besides, our films have been infamous for depicting female characters in set stereotypical frames.

According to Maslow, there is a hierarchy of human needs and people prefer to fulfill them according to their age and time. Each need demands a particular force to get fulfilled. Religion may fulfill one's spiritual need but cannot unfold a human personality completely. Zaria as a free individual also wanted a platform to get her talent realized completely. Merely living for her faith or community cannot develop her personality inclusively. Moreover, is it right to say that her profession is inconsistent to her religious faith or is her way of belief that goes against her profession. I think the later is more logical as there are many people from Muslim community who keep balancing between their personal faith and materialistic achievements.

The decisions of women will not rest on liberty and individuality until society is equal, inclusive, just and impartial towards women. The individuality and liberty of Zaira can be believed when her profession is described without subscribing her faith, community and place. Her own words like she is quitting Bollywood as it hurts her Imaan or is not consistent to her faith depicts only that how the Faith controls and dominates a woman's life. Many people may think that her decision to enter the Bollywood or quitting it was her personal choice but I am of the opinion that her entry to Bollywood was merely a wish not a choice as she has mentioned that she may fit perfectly in the Bollywood but does not belong to it, while she continues to work in an environment that has consistently interfered with her Imaan and also threatens her relationship with her faith.

We have to create a society where a person has not to face conflict between her soul and body, the spirit and mind, and faith and profession because if we even believe God and everything is created by him. How can a person sacrifice real world for another which is merely a belief. Why Zaira has failed to convince herself that her acting career in the Bollywood should not hurt the Imaan that had also brought a lot of love, support and applause in her life. Why she cannot be happy, stable and blessed while performing in the Bollywood? How the believing in God prohibits an individual from acquiring the knowledge about materialistic world? Does Zaira really meet God for guidance or was she guided by self proclaimed representatives of God? To what extent should we believe in other's interpretation when every human being is born morally equal? How can one limit his or her purpose of life to only worshiping God as truth? Should our values be a reflection of our desires or should our desires be guided by the values? If joining and performing in Bollywood really hurts one's Imaan, faith or religion then various people like Zaira have worked before and are still working, then are they also hurting their soul, community or religion. She could have just left the arena without mentioning about her faith if she really was free to decide it.

Hakim Singh, is the Senior Research Fellow in Public Policy and Public Administration at Central University of Jammu,