Fuss and Fury over a Piece of Cloth

It’s not on everyone, but it is enough people to make you lose count after a while.

Now think I’d be walking around in chains, or shackles, or whatever Lady Gaga decided to make the Fashion Police froth over. Which is why, it’s funny when you realise all the fuss is over a piece of cloth, covering my hairs. 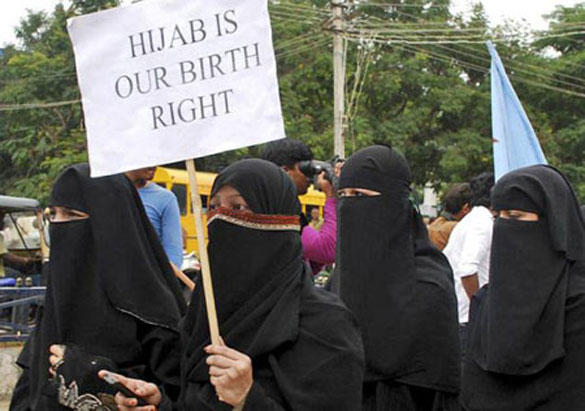 IT'S A FREE COUNTRY ... Students in Shimoga protest against a decision prohibiting the wearing of hijab in a college in Dakshina Kannada, Karnataka.

The Hijab, or the Muslim veil, has been getting attention circa forever. It is a source of oppression to some, liberation to others, of confused “Are they Arab nuns?” and really good cover-ups on bad hair days. But more than anything, the Hijab is one of the most misunderstood aspects of the Islamic faith.

First things first, the Quran clearly states that there is no compulsion in religion; you can either take it or leave it. But because people would rather listen to a bunch of extremists than read the text they supposedly preach, we see many unfortunate and terrible cases where women are forced, sometimes, violently, into the Burqua and the Niqab even if it’s not something they’ve come to embrace.

As a Hijabi, this is offensive to me and other women who choose to wear the Hijab. They’re hijacking something that is sacred and important to us and turning it into something so ugly that all that the world can see anymore are the negative things about it.

Hijabi women across the world are discriminated against, denied jobs and even attacked, under the notion of a very false and wrong sense of liberalism. To say that a covered woman is backward and oppressed is just as bad as saying that one who is not is immoral and promiscuous.

Governments, whether they’re Iranian or French, need to stop deciding what women can or can’t wear, and realise that a woman is not defined by any standards but those she chooses to be defined by.

Open mindedness, after all, is anything but a one-way street.