Abandoned, Aborted, or Left for Dead: These Are the Vanishing Girls of Pakistan 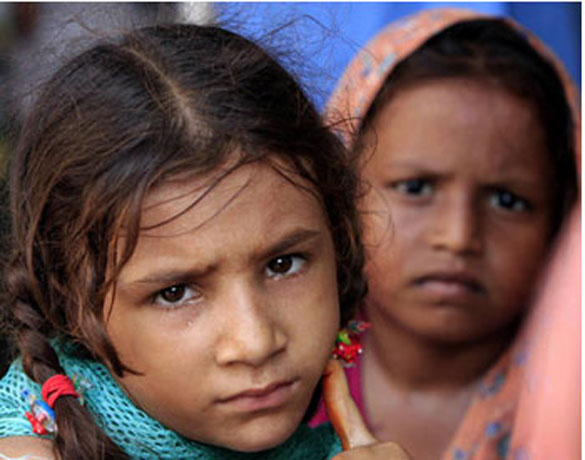 Rough estimates, backed up by the scenes at clinics and orphanages; suggest there may be millions of "missing" women and girls due to families' preference for boys.

Dr. Saida Zafar, an 86-year-old gynaecologist at the Race View Clinic, hovers over a female patient as she performs an ultrasound on her pregnant belly.

Within minutes, the patient asks a question that haunts most pregnant women in Pakistan, "Is it a boy, doctor?"

It's not a boy. The woman is expecting a girl.

Zafar says that when she finds herself in this position, she has to balance the patient's right to hear the truth against her own desire to save the female foetus from the risk of sex-selective abortion, as many families here prefer sons. So, often, she lies.

"I tell everybody, 'You are having a boy,"' Dr. Zafar tells us in English, so the patient won't understand.

Other doctors at the clinic face this same challenge every day, and many share similar frustrations.

"Only for the first child [do] I tell them if it's a girl or a boy. But after that, if it's a boy, it's alright, but if it's a girl, I don't say anything," says Dr. Ain-ul-Ghazala, 58, another gynaecologist at the clinic.

Zafar says she withholds the sex of female babies from expecting mothers, as the news will almost always lead to cries of sorrow. And those cries can lead to action, as evident in Pakistan's sex ratio at birth.

Globally, a country's sex ratio can naturally range as high as 104 or 105 newborn male children for every 100 newborn female children. But, as in neighbouring India, Pakistan's sex ratio is thought to exceed even that, suggesting that such anecdotal experiences as Dr. Zafar's are part of a larger trend.

According to one estimate by the CIA World Fact book, Pakistan currently has 6 percent more males than females. But Stephan Klasen, the Chair of Development Economics at the University of Goettingen in Germany, says he suspects the problem is actually much worse. Klasen studies the phenomenon of "missing girls," a term he uses for the shortage of girls in some countries, typically caused by parents' preference for boys. And because Pakistan hasn't had a census in 14 years, which typically provides the most reliable data, he says he's concerned that the real disparity between the sexes in Pakistan might be even higher.

Visiting the clinic on another day, we go to the second floor to watch the doctors and nurses deliver a baby by caesarean section. The mother lies nervously on the operating table. When the doctors pull out the baby, she asks excitedly, "What's the sex of the baby?"

"It's a girl," responds Dr. Ain-ul-Ghazala, the gynaecologist, in a quiet voice.

The mother's smile disappears as she turns her face to the wall. This is her second daughter.

The doctors clean the baby, wrap her in a blanket, and take her to the nursery, where families usually gather to see their child for the first time. An hour later, a large group comes here to celebrate the birth of a boy. A few cribs away, the newborn girl lays crying. The doctor explains that no one has yet come to see her because the family is still in mourning.

"The mother is upset, it's the second daughter, they expected a son," Ain-ul-Ghazala says, "The mother was crying, it was quite upsetting."

Her reaction is hardly unusual here, "It's still a bad thing to have girls," Zafar explains.

Still, she says she's not too worried about the family's reaction. She's used to it. In a few days, she predicts, the family will come to terms with the birth of their daughter and learn to love her.

But families who walk out of clinics like Race View don't always come to terms with the birth of their daughter. Bilquis Edhi, a 64-year-old woman we spoke to who runs an orphanage in Karachi, has seen proof of that first hand.

Along with her husband, Abdul Sattar Edhi, Bilquis runs their orphanage in the bustling Saddar Town neighbourhood, and a quick glance at the shelter makes clear that it's mostly girls who get left here.

"Since the beginning, more girls come here than boys," she says. "I think people don't like to give boys away."

These girls are often the lucky ones.

At the entrance of the orphanage is a silver-framed crib, where parents can leave unwanted children, no questions asked. Above it, an Urdu poster reads, "Don't kill the baby, leave the baby alive in the cradle."

Edhi says she sometimes finds dead baby girls in the crib in front of the shelter. She suspects that families worry that, if they leave their daughter alive, someone will come looking for them to ask why they abandoned the child, or even ask them to take her back.

She pulls out a photo of a baby girl that had been left in the crib recently. "Look, they have burned her to death," she says. The photo shows a newborn, its umbilical cord still attached, whose tiny body is fully blackened.

"Pakistan is more or less a failed state. The government is not doing anything about this problem."

But, even amid this despair, there is some hope. Edhi proudly notes that her orphanage has helped almost 20,000 boys and girls. "The children I have taken care of have become engineers, doctors, believers of Quran, good human beings," she tells me. "I have even sent girls to America," she adds with a smile.

Son preference, and its contribution to shifting the balance of the sexes, has been heavily studied in India and China. Klasen says that Pakistan has a similar problem but is often overlooked.

"If you look at the world, you see that India and Pakistan and China really stick out," he says.

But Pakistan rarely faces the same scrutiny as India or China, he notes. One reason might be that experts like Klasen haven't been able to adequately study the problem here, because Pakistan hasn't had a census since 1998, making reliable information difficult to come by.

Census data from India and China have allowed experts to closely monitor the sex ratios, watching how they change by region and over time. Pakistan's lack of solid data has left the problem there largely hidden.

"We don't have numbers for Pakistan," says Klasen. "Pakistan has been in the news for many other things and it's a very unstable country," he adds, "I don't think we will get more information soon."

In its 1998 census, Pakistan showed an overall sex ratio of 108 males to 100 females. India, in its census in 2001, had 107 males to every 100 females. In an academic article from 2003, Klasen estimated that 7.8 percent of Pakistani women and 7.9 percent of Indian women are "missing." His research, he says, suggests that Pakistan's situation has not improved since then. In a country with an estimated population of 177 million, those "missing" women and girls could number in the millions.

Researchers like Batool Zaidi, the senior program officer in Pakistan for the Population Council, an international NGO that studies reproductive health, say it won't be easy to tackle the problem without first getting hard information. "We desperately need census data to get more accurate estimates of several demographic indicators, sex ratio being one of them," she says.

There's an economic aspect to son preference in Pakistan: it costs less to have a son, as daughters require large dowries to marry off, and sons are often a pension plan for parents.

"A general low status of women in these societies, plus these marriage and old-age arrangements that favour sons, combined, create this problem," says Klasen.

A recent United Nations report on sex selection cites the Population Council's research that only 20 percent of females in Pakistan enter the labour force. This means that most women in Pakistan can't support their parents financially after they retire. Because the government offers little or no assistance for retirees, someone has to take care of Pakistan's elderly, and that responsibility typically falls on sons. For parents here, having a son often means having a retirement plan, while having a daughter can mean losing your savings to the dowry.

As Pakistan's population boom continues to slow, its skewed sex ratio could worsen, Zaidi predicts. "Before, skewed sex ratios were not that much of an issue in Pakistan because fertility was high, so to put it crudely people were having lots of sons and daughter, but now that the demographic transition has begun and fertility has started declining we are seeing more evidence of skewed ratios," she says. "So this is the time to address this issue, because if left unattended it is only likely to get worse."

As more women get access to ultrasounds in Pakistan, Klasen adds, sex-selective abortions could become even more common. In China, access to ultrasounds is already widespread and the sex ratio is predicted to improve over the long term. "For example, in China we strongly believe that it will get better in the near future. But the worst is yet to come in Pakistan," Klasen says. "Pakistan is more or less a failed state. The government is not doing anything about this problem."

Abortion is illegal in Pakistan except in cases where the pregnancy puts the mother's life in danger. But the law has done little to stop doctors and midwives from routinely performing abortions.

The Population Council's research found that educated women and women from wealthy families, who likely have easier access to ultrasounds, are also more likely to give birth to sons.

Such women are a common sight at the Race View Clinic in Lahore. Here, Zafar says that mothers tend to become pickier about the gender of their babies as they have more. "One girl is quite alright, but after that people don't like to have girls."

This story was made possible by a South Asian Journalists Association Reporting Fellowship, the Pulitzer Centre on Crisis Reporting, and the Fund for Investigative Journalism.