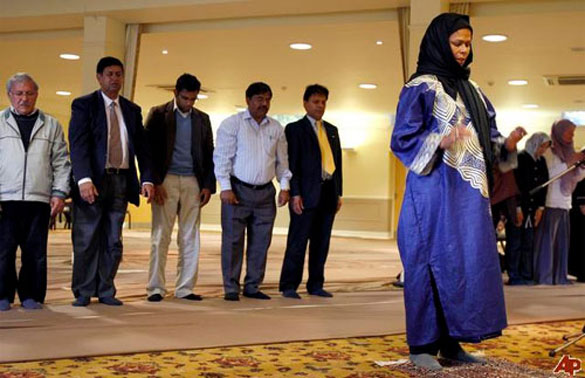 In 2006, a colleague and a dear friend, Professor Amina Wadud published her Inside the Gender Jihad: Women’s Reform in Islam. (Oxford: Oneworld) It comprised in large part of previously published articles wherein she details some of her personal encounters with colleagues and other Muslims in what she describes a ‘the Gender Jihad’ – a term first coined in the early eighties by the Gender Desk of the Muslim Youth Movement of South Africa. In that work I came in for some serious criticism.

So why respond now even if with much reluctance?

First, I am not a particular fan of the radd (rebuttal) genre in Islamic discourse, nor a great fan of my own work. I rarely listen to or watch my own interviews. I never ask interviewers to send me a copy of the material before or after it gets published. I do read reviews on my work and while I have learnt from some while others may have irked me, I have never responded to any. I have inclined to the position that one speaks and acts and let the reader or observer make of it whatever he or she wants to. If there is a consistent pattern of my being misinterpreted then, then my first recourse is to reconsider how I articulate my views rather then gun for the interpreter. (I, for example, continue to be stung by how frequently I am described as a ‘liberal theologian’; but that is a story for another day.)

About two months’ ago a publisher approached me with a request to write a comment for the back jacket of a forthcoming book written by a friend. The request was – as usual – accompanied by a draft of the manuscript. I glanced at it and responded that I would be delighted to do so. I sent in my very laudatory comment about two weeks ago but something continued to niggle at me very badly. The manuscript contained what I felt was a rather scurrilous comment on me and it was based on an incident that I had an entirely different recollection of.

The event was Professor Amina Wadud’s pre-Khutbah (sermon) lecture at a Cape Town mosque more than twenty years ago and her follows an excerpt from that manuscript that I was asked to review. (Published with permission)

"But [Amina] Wadud also criticizes her supposed allies in the fight against conservatism. For one thing, women were marginalized and excluded even in progressive discussion; for another, they were only being used and no one was interested in their own views. In Inside the Gender Jihad Wadud describes how she was invited to a conference on Islam and civil society in South Africa in 1994. No one had informed her that she was to hold the Friday prayers in the Claremont Main Road Mosque in Cape Town. She was outraged that the decision had been made over her head. But there was still worse to come. Farid Esack, one of the organizers, later stated that he hadn’t heard her sermon. Still later, however, he wrote about the event in his book Qur’an, Liberation and Pluralism. The event ended up looking good. It was seen as progressive; to have a black woman lead the prayer in South Africa seemed a twofold revolution. But Farid Esack had no interest whatsoever in what she had to say."

I faced a bit of an ethical dilemma. Here I am sitting with an unpublished manuscript. Should I alert the author to my side of the story? Is this not an unacceptable form of censorship? Should I wait for the book to come out and then tell my side of the story? Why wait until then? But then, this thing happened exactly twenty years ago, why bother at all?

For better or for worse, and after much hithering and tithering, I decided to alert the author to my side of the story.

Professor Amina Wadud presented her account of her historic pre-Khutbah talk at the Claremont Main Rd Mosque in Cape Town in her work “Inside the Gender Jihad” (Oxford: One world, 2006). An earlier version of this account appeared and this itself was based on a talk that she had delivered at the Annual Meeting of the American Academy of Religion. When I first read her account and rather scathing attack on me (and another colleague) running into quite a number pages, I was pretty angry but reprimanded myself; “Farid, relax”, I told myself, “You, males protest far too quickly when accused of sexism; Finish reading the book, put it down, chill out, and read it again, another time. Men need to listen!”

Since then, Amina and I have had many encounters all over the world, all of them extensive and pleasant, she has spoken at my university – the University of Johannesburg – on my invitation twice, and both of us had the delightful honour of having an American Academy of Religion session entirely devoted to a conversation between us last year.

That Amina’s account of my response to her pre-Khutbah is the only one on record and that other scholars are now basing their works solely on that account compels me to put mine on the record.

First, I was not one of the organizers of this event. I was engaged in post-doctoral studies in Germany at that time, had flown into South Africa for the same conference in Pretoria as she did, and arrived in Cape Town after she had arrived there. I was informed by the Imam, of the mosque, Abdurrashid `Umar, the day before that Amina would be delivering the pre-Jum’ah lecture. He checked on whether I would be present because ‘it would be good to be there in solidarity”. I felt honoured. It was often common practice at that mosque in those years that the guest speaker was escorted into the mosque by the Imam. Given that this was an exceptional – even historic – event, Amina was escorted into the mosque by the Imam - Abdurrashid `Umar – then Dr Ebrahim Moosa and myself. I speak under correction, but am pretty confident that decision to form a semi entourage was an on the spur of the moment made in the adjacent office of the mosque.

Soon after her lecture, Amina asked me what did I think of it. I replied: “Amina, to tell you the truth, I was so overcome by the momentousness of the occasion that I did not pay much attention to the content of your talk.”

This was not a polite version of “You gave a crap talk, but I am not going to tell you that directly” – the British version of “Interesting”. Quite the contrary.

I recall Amina’s lecture being very eloquent, soaring and, above all, deeply moving. I sat there feeling enormously privileged to be a part of such a wonderful historic occasion. For the first time in the known history of Muslims, here was a woman albeit from a dais in front of the minbar (pulpit) delivering the main lecture to a Jum’ah (Friday) congregation in a rather mainstream mosque. I had for long written about and advocated for gender justice and was overcome by the occasion – not unlike a lover of poetry sitting through a Musha`irah (poetry reading), listening to an exquisite performance but understandably not engaging rationally or intellectually with the contents of the poetry.

Those of you who have had the fortune of listening to Prof Wadud will know that even the most ordinary of talks she can present in a profoundly moving style with exceptional eloquence.

When she asked me immediately afterwards what I “thought” of her talk, I was both not in a space where I wanted to engage its contents cerebrally nor was I capable. It is simple as that.

Yes, my inability to comment on the content of her talk had everything to do with the fact that it was a woman who delivered the talk. It is, however, not true that “Farid Esack had no interest whatsoever in what she had to say.” This is unfortunately the impression that is conveyed in Amina’s work. She is, of course, entitled to her impressions.

I still believe that men must listen when women speak and that we should guard against knee-jerk defensiveness when accused of sexism.

However, I am also entitled to my side of the story – even if it is twenty years after the event.

Readers may well wonder, “Why on earth did you not raise the matter with her personally if you guys are such good buddies as you claim you are?” I have been in touch with Amina recently as I discussed my idea to open/close this matter and she had a pretty wise response which I quote here with her permission.

"Watching my adult children in their sibling rivalry, I note that some people have to thrash out all the detailed points of a disagreement before they can move forward; some let by gones be bygones, without a word of reconciliation; some work their way back together through circumspect. I rather think we did the latter. And I'm okay with that."

Farid Esack is a Professor at University of Johannesburg