Ahed Tamimi Is Malala without a Prize 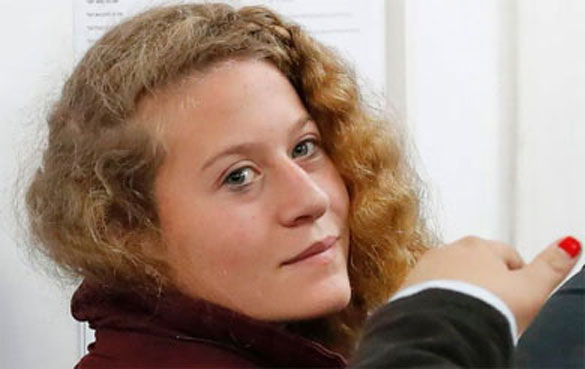 In February 2015, a mural of a playful kitten appeared on a broken wall in a broken town of Biet Hanoun, Gaza Strip. The brightly coloured mural was created by Banksy – a world-renowned yet elusive street artist – on the remains of a house destroyed by Israeli shelling during a 50-day military operation.

The mural defies the solemn atmosphere of a war-torn place, but makes a crucial point about the sort of things that the world cares about, and the kind of mess it ignores. The point here is simple: had the documented devastation of Gaza been a cat video instead, would the internet have paid more attention?

Ahed Tamimi is not a kitten with a ball of string. She is not a meme, a prank, or a funny video of stunt gone wrong. Ahed Tamimi is a 16-year old girl in Israeli custody, fast becoming the new symbol of Palestinian resistance.

Ahed has exposed the Israeli forces’ age-blind brutality the way Malala laid bare the barbaric nature of the Taliban. I can sense the temper of pro-Israeli readers bubbling at this comparison, but if you believe that a military occupation can be excusable depending on whether it’s done by ragtag team of religious militants, or a recognised state, then this piece may not be for you.

I also understand the liberals’ consternation about comparisons involving Malala and other oppressed Muslim girls. “Why Malala? Why not Nabila, the drone strike victim?” The key difference with my comparison is that I intend to challenge neither the bravery nor the righteousness of Malala Yousafzai. She is both. Her international recognition and her Nobel Peace Prize, are both well-deserved.

The truth is not as simplistic as the western media not caring about Muslim heroes and Muslim achievements. They do, and these are all duly acknowledged and applauded; but only if these heroes and their achievements happen to be in line with the west’s vision of a good world.

The west’s vision of a ‘good world’ is largely free of Islamist militants. The Mujahideen have outlived their usefulness, now that the US no longer needs them for a proxy war about the Soviets. Communism has been beaten back and the imperialists cannot fathom why the Islamic militants still exist in the post-Charlie Wilson world.

The west’s vision of a ‘good world’ does not include Palestine or the Palestinian people. The US has decided to withhold a $65 million humanitarian donation to Palestine. One may argue that the US owes nothing to Palestine, and each dollar given to these tattered territories is a gift that they must accept with a loud ‘thank you’ minus a hint of sass. But one may wish to consider USA’s annual military aid of about $3.8 billion to Israel, which directly impacts the Palestinian people’s capacity to rebuild their broken schools, hospitals, and socio-political structures.

Consider what Ahed and her family have done for the Palestinian people. Ahed has frequently been accused of starring in fake Palestinian propaganda videos for what’s derogatively described as ‘Pallywood’. Special thanks to real Israeli soldiers for providing the special effects – surely this propaganda could not have been achieved without them.

Ahed has been videotaped and photographed many times confronting the Israeli forces, resisting one act of oppression or the other. Ahed bequeathed her childhood to the Palestinian resistance. This is resistance against a nuclear-backed army that constantly boasts its military prowess (they won a war in six-days, after all), while simultaneously trembling in its boots after being slapped by a 16-year old Palestinian enemy.

Ahed slapped an Israel soldier moments after learning that her 15-year old cousin had been shot in the head with an Israeli rubber-bullet. Ahed’s family has made countless financial, social, and physical sacrifices resisting the Israeli occupation. Her older cousin, Nur Tamimi, is reportedly the ninth member of the family to have been arrested by the occupying force.

The western utopia has no place for activists like Ahed Tamimi. In this ideal world, girls like Ahed either do not exist, or exist quietly in broken towns with broken walls that we would rather not pay attention to; unless a renowned British street artist paints a large picture of a cat somewhere around the premises.

Malala needs to be seen because she symbolises the Muslim world’s rejection of Islamist violence. But more importantly, she needs to be seen because her interests are, by sheer chance, aligned with imperialist interests. The part where Malala condemns drone strikes or donates money to reconstruct schools in Gaza destroyed by Israeli raids, is the part we need to fast forward until she starts talking about the Taliban again.

Ahed is a Malala whose existence the imperial powers will never acknowledge. But she is one that we – the rest of the world – must wholeheartedly embrace.