Maryam Mirzakhani, The Iranian-Born Mathematician Who Shattered Stereotypes About Women's Ability in Mathematics 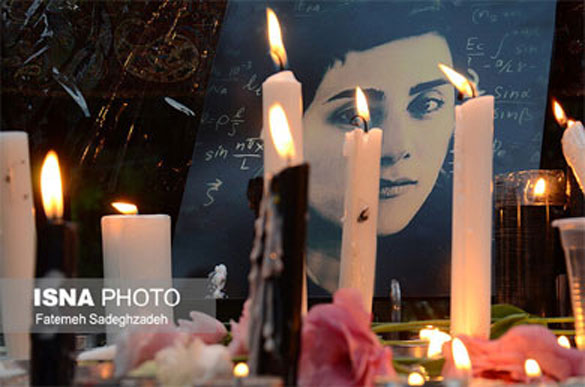 At 2018 World Meeting for Mathematics held in Rio de Janeiro, Brazil, Iranian Mathematical Society proposed designating Maryam Mirzakhani’s birthday (May 12) as a day for celebrating women in mathematics. The proposal was approved.

Still, some believe that studying math is not appropriate for a girl, and to justify their beliefs, they are making biological differences between men and women.

They generally refer to global scientific awards for their claims. Awards that are less than 200 years old, while many women throughout history have struggled with the stereotype and their work is a refutation of statements denying women's ability in mathematics.

Later, she earned her Ph.D. from Harvard University and was a leading scholar on the dynamics and geometry of complex surfaces. In 2014, she became the first female winner of the Fields Medal, the most prestigious award in mathematics.

Although Mirzakhani passed away in 2017, her invaluable contributions to the field of mathematics endure, and her trailblazing career has paved the way forward for many women mathematicians to come.

Zahra Goya, a professor of mathematics at Tehran’s Shahid Beheshti University, said about Mirzakhani that Maryam Mirzakhani was not just a great temporary show, the next generation should know that Iran’s rich culture for the pursuit of science recognizes no boundaries, including gender, except for scientific ethics.

Perhaps Mirzakhani's rich intelligence was not in mathematics, which made her so famous. Mirzakhani's personality traits also set her apart from the rest.

Mirzakhani's colleagues say of her "Mirzakhani was committed, ambitious and fearless in the face of problems, and always instead of choosing the easiest way to solve math problems, she would always challenge them.”

This prominent Iranian mathematician was not only interested in mathematics. In one of her few interviews, Mirzakhani said that as a child she did not intend to become a mathematician but she was very interested in reading books and writing stories and thought that one day she would become a writer, but after encountering disappointing issues in literature, she eventually discovered a passion for mathematics and proved herself to be the best at it.

Amir Jafari, a professor of mathematics at Tehran’s Sharif University of Technology, also says "Maryam's interest in literature as a child led her to develop mathematics according to the components of literature and fiction.” In addition to her exemplary intelligence and perseverance, Maryam's imagination has led to her success. Imagination is very effective in advancing science. Because knowledge is limited and imagination is unlimited.

The United Nations Women, a UN entity for gender equality and women's empowerment, have honored seven women scientists, including Iran’s Maryam Mirzakhani, who have made significant contributions to the field of science, highlighting their world-altering and trailblazing careers.

The National Academy of Sciences of the United States has launches an award named after Maryam Mirzakhani for her efforts and achievements, which are awarded each year to exceptional contributions and advances in mathematics.

In Iran, Maryam Mirzakhani's family announced the establishment of a charity foundation in her commemoration during a ceremony held at Sharif University of Technology.

According to Ali NaghiMashayekhi, a member of the faculty of Sharif University of Technology, the Maryam Mirzakhani charitable foundation will be established with the aim of identifying talents and provide them with material and spiritual support, as well as providing a platform for the growth and development of the elite.

Recently, a documentary filmed in Canada, Iran, and the United Sates, "Secrets of the Surface" examines the life and mathematical work of Maryam Mirzakhani.