Indian Muslim Woman Shattered All Myths: They Have Been Raising Their Voice for the Protection of the Constitution

By Eram Agha and Sana Fazili

The last three months haven't been quite normal for Khatoonhas. She has not cooked for over 90 days now. She has bought no new clothes. There has been no banter with women and curfew time outings. This is her life in protest mode. She now has no time for the ordinary things in life-- Occupying the streets and browsing social media for fake and real news have been Khatoonhas life the last three months. “We are not privileged like many women from elite backgrounds, who moved with curfew hours. Spending hours out of house is not a normal life for us, and now we are doing this for a reason,” she said.

The reason, she says, is “Hindustan Mein Mussalmano ka Mustaqbil.” 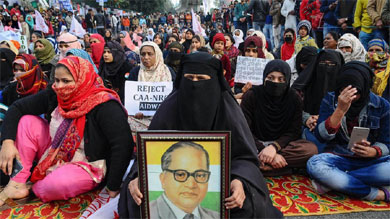 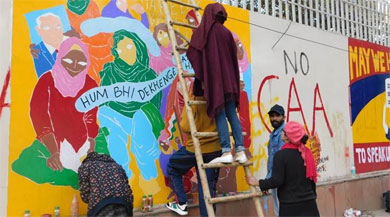 Occupying streets. Breaking myths. Setting the stage. With one protest slogan at a time, the Indian Muslim woman has changed the stereotypical narrative.

Soon after the Citizenship Amendment Act came into place, it was the Indian Muslim women who occupied the streets, set the stage, and rejected the self-appointed saviours within the community and in the government. They got hold of the microphone, and their voice was clear and loud.

As one of the protestors on the stage said, “Amit Shah aur Modi ne…” Immediately, the speech was interrupted by the women of Shaheen Bagh. The women at Shaheen Bagh not only braved nights after nights of sit-ins, but they also ensured that the movement against the CAA does not become politically motivated. There were no crackers burst at the Delhi election results. The Imams and clergy got no space. Prateek Kuhad and Shubha Mudgal sang for them. Together, they raised posters of Dalit leader Chandrashekar Azad as he came to meet them.

Solidarities were forged while the Muslim women constructed their own sentences - sometimes broken while sometimes perfect.

Curfew Hours No More – Fight for the Fate & Future of Muslims

On December 15, following the police crackdown in Jamia Millia Islamia where protesting students were assaulted, the women were outraged with the treatment meted out to the Muslim youth in educational institutes. As a reaction, they occupied Shaheen Bagh to protest against CAA and joining the demoralized students of Jamia/Aligarh Muslim University.

The following days saw the organic multiplication of the crowd at Shaheen Bagh and other areas of Delhi. In the aftermath of Delhi riots many sites have been dismantled, but not the spirit – “Woh Kya Kehtein Hain…Main Akela Hi Chala Tha Janib-E-Manzil Magar Log Saath Aate Gaye Aur Karwaan Banta Gaya (I left alone in pursuit of my goals but people kept joining and it became a huge group),” said Shagufta Bano from Gujarat, a frequent protestor in Delhi quoting Majhrooh Sultanpuri and added, “One of the biggest gains is the unity of the people to fight for rights – we are all Shaheen Bagh.”

Rafeeqan stands at the makeshift checking point at 12:00 pm. It is too early for anyone to visit Shaheen Bagh. There is not much crowd so it’s a light hour for her. She is feeding her son who has just recovered from an infection – “I have been on duty for quite some time, some mischief makers tried to defame us. Since then, my role has assumed more importance. After feeding them some food, I will be back on duty.”

She immediately clarifies that she is not neglecting home. She has never stayed away for 12 hours at a stretch – “In fact, my family is behind me.”

We Can Fight Our Battles

Tarrannum Begum who has been sleeping and staying at Shaheen Bagh with the dadis has not gone home to Batla House, “How do we go? We have to fight and have only learned to fight in these three months. The police threw teargas at me, I treated it with some salt. I know the trick to cure the marks and burns."

Tarrannum is joined by other women protestors. "We have all learned how to fight".

The women say it's the students of Jamia and AMU who showed them the threat looming large in front of the community – “detention centre”.

“When the police thrashed the students of Jamia Millia Islamia, I decided to put my foot down and raise my voice for the students. They are our children, when the police assaulted them something broke in us. But we are here to fight,” Tarrannum said.

One of the earlier participants in the Shaheen Bagh protests is Afreen Fatima, JNU student and former student of AMU. In her opinion, the movement has broken many long-held myths and has also paved the way for change.

Speaking to News 18.com, she said, “The anti-CAA protests across India by Indian Muslim women has broken two major myths. One is the idea that Muslim women cannot speak for themselves or are not allowed to. Second is, they can be role models for Muslim women,” she said.

Elaborating on the points, Fatima said, “There was a time, people thought Muslim women need saviours or spokespersons but today they are speaking out their concerns, even if in broken sentences they are out there on stage. All this without any social and cultural capital.”

She said that there was a time Muslim women had non-Muslim role models or crusaders. But today, with the protests, Muslim women are the role models for other Muslim women. "The young Muslim girls can associate with them and relate to them,” she added.

Fatima remembered this one moment when Arundhati Roy passed the microphone to Fatima during one of her addresses at Shaheen Bagh. “She passed on the mic to me!” said Fatima, excitedly.

The women say they have been raising their voice for the protection of the Constitution and have muted the voices of politicians and of religious leaders.

“There are religious leaders who do not give proper knowledge about religion,” she said regarding the practice of triple talaq in India due to the dominance of the conservative clergy. “But now that is not going to be the case. Even in the anti-CAA protests, we sidelined them. We did not allow them to speak from this platform as religious leaders, the same way that we did with the political leaders. No one can befool us about politics and religion now, we have the confidence now. These women will be able to tell their children to stand up for their rights,” said Bano.

Activist Sidrah Patel said it is the time of reckoning for the Muslim Indians. “There's a consciousness like never before because we have everything to lose - citizenship, rights of our children, voting rights. The law is blatantly unconstitutional and anti-Muslim. Coupled with the NPR and the NRC, it is meant to de-legitimize, de-stabilize and criminalize not just Muslims but hundreds of millions of Indians who do not have the requisite documents.”

Patel said, the Muslim woman who are out on the streets and those who are speaking out know that they can't afford the silence. She added, “At the protests, I have seen elderly women cry when the National Anthem is played. They wonder if they can be buried in this land that their ancestors have been laid to rest in. Is there a humiliation worse than that? As a parent, I worry about my child's future as a Muslim Indian. I know that I'm not alone.”

AMU-Jamia See the Sea Of Change

In December last year, when first images of anti-CAA protests emerged from Delhi's Jamia Millia Islamia, women were seen leading the front. Be it confronting the cops during police violence in the university or leading the sloganeering.

Few days later, women of adjoining Shaheen Bagh neighbourhood sat on an indefinite protest demonstration and the protests are continuing till date. For women, the anti-CAA protests have been no less than a revolution. “Women are not just challenging the controversial law, but also the patriarchy,” says Alima (name changed), a student of Jamia Millia Islamia. She adds that the women have been vocal and assertive about their identity like never before.

For women students like Alima, the protests on the street have brought about changes in families too. “Earlier, my brother would ask me to stay away from any sort of protest for the fear of my safety. But now things have changed. He tells me how tremendously the women have led the fight and how we all should be a part of it,” Alima adds.

With the anti-CAA protests being held 24X7, the public spaces around such places have become more acceptable to the presence of women.

“Even if I move out at 2:30 am in the night, I am not met by uncomfortable gazes or moral policing. The women have inspired this movement,” she adds.

Fatima who studied in AMU said there are many young girls who are representing the fight against CAA. Speaking about the changes in Aligarh campus, she said, “Every time protests happened against Vemula, Najeeb or any other movement male students went from the university (unofficially). But this year, it has changed. Girls of AMU are coming to Delhi and speaking on CAA. This is a good change on campus. There are female faces to movements ….”

Zakia Soman of Bharatiya Muslim Mahila Andolan said it is her hope that the “democratic experience will permeate all aspects of their lives. We saw this during the movement of Triple Talaq and now for the fight against biased citizenship law.”

Soman sees the anti-CAA protests as "the direct leadership of community women themselves. The movement is led by women who are directly affected by it.”

“She knows that this a fight for an equal citizenship and right to life with dignity. This is not a battle for Islam but a fight for our identity in this country that our ancestors gave our blood and sweat too," Patel said.

Original Headline:   'We Can Fight Our Battles': How the Indian Muslim Woman Shattered All Myths