The Girl Student Problem: What Ails the Once Liberal Aligarh Muslim University?

Aligarh Muslim University Vice Chancellor Lieutenant General (Retd) Zameeruddin Shah is anything but a Talibani. He was the second in command in the Indian Army which is known for its secularism and liberalism. Shah is the elder brother of actor Naseeruddin Shah, also an AMU graduate, who is himself an institution of liberal ideas. 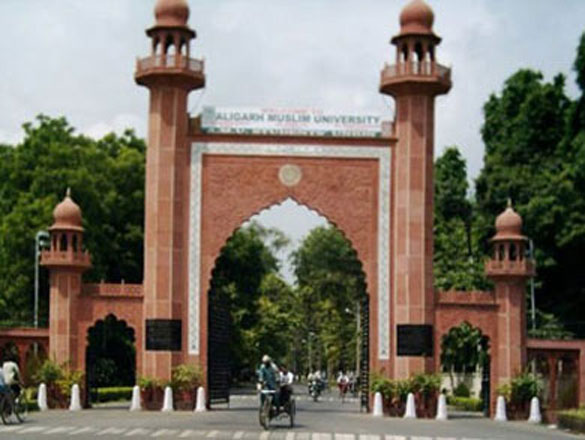 A file photo of the Aligarh Muslim University Ibnlive

In his recent Bollywood venture Dedh Ishqiya, aged Naseeruddin falls in love with a charming Begum Para and describes seven stages of Ishq to attain enlightenment. Taking a cue from the movie, is the Vice Chancellor scared that all his male pupils will fall in love with their female counterparts if they visit the library together? Not really.

Why then does Zameeruddin Shah believe that all male students will flock to the Maulana Azad Library if girl students are allowed entry to one of finest libraries in the country? Shah's comment suggests women are actually a commodity to be preyed upon and it should be condemned in strongest possible terms.

My reference to Dedh Ishqiya is important here because the film has a reference to Aligarh Muslim University. In one of the scenes, Naseeruddin Shah's character describes the “friendship” of two female protagonists with the word Lihaf meaning quilt in Urdu. Lihaf (The Quilt) is actually a short story written by renowned Urdu writer Ismat Chughtai.

Chughtai studied to be a teacher in AMU and her story Lihaf deals with homosexuality in Aligarh. The story, written in 1941, was banned by the then British government after being deemed obscene. The matter was taken up in a Lahore court and Chughtai won. AMU never banned the story or its author, and it can still be accessed in Maulana Azad Library, which female undergraduate students today are struggling to get into. Zameeruddin Shah, incidentally, has also banned the journalist who first reported his sexist comments from the AMU campus.

The issue, which received attention in the national media, is neither about access to Maulana Azad Library nor about the poor infrastructure of the women’s college. It is about AMU’s public spaces and the position of women in a highly patriarchal society.

Two years ago, a woman activist teacher who started the campaign to get women students in the library called me to know my views on the subject. I dismissed it considering it to be uncalled for. There were reasons for it.

The AMU women’s college, also known as Abdullah Girls College, lies on a separate campus. This campus is like a mini city where the female students live and study. The students are allowed to come out of the campus only on Sundays and only during the day. The women’s campus has shops, including cyber café and even a beauty parlour, and the students get everything within its four walls. The college has a library too.

It is important to note that only students studying in the BA and B Sc courses live on the women’s campus. These students have no access to the Maulana Azad library, which is the central library. The women students of professional courses like engineering, medicine, LLB, B Com, and all post graduate courses live in normal hostels and have equal access to everything that their their male counterparts do. There are many universities, including Delhi University, which do not allow students from colleges outside the main campus in the central library.

I asked the woman teacher: What is the use of having membership of the main library when the students come out of the women’s college campus only on Sundays? Even if they get membership, it will be practically impossible to use the library and moreover, there is already a library in the women’s college. Many parents from far away small towns and conservative families send their daughters to AMU just because they know the girl students here will remain “safe” within the confines of women’s college.

“It is not just about accessibility. It is about our rights. It will be symbolic that women have equal rights in AMU,” the teacher replied.

Setting aside the argument about accessibility, my experience at AMU tells me that women on the university are considered an entirely different species from a distant planet, irrespective of whether they are students of graduate or post graduate courses.

Though women students of post-graduate courses freely use and study in the central library, the main public space in AMU campus are dominated by the men. If women students move around with their male friends, they would definitely attract attention.

When I was a student of AMU, between 1995 and 2000, a new canteen had come up behind the Maulana Azad Library. When some women started frequenting this canteen for a cup of tea, it became the centre of a public debate that the culture of AMU was being eroded. I witnessed mob fury during the founder’s day (Sir Syed Day) celebrations when a frenzied crowd gathered around a bus carrying students from women’s college to the main campus. The women inside the bus looked helpless and terrified, and the police had to use Lathis to disperse the crowd.

The main auditorium of AMU has a seating arrangement for women on the first floor while the men sit in the ground floor. On every occasion, women have to be escorted to the first floor. Though women post-graduate students are part of the students' union, just one woman candidate has contested for one of the top three posts of the union, and she was unsuccessful. Worse still, no woman candidate ever contested for the staff association elections.

Post graduate courses are conducted in a co-ed medium, but women students of the arts and social sciences have to write their final exams in a separate college, away from the men. The main campus has three major clubs for extracurricular activities related to drama, literary and music. No woman student has ever headed these clubs.

Barring a few exceptions, women students stay away from the main cultural activities. On one occasion we encouraged one of our female friends to perform at a cultural fest in the Kennedy Auditorium. We had a tough time preventing her from being molested. After leaving AMU, I hear there have been occasional performances by female students in the recent past.

The segregation in AMU is attributed to the university’s age-old tradition and Islamic values. However, having studied in AMU for five years and then observing it closely for nearly 15 years I have a different understanding of this enigmatic campus.

AMU had a glorious past. Islamic thought grew along with Leftist ideology, represented by doyens like eminent historian professor Irfan Habib and others. There has been a severe decline in the overall academic culture of the campus over the last two decades. Nepotism in the recruitment of teachers has resulted in stunted intellectual growth.

Unlike other campuses of repute, a majority of teachers in the AMU have reduced themselves to just dictating lectures in classrooms. Debate, dissent, disagreement and rebellion are discouraged brutally. It is hard to see a well-argued pamphlet in AMU campus on any socio-political issue. Teachers who associate themselves with student activism are penalised on some pretext or other. Sometimes it even leads to them losing their jobs. Similarly, genuine student protests and dissent are discouraged, while a group of hoodlums are supported by teachers’ groups and administration as well.

No wonder, the Vice Chancellor recently suspended a teacher for making a comment on Facebook and another one for filing RTIs. The entire campus remained mute spectator to this high handedness and many were vocal in supporting the Vice Chancellor.

In AMU, you can get away with anything if you are the Vice Chancellor, and he can afford to make a sexist comment or take strong action. The Vice Chancellor is surrounded by a small group of teachers who will praise his every action. Any disagreement will be considered un-Islamic. The Vice Chancellor is made out to be a de-facto Imam (leader) of the Muslim community. Zameeruddin Shah, while defending his statement on restricting women students, said he had to take care of the concerns of the Muslim community and that he was trying to change them.

The root cause of the problem in AMU is the way every issue is linked to Islam. This is cleverly done by the powers to maintain status quo. Every attempt to highlight corruption and malaise is viewed as an attempt to defame the AMU and, by extension, Muslims and Islam at large.

The teachers gradually get a hold over the Vice Chancellor — who is mostly an outsider — and then control him. Zameeruddin Shah’s statement is merely a reflection of the fact that he is totally in control of the same group of teachers whose interest lies in ensuring the university remains backward.

AMU showed a poor intellectual response to the recent media onslaught. A section of the administration ensured that only parochial views were expressed on behalf of the university in the media. This was result of the internal power struggle to weaken the Vice Chancellor. The ultimate loss was that of the students, and only resulted in further stereotyping of the Muslim community.

Ehtasham Khan is a special correspondent with IBN 7