An educational project in India is encouraging Muslim women to take up photography, in defiance of a controversial fatwa issued earlier this year that said the practice was “unIslamic.” 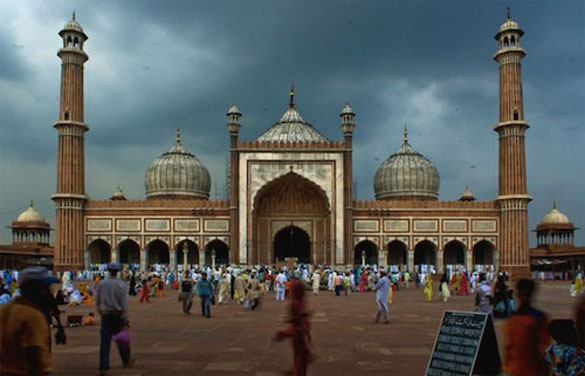 Woman’s advocacy group Aawaaz-e-Niswaan — which is based in the Mumbai suburb of Kurla — has trained more than a dozen women in photography skills, going against of regional customs and, now, this particular fatwa.

Haseena Khan, founder of the project, explained that she had been thinking about new ways to help Indian women break out of restrictive traditional roles when she hit on photography. Training women to use cameras would not only open new career paths, she reasoned, but encourage them to mingle more openly in a society that expects women to stay in the background.

Khan recruited professional photographers to help teach students, with the one requirement being that they had to work outdoors, in public. The students, most of whom had never held a camera before, faced up to the challenge, capturing scenes ranging from celebrity appearances to wife-beating, often while wearing a Burqa. 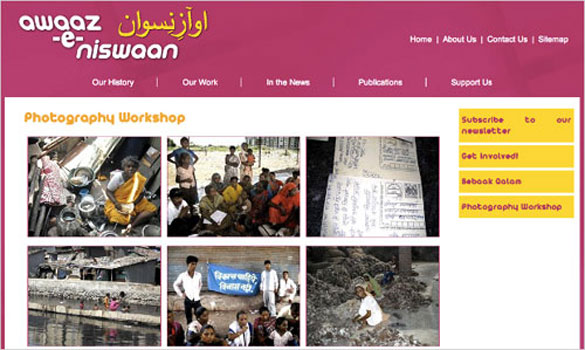 Khan said the recent fatwa, in which the head of the country’s leading Islamic seminary declared photography “unIslamic” and unsuitable as a career for Muslims, simply adds more urgency to her work. “The fatwa reeks of the medieval mindset,” Khan told The Times of India. “Just as writing brings catharsis to writers, photography is a way of feeling liberated.”

A group of six women are seated in a spacious hall, their sights trained at a bunch of photographs adorning a wall. The photographs were shot during various field trips these women undertook over the last few years. "They tell stories of women's emancipation, their struggle to find their space in society," explains Ayesha Shaikh.

Women are surprised that the seminary's fatwa department, replying to an engineering student's query on whether he should choose photography as a career, said: "Photography is unIslamic. Do not do this. You should search any suitable job based on your engineering course." The women collectively ask a question: "What do they tell some of India's leading clerics who attend sessions of All India Muslim Personal Law Board and happily get captured on videos and cameras?"

Khan adds her centre decided to encourage Muslim women to take up photography as a career also to explode the myth that it is a "man's job". "A camera is almost always associated with men. Why don't we hear of camerawomen more often?" asks Reshma Pawaskar, a volunteer at the centre who too trained as a photographer. In 2008, Aawaz-e-Niswaan had organized a workshop at Khandala. During discussions it emerged that the participants should do something liberating yet not popular among traditional Muslim women. Significantly, many of the women were divorcees and had to look for vocations. Choosing photography as a vocation was something they had not dreamed of. Luckily, senior photographer Sudharak Olwe agreed to volunteer as a trainer.

Most of the women had not held a camera before and had seen a photographer only during wedding ceremonies. One of the conditions to be part of the team was that they would have to shoot outdoors. So sharing one camera between two, these women shot choked, open drains, women selling fish and vegetables, and a man beating his wife.

"I was scared to step out of home before I learnt photography. I was shy. Now, I confidently commute to work," says Shabina Shaikh, who works at a photo studio. Like all photographers, these women too have had memorable moments. During training, many of them would move in Burqas by choice. "We wanted to know the reaction to Burqa-clad photographers," says Khan. A couple of years ago, Pawaskar went to cover the annual LGBT rally. Actor Celina Jaitly was among the celebrities who addressed the rally.

Holding her camera, Pawaskar scaled a wall for a better view. "Seeing a woman photographer in Burqa, other photographers turned to me and feverishly started clicking. For a moment I overshadowed Celina," recalls Pawaskar, whose family was apprehensive initially but are now proud of her passion.

Cameraderie': A field trip to Marine Drive was part of the photography workshop held for these women in Mumbai to help buildnew skills and empower them. - AAWAAZ-E-NISWAAN/ WFS

Against a dark wall, a white goat cranes its head at an impossible angle, strangely reminiscent of a yogic pose; luminous-eyed boys dredge a vessel for the last drops of tea; a smile flashes through a half-raised naqab (veil). The photo exhibit, ‘Zist Tarashi', which premiered at the recent Kala Ghoda festival in Mumbai, offers glimpses of spaces and relationships one would never have seen, had 16 young Muslim women not chosen to share them with the world.

Images at ‘Zist Tarashi', or Sculpting Lives, were shot during a photography workshop in July-October 2009, jointly organised by Mumbai-based women's groups, Awaaz-e-Niswaan and Point of View. The participants were Muslim women between 15 and 28 years of age from localities such as Kurla, Nagpada, Sewri, Mazgaon and Bandra. Many are survivors of domestic violence, either divorced or seeking divorce, poorly educated and lacking employable skills. They were taken under the wing by Awaaz-e-Niswaan, an organisation that works for empowering Muslim women in Mumbai.

After it helped them settle their marital disputes, restoring confidence and making them self-reliant was the next step. Learning a new skill builds confidence — especially photography, which imparts varied lessons. “Turning them into professional photographers was never the objective of the workshop,” clarifies Hasina Khan, a senior member of Awaaz-e-Niswaan. “Giving them a sense of empowerment was.”

The workshop and after

The workshop was conducted by Sudharak Olwe, ace documentary photographer and head of the Photography Promotion Trust. He had done this kind of exercise before, at a workshop for women at Chitrakoot, Uttar Pradesh, where he had taught participants to make photographic records of violence against women in such a way that they would stand as legal evidence. Olwe had seen a startling transformation in the attitude and confidence levels of the women in Chitrakoot at the end of the exercise.

But the Mumbai workshop presented a different challenge. “These girls came from a conservative community with rigid beliefs regarding what women may or may not do,” he recalls. Photography fell in the ‘forbidden' category, and there was fierce opposition from the families of many participants. Strenuous efforts were made to dissuade them from attending the workshop — some had large amounts of domestic work piled on them so that they could not go; others could not arrange the money for transport. But, undeterred, friends Shabina Shaikh, 18, and Rahima Shaikh, 19, from Bandra Tata Nagar walked five km to be a part of the workshop, held in Awaaz-e-Niswaan's Kurla office. “These girls have spirit,” says Olwe, with admiration.

At the workshop, which was free for the women, Olwe's first task was to convince his students that “Muslim women” and “photography” were not mutually-exclusive terms. Once their doubts were removed, the women were given a camera to hold — it was the very first time some of them had done so. “I almost dropped it when ‘Sir' told me that it cost Rs 3 lakh,” laughs Rubina Gudekar, 28, a victim of domestic violence from Mazgaon. However, this expensive camera was not the one from which they shot their images. For the actual pictures, they were lent eight basic digital cameras (one shared between two girls) that cost around Rs 5,000.

Olwe taught them the basics — framing, zooming and using the flash. Technical details such as aperture, depth of field and composition were mentioned in passing. “Sir told us our pictures must say something meaningful,” recalls Ansari Paigambari, 25, from Bandra. Divorced at 23, within two months of marriage, Paigambari has done her matriculate, a course in nursing and even worked for some time at Bandra Bharat nursing home.

The students followed this instruction to a ‘T' — and the stories that their pictures tell are there for everyone to see. Some photos are cheerful records of everyday life; some take a critical look at injustice. Some are discomfiting. A peeling wall here, a cramped space there, a sparsely furnished kitchen unwittingly betrays the strained circumstances of the occupants. “The pictures, though technically imperfect, work because of their raw, spontaneous quality,” observes Olwe.

While working in public spaces — they took pictures of their homes and everyday surroundings, besides some special place such as a bakery, an embroidery sweatshop, a fish market, an orphanage, a wedding, Chowpatty beach and even a dentist's clinic — the “burqa-clad photographers”, as they came to be known, drew disapproving looks and unkind remarks like: “Suddenly the milk vendor wants to become a crorepati (millionaire)”. The antagonism was not unexpected and dealing with obstacles was part of the learning — besides derision, there were subjects who refused to be photographed or demanded money to pose.

The impish Rahima sneaked a camera into a ‘dargah' to record women at prayer. Some women even had to answer probing questions by local constables regarding their intentions. Nilofer Sheikh, 20, from Sewri, braved crowds to capture the colourful Queer Azadi parade.

Reshma Pawaskar, 29, who is divorced and with an eight-year-old son, drew wary looks when she went to the docks at 6 a.m. to record the bustle of the fish market. “My ‘burqa', and the fact that I was clicking photos, made the fishermen very suspicious,” she confesses. She was shooed off from there.

There were other firsts for the women — a visit to the Jehangir Art Gallery; a field trip to Marine Drive; manning the information desk at the Kala Ghoda exhibition and fielding questions from visitors and journalists.

For them, life has changed in small but significant ways. They can now deal fearlessly with strangers. At the exhibition, they were comfortable in public even without the ‘burqa'. Their deadlines for returning home have been relaxed. “Now our elders don't scold us even though we stay out until 10 p.m.,” they report happily.

They have personally grown a lot as well. They are a happy, confident, outgoing, and forward-looking group. Reshma and three others, bitten by the photography bug, want to learn more advanced photography — Olwe has promised to help. Paigambari now speaks of completing her 12th standard. Others have no specific aim but chorus, “We want to carve our identity”. This positive spirit is a measure of what has been achieved.

‘Zist Tarashi' was a thumping success. Except for a few Muslim viewers who objected to the ‘inappropriateness' of the venture, all the others, Muslim and non-Muslim, lauded the effort. Invitations were extended to hold similar exhibitions at places like Delhi and Kanpur. Donations were offered, and there was a proposal to make a documentary on the women. A calendar showcasing their photographs sold 500 copies.

None of the women had anticipated this praise and publicity, which was also instrumental in making their families more appreciative. “I am proud of my daughter now,” admits Sabiha Ansari, Paigambari's mother.

It would be untrue to say — caution the organisers — that the photography workshop led to instant self-empowerment. Yet, it would be equally untrue to say that after this experience their lives will ever be the same again.

There was a final surprise in store for the “burqa-clad photographers”. At a felicitation organised by Awaaz-e-Niswaan and Point Of View, chief guest Parvathy Omanakuttan (Femina Miss India 2008) gave a gaily wrapped package to each of them — it contained a brand new digital camera, a gift from the organisers to their courageous wards. The delight with which it was received made a poignant scene. For the women, it was not just a camera — it was a pat of encouragement, a promise of support, and a chance to change their world, through photographs and personal example.

(This article was published in the Business Line print edition dated March 19, 2010)