The image will remain engraved in many people’s memory about the first intifada. A Palestinian woman dressed in a skirt and blouse holds here high heel shoes in one hand and throws a stone on members of the occupying Israeli forces with the other. Clearly the image is not so much about violence as it is about defiance and the integral role of women in the Palestinian uprising.

Match that image with this week’s decision by the Islamic-led powers in Gaza to ban a marathon in the Strip because women had decided to participate in it or the decision last month to apply strict Islamic dress code on female university students. This comparison, while focusing on external descriptions, is perhaps the most telling image of the retraction, rather than the progression, of Palestinian women in the last four decades. 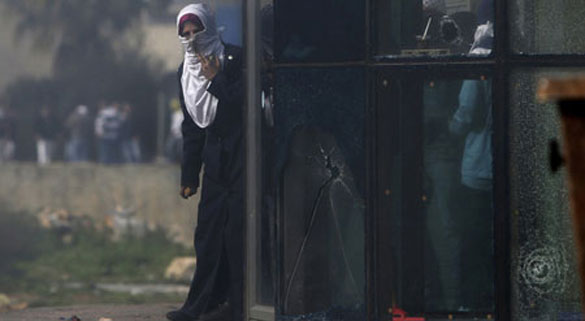 A Palestinian protester holds stones as she stands near broken windows during clashes with Israeli soldiers outside Israel's Ofer military prison near the West Bank city of Ramallah, Feb. 25, 2013. (Photo by REUTERS/Mohamad Torokman)

Other more substantive comparisons of laws, regulations and social attitudes tend to confirm this trend, although there are exceptions.

Under a foreign and brutal military occupation, Palestinian women joined their brethren in all acts of resistance. The absence of a national government gave women a rare opportunity to excel in all levels of Palestinian political and social life. We saw Palestinian academic Hanan Ashrawi rise to a senior position of spokeswoman of the Palestinian delegation to the peace talks in Madrid and we saw women and men create the infrastructure of a state through civil society organizations, educational institutions, unions and other community-based organizations.

Part of the problem has been in the nature of resistance. Whereas the earlier intifada’s main methodology was popular and largely nonviolent, the second intifada erupted and continued for some time using weapons and suicide attacks. And while the first intifada differentiated between opposition to the occupation rather than to Israel, the second intifada erased the green line and carried out violent attacks, often against civilian populations inside the state of Israel. And when your focus is on a military-style resistance rather than popular, the number of participants is usually limited to those trained in military skills and not average citizens. This is a process that naturally diminishes the role of women who are mostly without military training or opportunity because of social restrictions.

While in general the lot of women has retracted in the last few decades, there are exceptions that are noteworthy. The involvement of women in political life has continued and grown in the same period. The existence of a quota for women representatives in local elections has guaranteed a large representation of women. Many have since won elections — as the mayors of Ramallah and Bethlehem show — without the need for a quota. And Ashrawi, who was sidelined for some time, is now a PLO executive committee member.

The elections for the Palestinian Legislative Council (PLC) in 2006 mandated that participating lists and parties include a woman for every third candidate on their list. This ensured that the current — albeit inactive — legislative council included a record number of women legislatures. Thirteen women, six of whom are from Hamas, are current members of the PLC. Five women were elected in the first PLC elections in 1996.

In the past few years, the number of women standing for election in Palestine has increased markedly in running for office, and in winning elections. Records show a clear improvement in the number of women candidates winning municipal elections, often without the need for a quota.

Palestinian women like men are affected by the social and economic conditions. The continuation of the Israeli occupation, the 6-year-old split between the PLO and Hamas, and the separation (forced and unforced) between Gaza and the West Bank has left its toll on Palestinian women.

Palestinian women for decades were the role models and leaders in the Arab and Islamic world for their tenacious struggle for liberation both from the Israeli occupiers as well as their fight for personal independence, demanding equality and empowerment in a conservative society.

This unique status that is often praised on International Women's Day has since elapsed, possibly now being replaced by Tunisian, Egyptian and Yemeni women, the latter of which produced the first ever Nobel Peace Prize for an Arab woman, won by Tawkal Karaman.

Daoud Kuttab is a contributing writer for Al-Monitor's Palestine Pulse. A Palestinian journalist and media activist, he is a former Ferris Professor of journalism at Princeton University and is currently the director general of Community Media Network, a not-for-profit organization dedicated to advancing independent media in the Arab region.